Apoe knockout mice are widely used to study the function of APOE in atherosclerosis, lipid metabolism, and nerve damage. These mice also help to study interventional therapies that can change the atherosclerotic process. In this article, we review the phenotype of APOE knockout (KO) mice and explore its applications in cardiovascular and respiratory disease research. Read on for a comprehensive introduction of how APOE knockout mice are being used as genetically engineered mouse models of disease.

What Does the APOE Gene Do?

Homozygous Apoe knockout mice lack ApoE protein, and the mice develop normally but show a significant increase in total plasma cholesterol levels and spontaneous atherosclerotic lesions. Apoe knockout mouse models can be used to study the role of ApoE in lipid metabolism, atherosclerosis, and nerve damage and study interventional therapies that can change the atherosclerotic process.

Figure 1. In Apoe knockout mice, the lack of peripheral ApoE leads to an increase in lipoprotein particles [1]

After knocking out the Apoe gene, cholesterol is mainly distributed in very-low-density lipoprotein (VLDL) which carries a large amount of cholesterol that cannot be bound by lipoprotein receptors on the cell surface and degraded, thus, the accumulation of cholesterol leads to atherosclerosis. Studies have shown that ApoE-/- mice can spontaneously develop hypercholesterolemia (300-500 mg/dL) and develop significant atherosclerotic lesions under normal diet conditions. The high-fat/high-cholesterol diet that causes atherosclerosis will increase plasma cholesterol levels by more than 1000 mg/dL and accelerate the process of atherosclerosis. The triacylglycerol level in ApoE-/- mice plasma is 68% higher than that of normal mice, regardless of age and gender. Its high-density lipoprotein is only 45% of normal mice. The lesions of these mice mainly occurred in the aortic root, aortic arch, innominate artery, aortic branch, and renal artery bifurcation. Under normal diet conditions, early foam cell lesions can occur within ten weeks; after 15 weeks, they developed into atherosclerotic lesions, and after 20 weeks, they developed into advanced fibrosis. A high-fat/high-cholesterol diet can accelerate this disease process, including promoting the formation of cholesterol crystals, necrotic cores, and calcification.

1. Research on cardiovascular and respiratory diseases in the context of exposure to cigarette smoke and harm reduction

Atherosclerosis is a chronic disease in which systemic inflammation is the basis for plaque accumulation in the arterial intima. The systemic pro-inflammatory status of Apoe−/− mice also makes them become good candidates for the study of chronic obstructive pulmonary disease - which is characterized by lung inflammation, airway obstruction and emphysema – as well as cardiovascular diseases, which also share common risk factors, such as smoking. 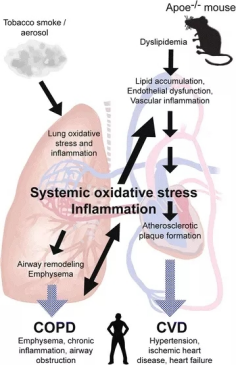 Figure 2. Lipid imbalance, endothelial dysfunction, and systemic inflammation together determine the development of atherosclerosis and lung inflammation in Apoe-/- mice (and humans). [3]

Combining the atherosclerosis mouse model and the technique of measuring hemodynamics in mice can be used to study the effects of hypercholesterolemia and/ or atherosclerosis on cardiovascular function. It can be used to study the interaction of nitric oxide, reactive oxygen species, aging and diet in a mouse model of impaired cardiovascular function.

Nutritional intervention research: the use of different diets (different degrees of lack or increase in nutritional levels) can lead to changes in plaque morphology or cause plaque instability.

Using Apoe knockout mice, we can study the mechanism of ApoE in lipid metabolism, nervous system, immune system, and more. Additionally, Apoe knockout mice can also crossbreed with many mouse models of disease to study the interplay of signal pathways between two model types. Therefore, Apoe gene-edited mice will continue to grow as an indispensable tool for researchers to explore disease pathology, discover the corresponding targets, and quickly evaluate potential treatments.

>> Search Your Gene of Interest

>> Beyond Alzheimer’s Disease – Implications of APOE in Viral Pathology

>> Is ApoE the key to an Alzheimer's cure?

Examples of Gene Therapy Treatments for Rare Diseases
What are the Strategies for Gene Therapy?
What is Gene Therapy? An Introduction to the Research
What are Knockout Cell Lines Used For?