Mucopolysaccharidosis IVA (MPS IVA) - also known as Morquio Syndrome, type A - is inherited in an autosomal recessive manner and caused by mutations in the GALNS gene which lead to N-acetylgalactosamine-6-sulfate sulfatase (GALNS) deficiency, resulting in the accumulation of keratan sulfate (KS) and chondroitin-6-sulfate (C6S). Common presenting features include elevation of urinary and blood KS, marked short stature, hypoplasia of the odontoid process, pectus carinatum, kyphoscoliosis, genu valgum, laxity of joints and corneal clouding; however there is no central nervous system impairment. [1]  There is no cure yet, with treatments based on the signs and symptoms presented by patients.

As an emerging gene therapy tool, the application of adeno-associated virus (AAV) and other delivery systems to compensate for mutated genes has shown great application potential in the treatment of many rare diseases. Bertolin et al. injected adeno-associated viral vector serotype 9 encoding Galns (AAV9-Galns) in MPS IVA rats and found that the activity of GALNS could be restored for a long time (1 year) and the expression level of KS returned to normal, thereby improving the symptoms of the MPS IVA model. This study demonstrates the potential of gene therapy using AAV9-Galns in the treatment of MPS IVA, and provides a strong theoretical basis for the future clinical treatment of MPS IVA patients.

Next, we will interpret this study in detail in order to understand the conventional strategy of gene therapy research in a practical context.

The researchers generated a rat model of MPS IVA carrying the most frequent and severe human missense mutation c.1156C>T, that leads to p.Arg386Cys in the GALNS protein by using CRISPR/Cas9 technology (Fig. 1a). They confirmed the point mutation by sequencing analysis, and three selective backcrosses were performed between Galns+/− and WT rats to eliminate CRISPR/Cas9-associated off-target events (Fig. 1b, c). These rats showed undetectable levels of GALNS activity in all tissues analyzed and presented key features of Morquio A disease at as early as 1 month of age, including: persistently high KS content in liver and serum, as well as a reduction of tibial length. 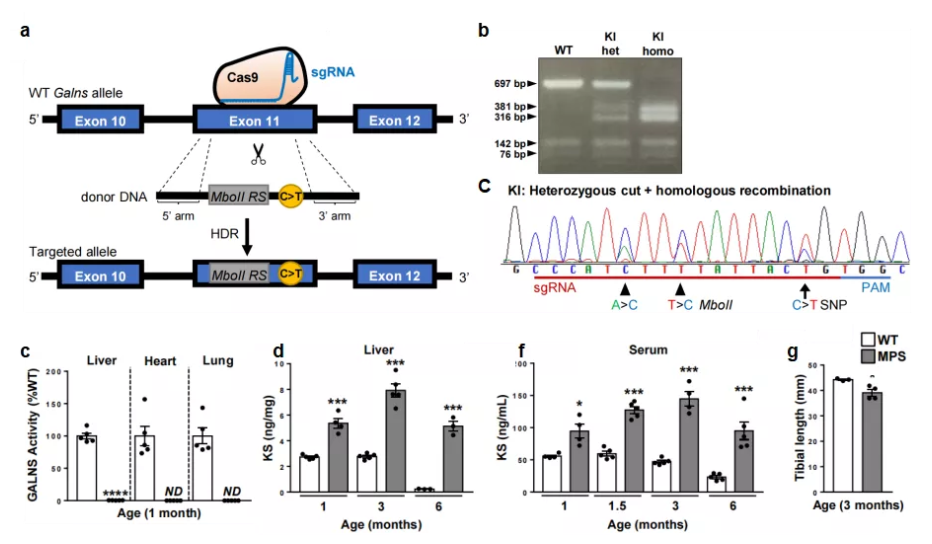 A major challenge in gene therapy for MPS IVA disease is to achieve widespread gene transduction in the skeletal system to increase local concentrations of GALNS, given that bone dysplasia is the most severe alteration affecting patients with MPS IVA. Researchers injected the AAV9-GFP vector into 4-week-old male rats and evaluated the efficiency of the AAV9-mediated gene delivery by observing the fluorescence intensity. Results showed that GFP-positive signal was detected in osteoblast-rich areas surrounding femoral and tibial growth plate (GP) and endosteum, in the inner cells of the compact bone, and in articular cartilage (Fig. 2a).

Moreover, high levels of GFP expression were also noted in all bones analyzed (femur, tibia, forelimb bones, sternum, ribs, and vertebrae) and key peripheral organs in Morquio A disease (Fig. 2a, b).

Short stature is a hallmark of MPS IVA patients and, as such, is a sought after phenotype to observe in MPS IVA research models. Although MPS IVA male rats showed similar body weight to WT rats during the first month of age, an important reduction in body weight and size was observed afterward (Fig. 3a, b). MPS IVA rats also had significantly shorter lifespans, and ~30% of these rats died around 2 months of age (Fig. 3c).

After AAV9-Galns gene therapy, MPS IVA rats gained weight while their survival rate recovered to nearly that of the WT rats (Fig. 3a–c), and the activity of GALNS and the level of KS returned to normal (Fig. 3d–f). Higher GALNS activity was also found in liver and white adipose tissue (WAT) (Fig. 3g, h). Increased GALNS activity normalized KS content in the liver, which was only stored in Kupffer cells and WAT (Fig. 3i–l). In addition, the activity was restored for hepatic β-hexosaminidase, a lysosomal homeostasis biomarker (Fig. 3m).

AAV9-mediated delivery systems have shown potential in the treatment of MPS IVA. Scientists and researchers have made many efforts to treat rare diseases, from discovering genetic pathogenic mechanisms to developing gene therapy approaches, but given the many types of rare diseases, it is an area of research that is difficult for any person or even a single organization to quickly conquer. Cyagen is committed to providing a one-stop gene therapy solution for researchers worldwide, aiming to accelerate gene therapy development for rare diseases, so more patients can get the hope of cure as soon as possible.

Rats are physiologically, morphologically, and genetically closer to humans than mice, making them an ideal animal model for human disease research. The genomic congruence of rats and humans contributes to the greater physiological similarities seen between the species. Compared to mice, rats are more capable of learning tasks and more advanced in terms of cognition and memory, which make them a popular animal model for behavioral studies and neurological human diseases research.

For a limited-time, we are offering a free custom-developed Cre driver rat ($15,000) strain with the purchase of an eligible conditional (cKO/cKI) rat model. Let us help create the next-generation Cre driver strain needed to support your field of study: