When it comes to identifying whether a knockout cell line has been successfully established, in addition to testing the gene sequence with PCR, it is also important to test the protein level measurement using a Western blot (WB) analysis. This is because in some cases of homozygous knockout (KO), the residual protein is still detected in the WB test.

1. Residual protein due to multiple transcripts of the target gene

Genes usually contain multiple different transcripts. When selecting a targeted knockout site, it is difficult to knock out all transcripts, and the unaffected transcripts may be transcribed and translated, causing protein expression with partially functional domains. Therefore, when designing a knockout cell line strategy, comprehensive consideration should be given based on detailed gene information and literature references, to ensure that multiple transcripts are covered as much as possible. Sometimes, conducting a pre-experiment is also necessary.

2. Residual protein due to alternative splicing of genes

Alternative splicing refers to a process that occurs when an exon is damaged or deleted, its transcriptional mRNA precursors produce different mRNA splicing isomers through differential splicing methods, which is an important mechanism to regulate gene expression and increase the diversity of proteins. In knockout (KO) cell line establishment, after the exon is cut at the knockout site, the RNA splicing rules contained in the intron are subsequently damaged. In some cases, the deleted exon sequence is skipped in the RNA splicing stage, and the upstream exon is directly connected with the downstream exon to form a new mRNA, thereby continuing the protein’s translation. 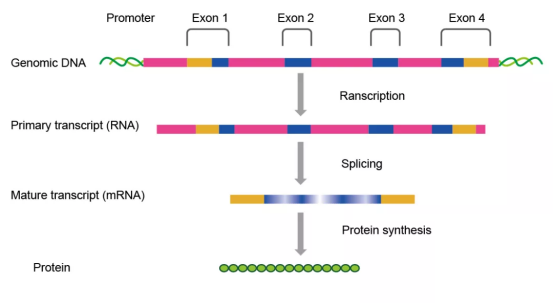 3. Residual protein for the selection of Western blot antibody

Western blot (WB) detection technology is based on the principle of specific binding of antigen and antibody. The specificity of the antibody allows it to recognize a specific amino acid sequence or some part of a functional domain instead of recognizing the whole target protein. Therefore, when using Western blot to detect whether there is residual protein expression in knockout cell lines, if the selected knockout site is downstream of the antibody binding region for the encoded protein, the binding of antibody and N-terminal residual protein may occur, resulting in the appearance of bands detected by Western blot. However, in this case, the function of the target protein may be lost even though the residual protein is detected.

How to Avoid the Risk of Residual Protein Expression

The single most important factor to prevent the occurrence of residual proteins lay in the design of gRNA! The location of the cleavage site is determined in the design of gRNA, so gRNA design is crucial to avoid protein residues, especially for knockout strategies involving a frameshift mutation. Generally, it is recommended to design at least three gRNAs and screen for the best gRNA - according to cutting efficiency in the cell pool stage.

Researchers with gRNA design experience should be familiar with gRNA design websites, but the design strategy generated by such websites can only work as an initial reference. Integrating the design results of multiple databases and combing the relevant literature data, as well as referring to the analysis of commonly used antibody information is required. Performing phased WB test according to the actual situation is also necessary, to ensure there is no protein residue in knockout cell lines.

In addition, if the gene length is short and finding suitable cleavage sites is difficult, we can also adopt the strategy of large fragment knockout or global knockout to ensure that the homozygous cell protein cannot be translated.