In the previous article, we described genes associated with Bardet-Biedl Syndrome (BBS) and focused on the function of BBS5-encoded proteins. In mouse models, what did the researchers find? How does BBS5 knockout/conditional knockout affect mouse phenotype? Please find the answers below, in our Weekly Model research review.

In order to further study the pathogenic mechanisms of mutant BBS5, Bentley et al. simultaneously constructed a conventional Bbs5 knockout (KO) mouse model (Bbs5-/- mice) and a Bbs5 conditional knockout (cKO) mouse model (Bbs5flox/flox mice). The results of the study showed that the viability of Bbs5-/- mice decreased, but the development of cilia was not affected. Bbs5-/- mice are associated with a complex phenotype, including craniofacial defects, shortened skeletal deformation, ventriculomegaly, infertility, pituitary abnormalities, and obesity. For Bbs5flox/flox mice, Bbs5 mutation causes obesity regardless of age. But Bbs5flox/flox mice developed male infertility, ventriculomegaly, and pituitary abnormalities only at the early stages of development. Compared with other BBS gene mutation mouse models, only the Bbs5 mutation leads to abnormal pituitary function, which provides a new option for pituitary-focused clinical interventions. [1]

Bbs5 knockout first (Bbs5tm1a(EUCOMM)Wtsi/+; Bbs5−/+) embryonic stem cells, from C57BL/6NTac background mice, were obtained from Eucomm and injected into C57BL/6 J blastocysts to establish the Bbs5−/− (tm1a) line. The allele was then maintained on the C57BL/6 J strain. Tm1c conditional allele mice were generated by mating tm1a to FlpO recombinase mice (C57BL/6 J), thus removing the LacZ and Neo cassettes and generating a conditional allele (tm1c; Bbs5flox/flox). Progeny that contained the recombined allele were crossed off of the FlpO line and bred to Cagg-CreERT2 males (C57BL/6 J) to generate the tm1d (Bbs5Δ/Δ) allele. Here, we refer to these alleles as Bbs5−/− (tm1a), Bbs5flox/flox (tm1c) and Bbs5Δ/Δ (tm1d) alleles (Fig. 1A). 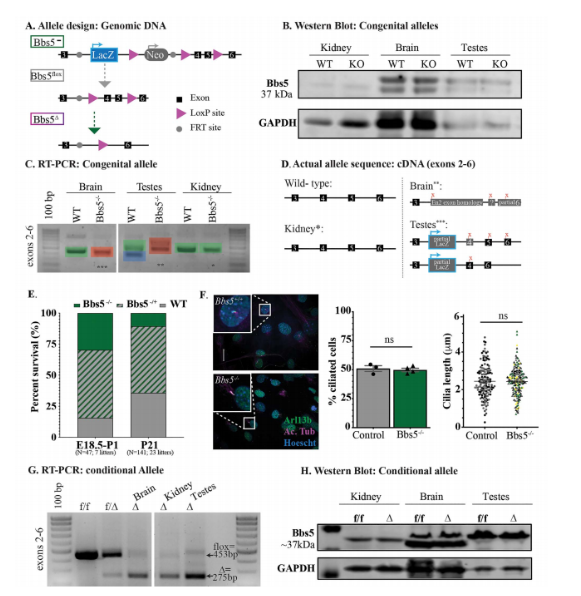 Bbs5−/− mice do not have defects in ciliogenesis

By immunostaining for Arl13b and acetylated α-tubulin, there were no overt differences detected in number or length of primary cilia in analyzed tissues, indicating that Bbs5−/− mice do not display a general defect in ciliogenesis. In addition, Bbs5−/− mouse embryonic fibroblasts (MEFs) form cilia at a similar frequency and with similar lengths as controls (Fig. 1F). The lack of an overt cilia morphology defect is consistent with other core BBSome mutant mouse models.

To determine if Bbs5−/− mutant mice were fertile, researchers performed matings with both homozygous and heterozygous mice. Although both male and female heterozygous mice are fertile, no litters were produced when either the male or female was homozygous for the Bbs5 mutant allele. To investigate whether this could be the cause of the infertility in male Bbs5−/− mice, they isolated the testes and performed histological staining. In Bbs5−/− testes, nonflagellated sperm were visible (Fig. 2A). Furthermore, extraction of sperm from the epididymis of mutant mice also did not yield flagellated sperm, whereas isolation from wild-type (WT) and heterozygous animals did. 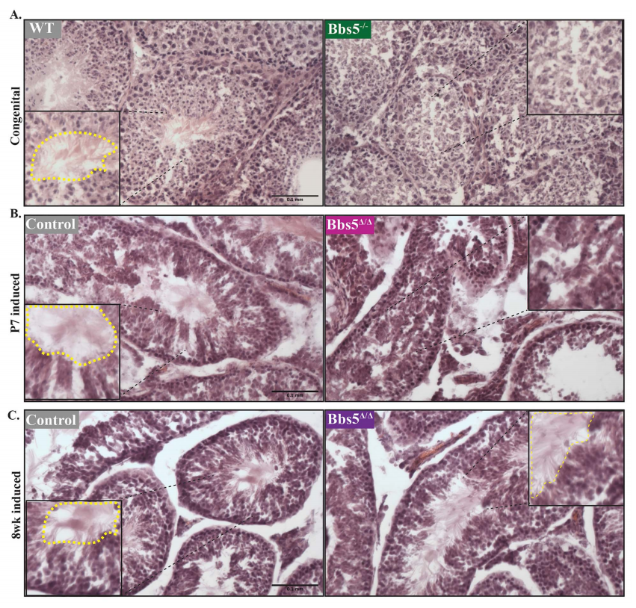 Figure 2. Testes analysis hematoxylin and eosin staining of testes in (A) wild-type and Bbs5−/− mice (congenital), (B) juvenile-induced conditionals (P7 induced) and (C) adult-induced conditionals (8 week induced). Staining shows the presence of flagellated sperm (inside the dotted yellow line) in WT and adult-induced Bbs5Δ/Δ animals versus the lack of flagellated sperm in Bbs5−/− and juvenile-induced Bbs5Δ/Δ mice (Scale bar 0.1mm). [1]

To further evalaute whether this is a defect in development of the sperm versus flagellar maintenance, they utilized conditional Bbs5flox/flox; Cagg-CreERT2 animals and induced Bbs5 loss at either P7 (prior to sexual maturation) or at 8 weeks of age (when sexual maturation is complete). Tests isolated from Bbs5Δ/Δ mice induced at P7 and analyzed at least 2 months postinduction showed a variable phenotype, where five out of eight male mice did not develop flagellated sperm and three mice did develop flagellated sperm. In two out of the three Bbs5Δ/Δ mice that produced flagellated sperm, the number of flagellated sperm appeared to be reduced (Fig. 2B). In the adult-induced (8 weeks) mutants analyzed 10 weeks post-induction, flagellated motile sperm were present in all Bbs5Δ/Δ mice analyzed (N = 5) (Fig. 2C). These data indicate a developmental role for BBS5 during early spermatogenesis events, but not in sperm flagella formation or maintenance.

Cyagen Knockout Catalog Models covers gene knockout mice and conditional knockout mice. We can provide you with ready-to-use Bbs5 knockout mice or generate customized models for you. Contact us to see what research model strategies our experts develop for your next study.