Humans are estimated to have upwards of 20,000 protein-coding genes, each of which play a unique functional role in our biology. Considering the various mutations that may be present across genetic loci as well as the interplay of these factors, it may quickly become an overwhelming topic to review. To support researchers looking for regular information on genetic targets of interest, we have developed our Weekly Gene series to introduce the development trend and future direction of research across human genes. Cyagen’s Weekly Gene series provides insights into popularly researched genes, their basic information, research overview, and application background of the gene in detail. This week’s subject is the CAV1 gene, which plays an important role in the development of idiopathic pulmonary fibrosis.

The CAV1 gene is responsible for encoding the Caveolin 1 (CAV1) protein, also called caveolin-1 (CAV-1), which belongs to the Caveolin family of integral membrane proteins. This family includes three proteins, namely Caveolin-1,  Caveolin- 2, and Caveolin-3. The caveolin 1 protein is composed of 178 amino acids and has two isoforms, CAV-1α and CAV-1β. In terms of gene location, the CAV1 gene is located on chromosome 7 in the human genome, corresponding to the 6E1 region of mouse chromosome. The relative molecular mass of CAV-1 protein is about 21000-24000 [1~3].

In addition, CAV-1 protein is a membrane signal protein with multiple functions. At present, CAV-1 has been found to be involved in a variety of signal transduction processes including G protein and tyrosine kinase. Recent research results indicate that CAV-1 can promote the production of extracellular matrix (ECM) by regulating the TGF-β signaling pathway, inhibit inflammation, and ultimately promote the occurrence of fibrosis.

Idiopathic pulmonary fibrosis (IPF) is a progressive pulmonary fibrosis disease of unknown cause, which is related to inflammatory damage. In clinical practice, the main symptoms are dyspnea, cough, and decreased lung function. Its pathogenesis is mainly related to the damage of alveolar epithelial cells, abnormal fibroblast deposition and abnormal lung repair. It is mainly manifested by pathological characteristics such as abnormal pulmonary interstitial hyperplasia, alveolar simplification, and alveolar wall thickening, which will cause the patient's lung capacity to shrink. Lung compliance is reduced, and the process of fibrosis is almost irreversible [4]. The survival rate of patients is poor, and they usually die 3-5 years after being diagnosed with idiopathic pulmonary fibrosis [5].

At present, many studies have reported that there is a close correlation between CAV-1 and IPF, especially given that the lack of CAV-1 plays a vital role in the occurrence of IPF, and the up-regulation of CAV-1 helps prevent the occurrence of IPF. Therefore, CAV-1 may become a potential therapeutic target for IPF in the future.

At present, the most classic and commonly used IPF model is the bleomycin-induced injury model. Bleomycin is an anti-tumor drug that has killing effects on a variety of tumors, and is often used to induce various fibrosis models [6]. In a mouse model of pulmonary fibrosis, bleomycin can effectively up-regulate the expression of various fibrosis-related genes, activate related pathways, and simulate the process of fibrosis.

There have been studies to detect changes in CAV-1 expression at different time points after bleomycin-induced lung injury in mice. The results showed that the model appeared fibrosis from the 7th day to the 10th day after the injury, and the fibrosis degree reached the peak around the 14th day after the injury. The study detected CAV-1 expression on day 5 (when inflammation is relatively more active), day 7 (when fibrosis progresses), day 12 (close to the peak of fibrosis), and day 28 (fibrosis regression stage) after injury. . The results showed that the CAV-1 protein expression in whole lung lysates was significantly reduced on the 5th, 7th and 12th day, and it recovered on the 28th day after lung injury [7]. In order to further explore the cell population from which the down-regulation of CAV-1 expression came, Lin et al. performed immunofluorescence specific staining on the markers of different cell populations in the alveoli. The results showed that in the mouse model of bleomycin-induced injury, the down-regulation of CAV-1 expression is mainly concentrated in alveolar type I epithelial cells [8]. 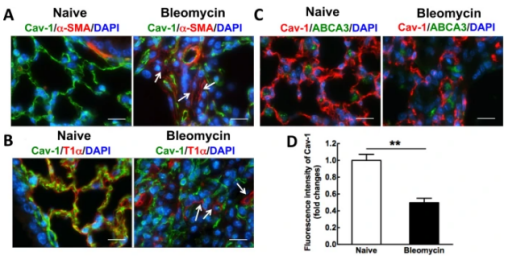 In fact, although the anti fibrosis effect of Cav-1 has been found in most studies, it is still reported that Cav-1-/- mice show a reduction in the degree of fibrosis after bleomycin induced injury [9]. Therefore, the relationship between Cav-1 and IPF is still uncertain. In addition, it has been reported that Cav-1 deficient mice exhibit endothelial cell proliferation not normally regulated, alveolar septal thickening caused by fibrosis and immune deficiency [10]. These studies indicate that the relationship between Cav-1 and IPF is close and complex.

The US Food and Drug Administration approved two drugs for IPF in 2014. However, the effect of the two drugs in reversing IPF is still not satisfactory. According to analysis, even in the United States, the use rate of the two drugs is extremely low. Therefore, there is still no effective intervention treatment for IPF, and the only treatment that is considered to be effective is lung transplantation. Therefore, IPF's disease treatment targets and potential drug development have always been research difficulties and hotspots in the scientific community.

The latest study found that transfection of CAV-1 overexpression plasmid into alveolar cells by electroporation can effectively reduce the degree of bleomycin-induced pulmonary fibrosis, and at the same time, the recruitment of neutrophils and macrophages caused by injury It will also be weakened [8]. This treatment method can accurately deliver the CAV-1 overexpression plasmid to the lungs through targeted transfection, avoiding surgical trauma and the impact on other tissues and organs. 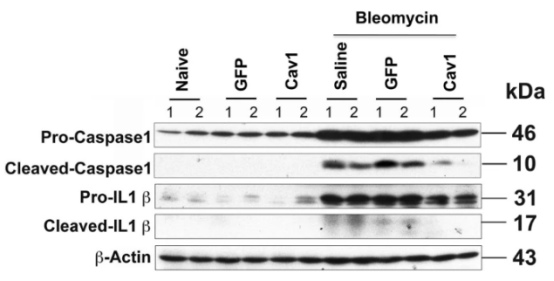 Accumulating evidence shows that CAV-1 plays an indispensable and key role in mouse or human idiopathic fibrosis. In particular, the upregulation of CAV-1 can inhibit the fibrosis process for the prevention and prevention of IPF in the future. The treatment provides a brand-new approach to diagnosis and treatment. There have even been research reports that CAV-1 derived peptide (Caveolin-1–derived peptide) has been shown to effectively inhibit bleomycin-induced pulmonary fibrosis in mice[11] , The results of this study undoubtedly push CAV-1 as a therapeutic target of IPF to a new height, and the treatment with CAV-1 as a target may be widely used in the near future.

[3]Woo-Kuen Lo, et al. Identification of caveolae and their signature proteins caveolin 1 and 2 in the lens[J]. Experimental Eye Research,2004,79(4)

For your easy understanding about the deadly lung disease idiopathic pulmonary fibrosis—cav1  in Korean, please refer to our Korean website https://korea.cyagen.com

For your easy understanding about the deadly lung disease idiopathic pulmonary fibrosis—cav1  in Japanese, please refer to our Japan website https://www.cyagen.jp