MECP2 has a major impact on learning and memory in mammals and is also a pathogenic gene for Rett syndrome and MECP2 duplication syndrome. It encodes the MeCP2 protein, which has significant effects on gene transcription through multiple mechanisms and likely plays a role in maintaining synaptic connections. Given that MECP2 has a clear phenotype of learning and memory animal model, it is an ideal target for the study of gene transcription in learning and memory. The main function of the MECP2 gene is transcriptional regulation. In humans and mice, the gene is located on the X chromosome and ultimately encodes a protein, MeCP2, consisting of about 500 amino acid residues. The MeCP2 protein binds to sites of DNA methylation, repressing transcription. Rett syndrome is caused by inactivating mutations in MECP2 and belongs to the group of X-chromosomal recessive disorders. Whereas MECP2 duplication syndrome results from an extra copy of MECP2 on the long (q) arm of the X chromosome and belongs to the group of X-chromosomal dominant disorders.

The MECP2 gene is located on the X chromosome, and its adjacent genes are the RCP and IRAK genes. In humans and mice, exons 1-4 and the three introns within them have been shown to have a significant effect on the function of the gene. The MeCP2 protein mainly consists of 5 parts. First, terminal sequence NTD (N-terminal domain) and CTD (C-terminal domain) located at both ends. In the middle, there are the methylation site binding domain, the intermediate domain, and the transcriptional inhibition domain. In theory, the protein is 53 kD, but its molecular weight is 75 kD in Western blotting due to a series of post-translational modifications. MeCP2 is somewhat expressed in most tissues, with highly expressed tissues including the brain, lung, and spleen. There is relatively low expression of MeCP2 in liver, heart, kidney and small intestine. Whereas in the mouse brain, MeCP2 expression is the highest in the olfactory bulb, striatum, cortex, hippocampus, thalamus, cerebellum, and brainstem. The main expression forms of MeCP2 are divided into two types, E1 and E2, depending on whether the first exon is translated or not.

MeCP2 regulates neuronal differentiation during early embryonic development, neuronal maturation & circuit formation, and promotes chromatin center clustering during differentiation and maturation. Thus, MeCP2 participates in the establishment of the chromatin structure of mature neurons (mature neurons are less concentrated in chromatin centers, as shown in black circles). In adulthood, MeCP2 is a key factor in the maintenance of neuronal function. It maintains chromatin structure and regulates the neuronal transcriptome. In addition, MeCP2 remains on standby for stimulus dependent gene transcription, which means stimulation can promote MeCP2 dissociation and lead to the transcription initiation of related genes, which regulates cognitive function. 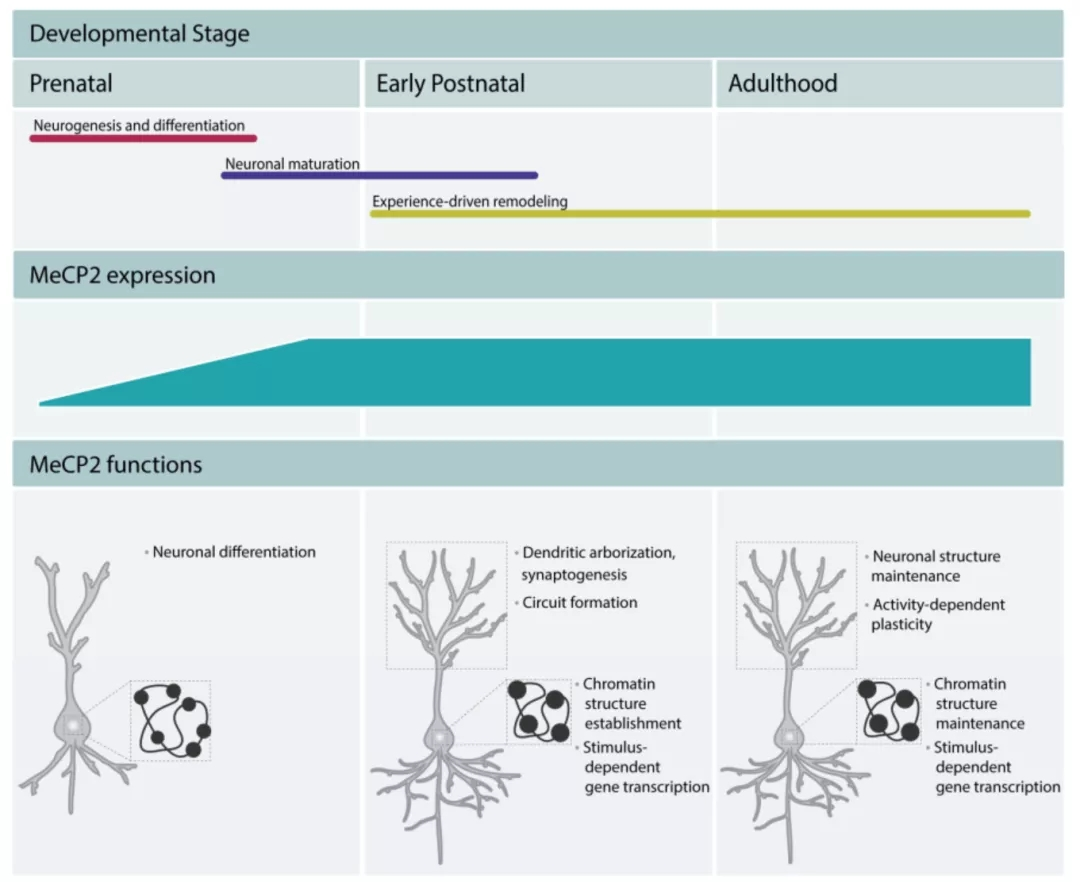 Gene therapy is undoubtedly an ideal treatment for Rett syndrome caused by mutated MeCP2, but many concerns remain. If the vector containing MECP2 is expressed in vivo by intravenous injection, the toxicity of virus vector must be considered, especially as the aggregation of toxicity in the liver can cause fatal effects. On the other hand, if we want to express MeCP2 in the central nervous system, circumvention of the blood brain barrier (BBB) is the biggest problem. Although direct intracranial injection and intrathecal injection, can bypass the blood brain barrier, the target should be neurons with abnormal expression of MeCP2, because the overexpression of MeCP2 in a single neuron is also unfavorable.

As the main pathogenic gene of Rett syndrome, the repression of MeCP2 at an early stage helps to partially alleviate its effect on intellectual development but is difficult to control it in time. On the other hand, loading viral vectors with MECP2 has obvious therapeutic effects on mouse models, but there is still a long way to go on applying this method to the treatment of Rett syndrome.