What are the Strategies for Gene Therapy?

Gene therapy refers to the introduction of exogenous (normal) genes into target cells to correct or compensate for the diseases caused by defects and abnormal genes, to achieve the purpose of disease treatment. At present, it has shown great potential in the treatment of cancer, genetic diseases such as thalassemia, sickle anemia, hemophilia, and congenital amaurosis.

Cancer and rare diseases are the two areas with the most current clinical research on gene therapy, considered a great potential cure. According to the Pharma project’s statistics in 2018, the current application areas of gene therapy mainly involve cancer, monogenic diseases, cardiovascular disease, infectious disease, and more.

This article brings together insights on the types of gene therapy and strategies used for current research applications.

What are the most common types of gene therapy?

At present, there are three common types of gene therapy:

(1) Immune regulation: The gene of antibody, antigen, or cytokine is introduced into the patient's body to change the immune state and achieve the purpose of prevention and treatment of diseases. For example, the gene of interleukin (IL) can be introduced into the body of tumor patients to improve the level of 1L to activate the anti-tumor activity of the immune system and to achieve the purpose of tumor treatment.

(3) Gene replacement (Supplemental): The defective gene still exists in this treatment method. It is the main method of gene therapy currently used in clinical studies. The target gene is transferred into the diseased cells or other cells, and the expressed products can strengthen or correct the function of the defective cells.

(4) Gene replacement (Complete): The normal gene is used to replace the pathogenic gene in situ, so that the DNA in the cell is completely restored to normal.

(5) Gene repair: Directly repair the abnormal part of the gene.

Gene augmentation (enhancement) therapy is used to treat diseases caused by loss-of-function mutations, which prevent the gene from producing a functional product. This gene therapy technique introduces DNA containing a functional version of the lost gene into the cell and aims to produce a functioning product at sufficient levels to replace the protein that was originally missing. At present, gene augmentation is mainly used to delivering of a new, functional protein-coding gene, increasing the expression of growth factors and cytokines, and genes related to autophagy activation (to accelerate the elimination of abnormal proteins).

Gene augmentation therapy is the most common treatment option for spinal muscular atrophy (SMA). SMA is caused by a deficiency of a motor neuron protein called SMN1, so the basic concept of gene therapy treatment is to insert the normal SMN1 gene into the diseased cell. Importantly, vector AAV9 can deliver cDNA of SMN1 gene to the cells. The first gene therapy treatment for SMA was approved by the Food and Drug Administration (FDA) in 2019. Despite being an effective option to minimize the progression of SMA and improve survival, this treatment is costly.

In cases where the addition of a functional gene does not resolve the disease phenotype, gene silencing therapy may be used to shut down (silence) the expression of an abnormal gene. For diseases caused by dominantly inherited disorders, just one abnormal allele can manifest the disease phenotype and related dysfunctionality of cells or organs. A common example is the constitutive expression of oncogene mutations in tumor cells, which requires gene therapy to inhibit the function and expression of pathogenic genes. RNA interference (RNAi) therapy has been applied in research across many polyglutamine (PolyQ)-related diseases, including Huntington’s disease (HD) and spinocerebellar ataxias (SCAs), with the aim to reduce the expression of toxic proteins. Although single-stranded ASOs can mediate gene silencing – small/short interfering RNA (siRNA), short hairpin RNA (shRNA), and microRNA (miRNA) therapies typically provide stronger inhibitory function and durability.

Suicide gene therapy is also known as virus-directed enzyme prodrug therapy (VDEPT); its principle is to transfer suicide genes into tumor cells in a targeted manner, using viruses as vectors. The specific enzymes encoded by this gene can metabolize the drug precursors which are not highly toxic to cells into toxic products in tumor cells, thereby preventing replication and causing these cells die. For example, thymidine kinase gene/ganciclovir system (TK/GCV) and cytidine deaminase/5-fluorocytosine system are based on this principle and are some of the most cited in lung cancer research.【1】 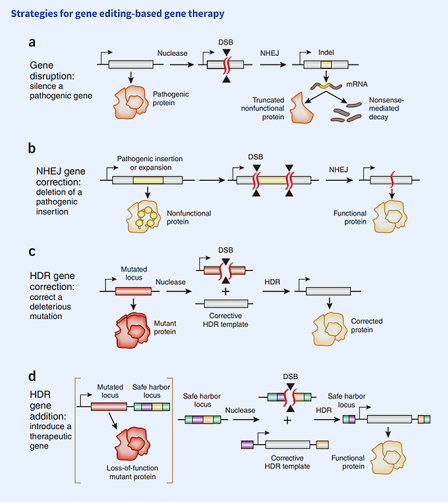 At present, gene editing is the most popular and promising technology in gene therapy. This technique utilizes gene-editing tools – such as transcription activator-like effector nucleases (TALENs), zinc finger nucleases (ZFNs), and CRISPR - are used to insert repair genes into cell DNA. The advantage of this technology is that it not only avoids the risk of random gene insertion but also ensures the continuity of therapeutic effect through repair or insertion.

In the next article, we will present a case study in gene therapy that leverages the gene-modified animal model and viral vectors and discuss the progress of gene therapy applications.

With the growing understanding of disease mechanisms and effective therapeutic targets as well as the development of gene-editing technology, large-scale clinical application of gene editing therapy have become possible, especially for those diseases that are difficult to be cured by traditional therapy - such as rare diseases, genetic diseases, and more.

>> The Use of Animal Models in Rare Disease Therapeutic Research

>> What is Gene Therapy? An Introduction to the Research

Cyagen provides comprehensive model generation services for all your research needs. Contact us to perform your entire project - from initial strategy design and experimental model construction, all the way through supporting services – we deliver research-ready models and professional services for guaranteed results.