How AI + Minigene Aids the Research of Aberrant Alternative Splicing

Alternative splicing is the regulatory process of selecting different combinations of splice sites within a messenger RNA precursor (pre-mRNA) to produce variably spliced mRNAs. These multiple mRNAs can encode proteins that vary in their sequence and activity and yet all arise from a single gene.

Regulation of alternative splicing involves many interacting components, and is influenced by the specific sequence (cis-acting elements) of the spliceosomal protein gene, and minor changes (such as single base mutations) can lead to aberrant alternative splicing which is associated with pathogenesis of various diseases, such as Duchenne Muscular Dystrophy (DMD) and Spinal Muscular Atrophy (SMA).

Herein, Cyagen would like to share how to verify the mutation sites that might be associated with alternative splicing during the process of clinical sample testing. Discover the fastest way to efficiently and accurately screen the possible pathogenic sites of alternative splicing before conducting a scientific verification.

1. Why would aberrant alternative splicing occur?

Alternative splicing results from the interaction of proteins that regulate splicing and cis-acting elements present at introns and exons. They include intronic splicing enhancer (ISE), intronic splicing silencers (ISE), exonic splicing enhancer (ESE), exonic splicing silencer (ESS), and Ag-exon-GT conserved sequences. The combination of cis-acting elements and the corresponding proteins regulates the accuracy and efficiency of exon splicing. Additionally, there tends to be spatiotemporal specificity in the expression of regulatory splicing proteins (i.e., there will be differences in the expression patterns of the same regulatory proteins at different developmental stages and tissue sites) which may contribute to generating different splicing types.

When the sequences of these cis-acting elements are mutated, namely point mutations, various aberrant splicings might occur. Common types of aberrant splicing include whole or partial exon deletions, whole or partial intron retention, multiple exon deletions, etc. The consequence of aberrant splicing is partial sequence deletion of exons, resulting in a protein missing long stretches of amino acids; this also occurs due to non-3-fold insertions or deletions, which will lead to frameshift mutations or premature generation of a stop signal and ultimately results in the absence of normal protein function.

2. How is alternative splicing validated?

Through sequencing, we have access to a large number of SNP mutation sites. Some sites were located in non-coding regions of genes (such as introns, promoters, intergenic spacers, etc.) and some were located close to intron and exon junctions, which could be selected for bioinformatics analysis, ultimately screening out possible mutation sites related to alternative splicing.

By combining conventional bioinformatics analysis and AI models, we can screen the loci of interest before heading onto validation experiments. The RDDC RNA Splicing Tool is based on deep neural network (DNN) strategy and bioinformatics that predict splicing by analyzing the splicing abnormalities that have a greater effect on protein coding translation, and eventually finds out the causes of genetic diseases at the base mutation level. When using the RNA Splicing tool, only the gene of interest, transcript ID, mutation site location, and mutation type are needed to obtain a prediction result.

Learn about the AI tool

The common method to verify hypotheses is to construct a point mutation cell line for cell phenotype analysis and cDNA detection. However, when the number of mutation sites is large, constructing point mutant cells would be time and money consuming. If we take advantage of the effective minigene system for verification, the success rate will improve greatly.

The Minigene splicing assay involves the cloning of exons and flanking introns containing the mutated or wild-type site into a vector in vitro, followed by transfection of the vector into cells and subsequent analysis of the splicing by RT-PCR and sequencing. The general mechanism is that the exogenous exon to be studied and the flanking introns can be loaded at the cloning site, with vector borne exons A and B present up- and downstream of the cloning site, respectively. And amplification primers for RT-PCR have been designed based on exon A and B sequences for subsequent detection. The constructed vector was transfected into cells, and the wild-type group would express mRNA containing exon A + exogenous exon + exon B. The genotype is confirmed by RT-PCR and sequencing. If the mutation group could produce aberrant alternative splicing, mRNAs inconsistent with the wild type were expressed. 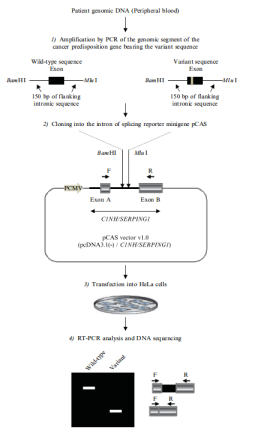 Figure 1. Use of Splicing Reporter Minigene Assay to Evaluate the Effect on Splicing

●The Applications of Minigene

Minigene has been widely used in the study of aberrant splicing. Some genetic studies, which included familial analysis and sequencing (Fig. 2), have revealed that EYS has mutation sites which may be related to inherited retinal degeneration. Through bioinformatic analysis, there were two mutation sites that may affect alternative splicing: c.3877 + 1g > A and c.2992_ 2992+6delinsTG.

Next, researchers used the minigene system to verify the prediction results: the first site c.3877 + 1g > A, loaded intron 24, exon 25 and intron 25 into pspl3 vector, transfected ARPE-19 cell line, and found that this site can produce abnormal alternative splicing by RT-PCR amplification and sequencing (Fig. 3).

Another site was also verified by the same method: intron 18, exon 19, and intron 19 were loaded into pSPL3 vector and transfected into HEK293T and ARPE-19 cell lines, respectively. RT-PCR amplification and sequencing revealed that this site can produce abnormal alternative splicing(Fig. 3).

Figure 2. EYS variants that might be related to Retinitis Pigmentosa 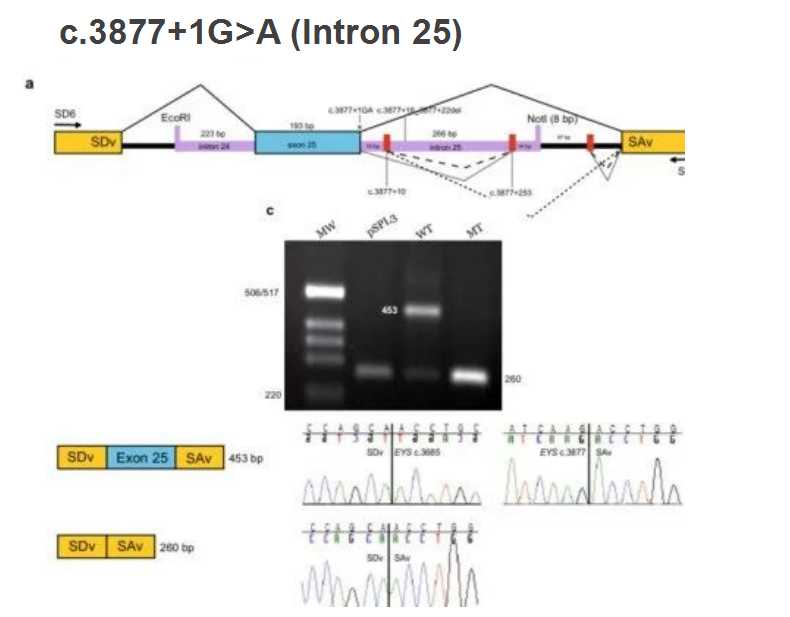 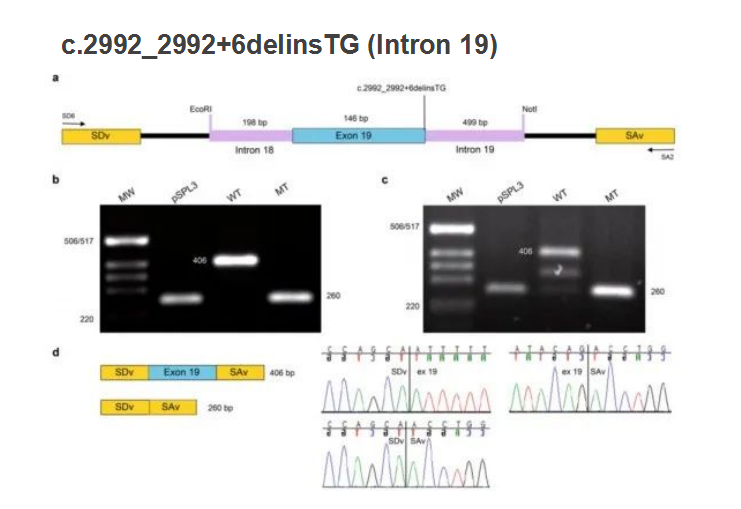 Aberrant mRNA splicing is closely related to the pathogenesis of various diseases. To support the development of related drugs, it is necessary to dig deep into its mechanisms, particularly, the way to efficiently and accurately screen the possible pathogenic sites and conduct an effective scientific verification.

Cyagen has a robust bioinformatics database, which can perform analysis across the whole genome for human genes and genetic disorders, animal models, and cell line models. By combining all available data with our expertise in machine learning and deep neural networks (DNNs), we aim to use artificial intelligence (AI) to guide model selection and design into the new era.

More importantly, with point mutation cell models and mouse models, the aberrant splicing mechanism of mutation sites can be confirmed in the lab, which is beneficial to develop ASO therapeutic drugs. In this process, the minigene system can also be used to efficiently screen ASO drugs with therapeutic effects.