Beyond Mediating Host Cell Entry of SARS-CoV-2: What Roles Does ACE2 Play?

After the emergence of the novel coronavirus, SARS-CoV-2, a war against the resulting disease, COVID-19, and its sequelae – severe respiratory illness and pneumonia - has been rapidly and extensively introduced in China. In our fight against the virus and COVID-19, researchers have studied the SARS-CoV-2 virus itself and its host receptor, ACE2, from the aspects of epidemiology, pathology, virus traceability, prevention, and control measures. The human ACE2 receptor is known to interact with SARS-CoV-2 and permit its initial cell entry, making it particularly important to explore its function. What roles does ACE2 play in addition to helping SARS-CoV-2 enter the host cell? Herein, the significance of ACE2 across various human systems and pathologies will be explained.

Angiotensin-converting enzyme (ACE) is a kind of metalloproteinase encoding 805 amino acids, located in X chromosome (Xp22.2). ACE is a type I transmembrane glycoprotein with a single extracellular catalytic domain that plays an important regulatory role in the renin-angiotensin system (RAS). It can convert inactive angiotensin I (a.k.a. proangiotensin) into angiotensin II (a.k.a. AII, Ang II), which regulates vasoconstriction. As the core effector molecule of RAS system, Ang II mediates many biological reactions through angiotensin receptors (AT1 and AT2). ACE2, a homolog of ACE, can split Ang II into Ang (1-7) polypeptide, which has anti-inflammatory functions: protecting cardiomyocytes, relaxing blood vessels, anti-proliferation, and can enhance the activity of bradykinin (an inflammatory mediator). 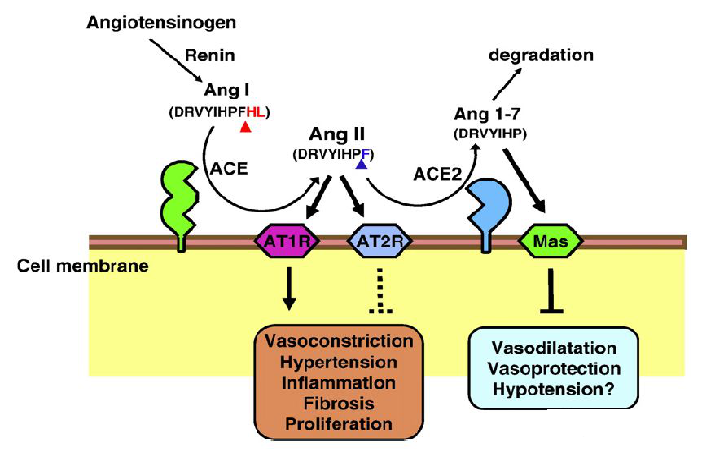 In 2000, researchers cloned ACE2 from the human cDNA library of heart failure and lymphoid cancer patients. From then on, the research of ACE2's function has spread all over the world.

2. ACE2 and the Novel Coronavirus

ACE2 is the functional receptor of the SARS virus. Research has showed that when SARS coronavirus invade cells via cell surfaces expressing ACE2, its infection efficacy increased by 10 times. The external receptor-binding domain (RBD) of SARS virus combines with N-terminal of receptor, forming a hydrophilic contact network which plays a leading role in RBD/ACE2 interaction. After binding with ACE2, the fusion between SARS-CoV envelope and host cell membrane is completed by spike (S) glycoprotein S2 subunit. Two kinds of protease need to be mentioned here, one is ADAM17 metalloproteinase, the other is serine transmembrane protease TMPRSS2. At present, it has been reported that these two enzymes play a role when the coronavirus enters the host cell and binds with ACE2. Keiji Kuba et al. found in 2010 that ACE2 can enter host cells in a Clathrin-dependent mode after binding with SARS virus. At the same time, ACE2 will be cut by ADAM17 metalloproteinase, which hinders the binding of virus and ACE2. Similarly, Markus Hoffmann et al. put forward such a view on Cell Press as recently as March 2020. When SARS-CoV-2 enters into the host cell, TMPRSS2 transmembrane protease is required to assist with the combination of ACE2 and SARS-CoV-2. While findings indicate that the ACE2 receptor is the main factor to mediate coronavirus entry into the host cells, it is not the only factor to play a role in the process. Given that both TMPRSS2 and ADAM17 proteases compete to cleave ACE2, while only TMPRSS2-mediated cleavage of ACE2 resulted in augmented SARS-CoV-2 membrane fusion - researching the role of these transmembrane proteins is also meaningful. In the development of targeted drugs, we need to explore genes across all levels of pathology if we want to minimize the damage to the body and have an optimal effect on the prognosis. On the other hand, SARS-CoV-2 is rampant among human beings, with the resulting COVID-19 mainly causing damage to the lungs, which is closely related to the distribution of ACE2 in the pulmonary tissues. Therefore, ACE2 can be regarded as the primary gene of interest for SARS-induced respiratory illness alongside its use in researching lung diseases such as pulmonary fibrosis, pulmonary inflammation, and even lung cancer.

Early gene expression studies showed that ACE2 was only expressed in the heart, kidney, and testes - but subsequent studies have shown that it also exists in the lungs, liver, brain, pancreas, and colon. ACE2 protein can hydrolyze Ang II to form Ang 1-7. In the kidney, Ang 1-7 acts on the G protein-coupled receptor (GPCR) MAS, leading to vasodilation, anti-fibrosis, anti-proliferation and anti-inflammatory vascular protection.

Kidney injury is largely mediated by Ang II. Some studies have shown that ACE2 gene knockout can lead to an increase in blood pressure, glomerular damage, and renal fibrosis in diabetic mice. Exogenous human recombinant ACE2 (hACE2) can slow down the progress of diabetic nephropathy (DKD) by reducing albumin excretion. ACE2 was highly expressed in kidney, mainly in brush border cells of proximal renal tubules, endothelial cells, smooth muscle cells of renal vessels, and podocytes. It has been reported that in damaged renal tubules, the increase of Ang II may be a possible mediator for further renal damage in human renal diseases. Therefore, the imbalance between ACE and ACE2 in the kidney followed by high level of Ang II may lead to renal damage. Hypertensive nephropathy is a common complication of hypertension, with its main mechanisms being inflammation associated with Ang II, oxidative stress, and renal fibrosis. It is worth noting that in April 2019, the school of medicine of Jilin University found that Ginsenoside Rg3 can alleviate the Ang II-mediated renal injury in rats and mice by upregulating ACE2 in renal tissue. In addition to anti-tumor activity, Rg3 can also protect the cardiovascular system through various mechanisms, including anti-inflammatory, anti-oxidative stress, and anti-fibrosis.

ACE2 is widely expressed in cardiomyocytes, cardiac fibroblasts, and coronary artery endothelial cells. ACE2 is an important regulatory protein in RAS, the system which regulates the balance of body fluid and blood pressure and maintains the tension of blood vessels. The overactivation (increase of vasoconstriction) or depletion (decrease of vasodilation) of RAS will lead to vascular dysfunction, which is the main cause of atherosclerosis and cardiovascular disease (CVD). One way to repair vascular dysfunction and other pathological diseases is to increase the activity of ACE2 by balancing the role of Ang II. Craceower et al. explained the importance of ACE2 in heart function; they found that ACE2 knockout (KO) mice have severe cardiac dysfunction, and ACE2 may have the potential to remodel and regulate heart function. Researchers found that local overexpression of ACE2 significantly inhibited the development of early atherosclerosis - this anti-atherosclerotic effect was related to the inhibition of proliferation and migration of vascular smooth muscle cells, and the improvement of endothelial function.

Further studies have confirmed that the activity of ACE2 is increased in the plasma of patients with left ventricular systolic dysfunction (LVSD). LVSD is an important risk factor for coronary heart disease, sudden death, heart failure, and stroke. Furthermore, Uri et al. confirmed the correlation between the activity of ACE2 in serum and the worsening of heart failure. Specifically, in the development from hypertension to heart failure, the decrease of serum ACE2 activity is a selective biomarker of cardiac systolic dysfunction. Vaibhav B. Patel et al. also confirmed that the ACE/Ang1-7 axis plays an important role in the activation of RAS system. The absence of ACE2 will enhance the sensitivity to heart failure, but increasing the level of ACE2 can prevent and reverse the phenotype of heart failure.

Together, RAS and natriuretic peptide system (NPS) are the main culprits of the occurrence and development of diabetic cardiomyopathy (DCM). Neutral lysozyme inhibitors can protect the cardiovascular system through increasing NPS levels via the increase of RAS blockers (include angiotensin blockers, ARB, and ACE inhibitors). The activation of the ACE/Ang II/AT1 receptor pathway is related to processes like inflammation, oxidative stress, fibrosis, and insulin resistance.

Studies have shown that the expression and activation of ACE2 are necessary to maintain the balance of endothelial function. Diminazene Aceturate (DIZE) is an activator of ACE2. Oral administration of DIZE to diabetic mice can promote the overexpression of ACE2 and improve the vascular function. The researchers found that after DIZE administration, the level of Ang (1-7) in the plasma of diabetic mice was increased, enhancing the production of nitric oxide (NO) - released from arterial endothelial cells to aortic smooth muscle cells - so as to change the function of blood vessels.

ACE2 is mainly expressed in the gastrointestinal tract, heart, kidney, lung, and testis, but there is a lower level of ACE2 expression also found in the brain. In neurobiochemistry, transgenic and knockout (KO) animal models are used to study neurohormonal systems, such as RAS, and explain the effects of changing individual components of each system on the whole physiological process. 5-hydroxytryptamine (serotonin) plays a role as a neurotransmitter in the brain. Since tryptophan is a precursor for 5-hydroxytryptamine synthesis, deficient tryptophan intake will lead to the decreased synthesis of 5-hydroxytryptamine and result in decreased serotonin levels in the blood and brain. Serotonin is essential for motor-induced hippocampal neurogenesis. Additional research has found that ACE2 deficient mice eliminated the proliferation of motor-induced hippocampal dentate gyrus cells, but when 5-hydroxytryptamine in the brain was replaced by oral glycosyl-1-tryptophan, motor-induced neurogenesis could still not be recovered. It has been found that in transgenic mouse models, both the overexpression or knockout/knock down of ACE2 in the whole brain or hypothalamus are helpful to reveal the main functions of ACE2 in the central nervous system (CNS). Collective observations show that ACE2 plays an obvious regulatory role in blood, heart, stress response, anxiety, cognition, brain injury, and neurogenesis. Therefore, the activation of ACE2 has become a treatment target for a variety of nervous systems diseases.

Hypertension and cerebrovascular dysfunction in middle age are associated with an increased risk of Alzheimer's disease (AD). In AD preclinical models, the enhancement of ACE2 can prevent and reverse the pathological changes of hippocampus and cognitive impairment related to amyloid protein. In the AD model of Tg2576 mice, activation of ACE2 can prevent cognitive decline and weaken the pathological phenomenon of amyloid protein. Studies have shown that DIZE can reverse memory and cognition related disorders and reduce amyloid beta (Aβ) pathology in Tg2576 aged mice. Other results have shown that in the experimental animal model of CNS injury, the ACE-induced activity of the RAS related (RRAS) pathway decreased, and the induction of the ACE2/Ang-(1-7)/MAS axis had neuroprotective effect on ischemic stroke and neural hypertension. The improvement of ACE2 mediated memory and cognition function is related to the reduction of the inflammation-related cytokine, interleukin 1 beta (IL-1β), rather than the associated astrocytes, microglial cells and vascular functions. Taking into account both the tissue expression patterns and the results of the previously-described studies, we know that ACE2 is widely distributed in the human body. As an important regulatory molecule in RAS system, ACE2 is expressed in the oral mucosa epithelium and participates in the development of oral squamous cell carcinoma, the process of chronic biliary fibrosis, and thyroid cancer. This series of studies shows that ACE2 has various powerful functions - by studying various disease models, we can more deeply understand the function of ACE2. We know that the application of animal models has accelerated the development of modern biomedical science. To verify the function of gene, we need to use gene knockout/knock-in models, such as the dual-purpose KO-First model. For drug development and functional verification of new drugs, we can use humanized animal models. In terms of vaccine evaluations, model animals are also used for further validation before clinical applications and human trials. Transgenic animal models can simulate the occurrence and development of diseases in the human body to the greatest extent – providing the  closest replication of the pathological phenomena and pathogenesis of various diseases. Animal models play an important role in various aspects of research, from basic discovery all the way through drug development and vaccine evaluation.

Cyagen is prioritizing production of ACE2 humanized mice to support research on COVID-19, the disease caused by SARS-CoV-2 virus.

Learn more information about how to lock-in your desired models >>