Rare Diseases Are Not Uncommon

Age and heredity are currently recognized as the most relevant causative factors for amyotrophic lateral sclerosis (ALS), although age is also the biggest risk factor for many other neurodegenerative diseases. While inherited ALS accounts for only 5% of patients, there are more than 20 gene mutations identified as the pathological culprits of ALS.

As early as 1993, superoxide dismutase 1 (SOD1) was found to be closely related to ALS, and about 20% of inherited ALS cases are related to it. The normal SOD1 protein converts the active peroxides produced by cells into hydrogen peroxide and oxygen. However, the mutated SOD1 protein cannot complete this process, resulting in oxidative damage to neurons and functional neuromuscular damage.

TDP-43 and tau in Alzheimer's disease (AD), α-syn in Parkinson's disease (PD), and htt in Huntington's disease (HD) are also known as the "The Four Villains". The full name of TARDBP is transactive response DNA-binding protein 4, which accounts for a small proportion of inherited ALS (familial <5% and sporadic <1%). However, as many as 97% of patients have been found with TDP-43 aggregated endosomes in the motor cortex and spinal cord but these patients do not have TARDBP mutations. How to explain it?

The mutant SOD1 protein aggregates in cells to form endosomes, but it is not SOD1 protein that aggregates the most in ALS, but "someone else". Due to its early discovery, SOD1-related research is the most abundant in ASL. With the in-depth study of ALS, other pathogenic mechanisms of SOD1 have been gradually explored, including axonal transport, spinal capillary hemorrhage, induction of inflammation, and destruction of myelin.

TDP-43 is usually mainly involved in mRNA-related work, such as transcriptional regulation, as well as mRNA splicing, transport, or metabolism. However, in ALS research, it was found that TDP-43, which should be working in the nucleus, flooded into the cytoplasm resulting in insufficient "labor" in the nucleus, and mRNAs regulated by TDP-43 could not be processed into finished products, while TDP-43 accumulated in the cytoplasm began to abnormally activate to form endosomes, which endanger the normal activity of neurons.

Figure 1. The discovery of TDP-43 deposition and genes related to ALS[1]

In 2009, fused in sarcoma (FUS) protein and another endosomal transport fusion protein FIG4 were found to be related to ALS. FUS, an RNA-binding protein, is mutated in 4% and 1% of familial and sporadic ALS, respectively. The research on this protein started in the field of liposarcoma, and its effect is somewhat similar to that of TDP-43. Mutated FUS proteins aggregate to form endosomes, killing neurons.

In 2011, the real protagonist among the newly discovered genes was found to be C9ORF72. In the intron of the C9ORF72 fragment, there is a GGGGCC sequence with 400-2000 repetitions, while the normal repetition of this fragment is less than 10 times. This variant accounts for 36.7% and 6.3% of familial ALS and sporadic ALS, respectively, and 25% of familial frontotemporal dementia (FTD), so inherited ALS often has symptoms of FTD. In medullary ALS, the proportion of C9ORF72-related patients is as high as 44%. From the naming of this gene, it can be seen that the pathogenic mechanism is not yet clear, and there are a few reports that it is involved in autophagy and endosome transport. Most of the cases related to this gene are in Europe and America, and it is quite rare in most of Asia.


Since then, nearly 10 ALS-related genes have been discovered successively, and will not be introduced in detail here beyond the figure below, which shows the details of all ALS-related genes. The ALS models established by gene editing or transgenic technology are more reliable than chemical induction models, so many ALS transgenic mice have been developed. Since most ALS-related genes are inherited in an autosomal dominant manner, so making transgenic mice symptomatic is not difficult.

Of course, there are very few exon mutations in this gene, and the cause of the disease is the duplication of segments in the intron, so it is generally knocked in by BAC. This gene was discovered late, but it has been studied a lot due to its high association with ALS.

Based on current experimental results, scientists have proposed three hypotheses about C9ORF72:

❖ Over-repeated fragments cause the loss of this protein’s function;

❖ Toxicity from the sense and antisense RNAs transcribed by these repeats;

❖ Toxicity caused by the dipeptide repeat protein encoded by these six bases.

For the animal models constructed with different technologies, the neuronal death and movement disorders caused by overexpression are more obvious, which can be used to simulate the disease in the middle and late stages (represented by green arrows in Figure 3). On the contrary, knock-in has little effect on mice phenotype, which can be used to simulate early-to-mid-stage disease. 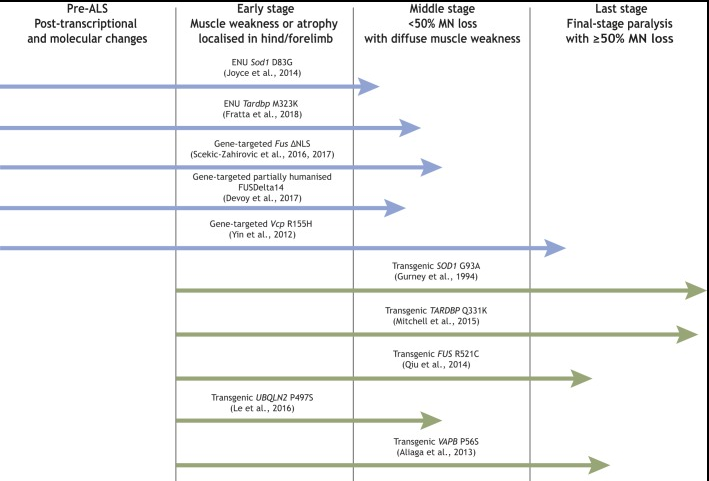 The knockout (KO) mouse model is an important tool to study the functions of these genes and the underlying mechanisms of ALS. In these genes, TDP-43 homozygous KO mice were non-reproductive, as their heterozygotes showed some protective effect on motor neurons; while SOD1 knockout mice developed severe peripheral nerve disease.

Gene knock-in (KI) mice are mice that have been knocked in with mutated mouse genes, and only one or two base mutations in the original genes of the mice can show very consistent pathological characteristics of ALS. For example, in VCPR155H mice, 50% of motor neurons die in old age and TDP-43 endosomes are generated in the cytoplasm. All in all, the KI mouse model showed a lesser reduction in motor ability.

Humanized mouse models have become a hotspot with the development of gene editing technology in recent years. Genetic humanization involves the replacement of the original mouse genes with the corresponding human genes in the same position. For example, humanized FUSδ14 mice will disturb the localization of FUS in mouse cells, resulting in the death of motor neurons.