In 2013, an activity involving the pouring of a bucket of ice water over a person's head went viral on American social media. The activity requires participants to either film videos of themselves having ice water dumped on them or donate a certain amount to fund cancer research.

Then the event was named "The Ice Bucket Challenge" by NBC, but it failed to attract much attention at that time.

By the summer of 2014, some American sports stars reintroduced that same concept but had the event related to Amyotrophic Lateral Sclerosis (ALS). There was another rule added to the activity: the person who completed the challenge could nominate another three people to continue the challenge, so the movement went viral immediately.

More and more celebrities actively or passively participate in the ice bucket challenge. The nominees either accept the challenge within 24 hours or choose to donate to fight ALS. The active U.S. President at the time, Barack Obama, was quickly nominated and chose to donate. Most celebrities were happy to do both, such as Justin Bieber, LeBron James, George Bush, Bill Gates, Tim Cook, Elon musk, Kobe Bryant, Ronaldo, Neymar, Hamasaki, etc.

he Ice Bucket Challenge also served to spread awareness about ALS, as the numbness and weakness of being poured with ice water is what ALS patients are experiencing all of the time. According to data, the event raised more than $115 million in 2014. Not only did it achieve the goal of raising funds, but also promoted awareness of the disease.

So, what is ALS, which has garnered so much attention from the Ice Bucket Challenge?

Amyotrophic lateral sclerosis (ALS), also known as motor neuron disease (MND), is a neurodegenerative disease that results in the progressive loss of motor neurons that control voluntary muscles. ALS is different from Parkinson's disease. The neurons affected by Parkinson's disease are dopamine neurons in the brain, which will not directly cause muscle atrophy. The average life expectancy after diagnosis with ALS is two to five years. During the 2-4 year period after patient diagnosis with ALS, the disease worsens rapidly and the symptoms are very obvious. 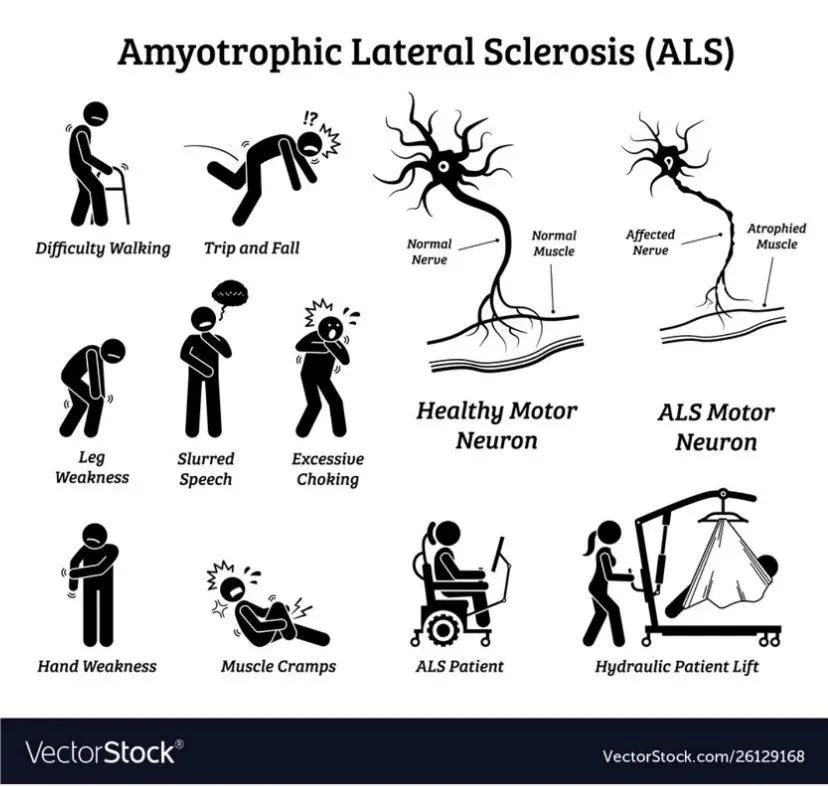 ❖ Early symptoms vary but can include: tripping, dropping things, abnormal fatigue of the arms and/or legs, slurred speech, muscle cramps and twitches, uncontrollable periods of laughing or crying, and difficulty chewing or swallowing

❖ In the middle and late stage, some individuals with ALS may develop painful neuropathy, and some will have cognitive or behavioral disorders.

❖ For many people, the muscles of the eyes, bladder/bowels, intestinal function are generally not affected.

Famous People Who Have or Have Had ALS

Stephen Hawking, a famed physicist, was diagnosed with ALS in 1963 and died in 2018 at the age of 76. Being confined to a wheelchair for 55 years, his grit and tenacity inspired people all over the world. 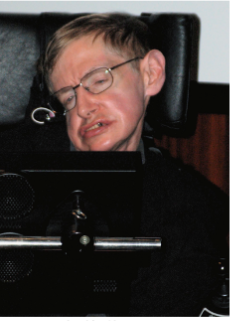 He was only 21 when he was diagnosed, which was undoubtedly a blow to the young Hawking. However, he did not allow the disease to stop him from pursuing his dreams. Not only did he write popular works such as A Brief History of Time and The Universe in a Nutshell, but he also made great achievements in the study of quantum cosmology and black holes.

Hawking had no cognitive impairments from ALS, so he was able to continue benefitting mankind after his diagnosis.

Another ALS patient who died in 2018 was Stephen Hillenburg. His name may not be familiar to many people, but his work animating SpongeBob SquarePants is popular all over the world. Hillenburg was a multitalented marine biologist educator, animator, writer, producer, director, and a successful businessman. 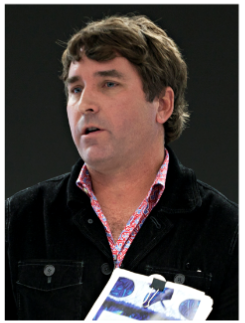 He was diagnosed at the age of 56 in 2017 and continued to work on SpongeBob for as long as he was able, until his death a year later.

In 1824, British doctor Charles Bell described in detail a disease that caused muscle atrophy and led to the death of patients, but it was not accurately defined. However, from the symptoms recorded at that time, it can be determined to have been ALS.

The connection between the symptoms and the underlying neurological problems were first described 45 years later by Jean-Martin Charcot, who initially introduced the term amyotrophic lateral sclerosis in his 1874 paper.

Although the disease is fatal and the symptoms are very serious, the low overall incidence rate led to society being largely unfamiliar with the disease, except for the patients and their families. 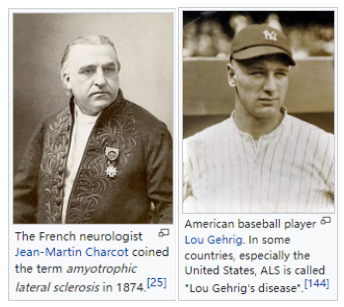 Lou Gehrig was an American professional baseball first baseman for the New York Yankees, nicknamed "The Iron Horse". In 1939, Gehrig delivered a farewell speech and left the stadium where he had created countless records.

Lou had been diagnosed with ALS just a few weeks prior to his farewell, but he had felt the decline of muscle strength six years before his retirement, and his condition worsened year by year. He had to retire when he couldn't persist at all. He passed away in 1941 at the age of 39. The flag in New York City flew at half-mast after his death and Gehrig's life was made into a film The Pride of the Yankees the following year. Not only were his baseball accomplishments being remembered by American people, but also the disease that eventually led to his early retirement. ALS is now commonly referred to in North America as "Lou Gehrig's disease".

The Rare Disease Data Center (RDDC) was developed by the Research Institute of Tsinghua, Pearl River Delta (RITPRD) with assistance from Cyagen Biosciences.

The RDDC database has collected and sorted out all information about rare diseases from international public biological resources, including related genes, mutations, phenotypes, and animal models of rare diseases, aiming to present themwith added visualization capabilities. At present, the RDDC has collected information on over 20,000 genes and 14,000 human diseases!

Users are not only able to better understand the information of corresponding rare diseases, but also can take advantage of various AI tools to predict pathogenicity and RNA splicing patterns, so as to help speed up the research and development of treatments for rare diseases.

*Statement: RDDC data and tools are only for scientific research reference, and should not be used as the final conclusion in medical diagnosis and evaluation.