While chronic pancreatitis (CP) is a relatively common disease, it remains difficult to treat. This is defined as a continuous or recurrent inflammatory pancreatic disease characterized by progressive and irreversible changes in pancreatic morphology. So far, scholars around the globe have done a lot of research on the diagnosis, treatment, and pathogenesis of the disease.

According to previous studies, mutations in genes encoding digestive proteases or their inhibitors often promote the development of acute pancreatitis and gradually develops into chronic pancreatitis (CP). For example, the pathogenic mutations of PRSS1 (cationic trypsinogen), CTRC (chymotrypsin C), and SPINK1 (serine peptidase inhibitor Kazal type 1) either stimulate the spontaneous activation or interfere with the protective mechanisms, thereby promoting the conversion of trypsinogen into harmful trypsin. In addition, hereditary CP can also be mediated by mechanisms unrelated to trypsin activity. For example, some PRSS1 mutations have no effect on trypsin activity, but instead cause the misfolding of enzymes and trigger endoplasmic reticulum (ER) stress. Similarly, CPA1 (carboxypeptidase A1) mutations cause the misfolding of enzymes in vitro, resulting in retention and degradation of CPA1 cells as well as ER stress.

Although trypsin activation or persistence has an important role in initiating the pancreatitis cascade, other factors like misfolding enzymes and endoplasmic reticulum (ER) stress may be contributing factors to recurrent inflammatory events which result in CP. There is an urgent need to develop reliable, validated animal models which can define the pathological mechanisms of CP and facilitate the evaluation of new therapy in preclinical trials. Now, we introduce three of the most recently-reported animal models of chronic pancreatitis to provide some references for your research!

Mutations in the SPINK1 gene is an critical pathogenic factor in developing chronic pancreatitis. The SPINK1 c.194+2T>C mutation is the most frequently observed variant in Chinese patients with idiopathic CP. To date, the only in vivo study focused on phenotype of homozygous Spink1 (also known as Spink3) deletion mice and found that they died of autophagic acinar cell death within 15 days after birth. Considering over 80% of Chinese CP patients with SPINK1 c.194+2T>C variant carry a heterozygous mutation, the following mouse models were created to reflect this population characteristic. Spink1 c.194+2T>C mutation was introduced through CRISPR/Cas genome editing, wherein Spink1 c.194+2T>C mutant mice were generated (referred to as Spink1−/− or Spink1+/− mice). Consistent with previous findings, Spink1−/− mice died soon after birth. Both Spink1+/+ and Spink1+/− mice treated with cerulein showed acinar atrophy and inflammatory cell infiltration at 9 weeks (see Figure 1). Notably, Spink1+/− mice treated with cerulein at 9 weeks developed symptoms similar to CP. In addition, Spink1+/- mice developed pathological changes under natural conditions, including pancreatic fibrosis and stellate cell activation at 13 weeks. These Spink1+/- mice demonstrated the pathogenicity of heterozygous SPINK1 c.194+2T>C mutant in vivo and found for the first time that this mutation directly leaded to CP without any co-factors. 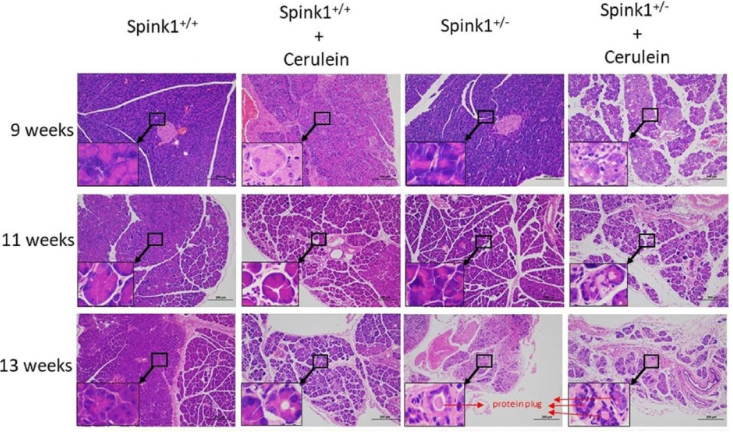 The lower left corner of each picture shows typical changes, and the closed arrow shows the formation of protein plugs.1

Researchers found four types of trypsinogen were highly expressed in mouse tissues, including T7, T8, T9, and T209 isoforms. Among them, T7 constitutes approximately 40-50% of total trypsinogen. To create a mutant T7 that would robustly increase autoactivation, researchers made the T7D23A knockin mouse by introducing an Ala mutation in place of Asp23 (p.D23A) in the activation peptide. Macroscopic pancreas morphology in T7D23A mice was normal at the age of 2-3 weeks, but more than half of the mice had significant changes in their pancreases at 4-5 weeks. These changes specifically manifested as pancreatic duct dilatation and diffuse interstitial fibrosis, which were accompanied by inflammatory cell infiltration (ICI) and central lobular necrosis - similar to the symptoms of chronic pancreatitis (see Figure 2).

Amylase is the most commonly-used indicator for the diagnosis of acute pancreatitis. Researchers measured the amylase activity in the plasma of T7D23A mice of various ages, which collectively indicated that trypsin activation persists throughout the disease course. To exclude possible alternative disease mechanisms unrelated to spontaneous activation of trypsinogen, researchers generated a mouse strain with a heterozygous T7D23A trypsinogen allele in which the trypsinogen activation site Lys24 was also mutated (p.D23A,K24G double mutant). The T7D23A,K24G mice showed no spontaneous pancreas pathology at 5.5 months – this observation offers compelling evidence that pathological mechanisms such as trypsinogen misfolding are not responsible for the phenotype associated with the T7D23A allele.

Lastly, researchers compared features of T7D23A mice to human pancreatitis. This new model recapitulates the clinical disease continuum of human pancreatitis in how it develops acute pancreatitis, which progresses to irreversible chronic pancreatitis. In summary, researchers present the first preclinical mouse model of chronic pancreatitis driven by increased intrapancreatic trypsinogen autoactivation. This model recapitulates many of the salient features of human chronic pancreatitis associated with genetic mutations, including atrophy, widespread ductal changes, regenerative signs (e.g. pseudotubular complexes), and some fibrosis. Despite the extensive pancreatic pathology presented by T7D23A mice, the strain breeds well and develops normally into adulthood - an essential trait for their preclinical utility.

PRSS1 mutations have no impact on trypsin activity, but lead to enzyme misfolding and endoplasmic reticulum (ER) stress in cell culture experiments. Similarly, CPA1 (carboxypeptidase A1) mutations cause enzyme misfolding in vitro, resulting in diminished CPA1 secretion, intracellular retention and degradation, and associated ER stress. Researchers knocked-in the most frequent human CPA1 mutation (p.N256K) into the mouse Cpa1 locus to make the CPA1 N256K mutant mice. Both C57BL/6 and CPA1 null mouse strains served as controls to distinguish between loss of CPA1 protein activity or CPA1 misfolding. The results show that CPA1 N256K mice can develop and reproduce normally, but it was observed smaller pancreata starting from 3 months of age and some typical hallmarks of chronic pancreatitis like progressive acinar cell atrophy, inflammatory cell infiltration, fibrosis, and more. The control strains exhibited no signs of pancreatic disease.

Finally, to determine whether the histological changes in the CPA1 N256K strain are associated with elevated ER stress markers, researchers measured pancreatic mRNA expression for the chaperone Hspa5 (BiP) and the transcription factor Ddit3 (CHOP) at 1 month, 3 months, and 12 months of age. These observations clearly establish that the p.N256K mutation in mice exhibited the expected CPA1 misfolding phenotype: diminished secretion, intracellular retention and degradation. By extension, the induced misfolding of CPA1 variants can directly cause marked upregulation of the pro-apoptotic transcription factor CHOP, resulting in CHOP-dependent acinar cell loss. Given that no such changes were observed in the CPA1 null strain, the results also demonstrate that loss of CPA1 function is not harmful to the pancreas.

In conclusion, this is the first mouse model that recapitulates features of digestive enzyme misfolding and associated endoplasmic reticulum (ER) stress, which makes it an ideal model to test the effects of various environmental insults (alcohol, smoking, high-fat diet) or pharmaceuticals on the progression of chronic pancreatitis.

The above three types of animal models in chronic pancreatitis: Spink1 c.194+2T>C mutant mice, T7D23A knock-in mouse, and CPA1 N256K mutant mice were all constructed by Cyagen. Undoubtedly, the emergence of these animal models facilitated the research and therapy of pancreatitis. From the associated literature, we found that it is feasible to combine in vitro and in vivo assays by using animal models to expedite research progress.

Cyagen Knockout Catalog Models provides over 10,000 strains of knockout (KO) mouse models in as fast as 3 months, starting from $9,999. All you have to do is to search the strains you need and submit your inquiry directly to us!

As the world's leading provider of custom mouse and rat models, we have successfully delivered over 50,000 custom animal models to researchers across the globe. With the introduction of Cyagen Knockout Catalog Models, we continue to expand our services in order to provide the most comprehensive offerings for both research institutions and pharmaceutical corporations. Cyagen has been cited in over 3,600 publications across highly reputed peer-reviewed journals such as Nature, JCI, Cancer cell, Immunity, and more – all in under 15 years. Please feel free to email animal-bank@cyagen.com or call at 800-921-8930 if you would like to request a free quote and detailed strategy for your next animal model project.