CRISPR-Cas9: How the Patent Dispute has Transformed Science Innovation

As CRISPR-based innovations begin to move into clinical testing and the dispute over core patents continues worldwide, CRISPR-Cas9 gene editing has been under increased scrutiny in both commercial and academic sectors. The complexity of the patent licensing landscape has considerable implications for companies seeking to commercialize CRISPR technologies. Researchers in academia are also experiencing an increased requirement for assays validating the precision of CRISPR-based animal models – with grant reviewers expressing similar concerns for off-target effects. Herein, we provide an overview of the CRISPR patent landscape and uncover how the development of CRISPR technology has transformed the scientific environment for researchers across academia and commercial research and development (R&D) worldwide.

In May 2012, the University of California, Berkeley (UCB) filed a patent application on behalf of Jennifer Doudna and Emmanuelle Charpentier groundbreaking observations that the bacterial CRISPR-Cas9 gene-editing system could be reprogrammed at the guide RNAs to target different DNA sequences. In December of the same year, the Broad Institute (with collaborators from MIT and Harvard University) also filed a patent application covering the CRISPR-Cas9 gene editing technology’s applications in eukaryotic cells for Zhang Feng and his colleagues. Broad requested an “accelerated examination” of its application that sped up the United States Patent and Trademark Office (USPTO) review process. Despite filing after UCB, the Broad US patent (8,697,359) was issued in April 2014 – initiating the dispute over patent rights that continues today.

UCB quickly took action to request a patent interference hearing, which was approved by the US Patent and Trademark Office's Patent Trial and Appeal Board (PTAB) in December 2015. In February 2017, the PTAB three-judge panel made the first ruling that the Broad’s innovations were distinctly patentable subject matter from the UCB patent filings. This decision was upheld in September 2018 by the US Court of Appeals for the Federal Circuit: securing the US position that Broad’s claims are all limited to CRISPR-Cas9 systems in a eukaryotic environment. Interestingly, on June 24, 2019, the PTAB initiated a new interference process that challenges the validity of UCB’s eukaryotic claims – designating UCB as the Junior Party, who will carry the burden of proof.6

The rights to use CRISPR-based gene editing is divided into three primary fields of use:

The main patent owners of CRISPR have granted exclusive rights to private spin-off companies that can seek investments to develop CRISPR applications.3 This enables these companies to negotiate individual licenses to third parties depending on the application. The Broad Institute, Harvard, and MIT have licensed their patents to Editas Medicine as part of this ‘inclusive innovation’ model. While Editas Medicine retains the right to exclusively use CRISPR technology to develop genomic medicines for targets of interest, other companies may apply to license some of its intellectual property (IP) to target genes of interest that Editas is not pursuing. A general overview of the CRISPR licensing landscape as of February 2019 is provided below: 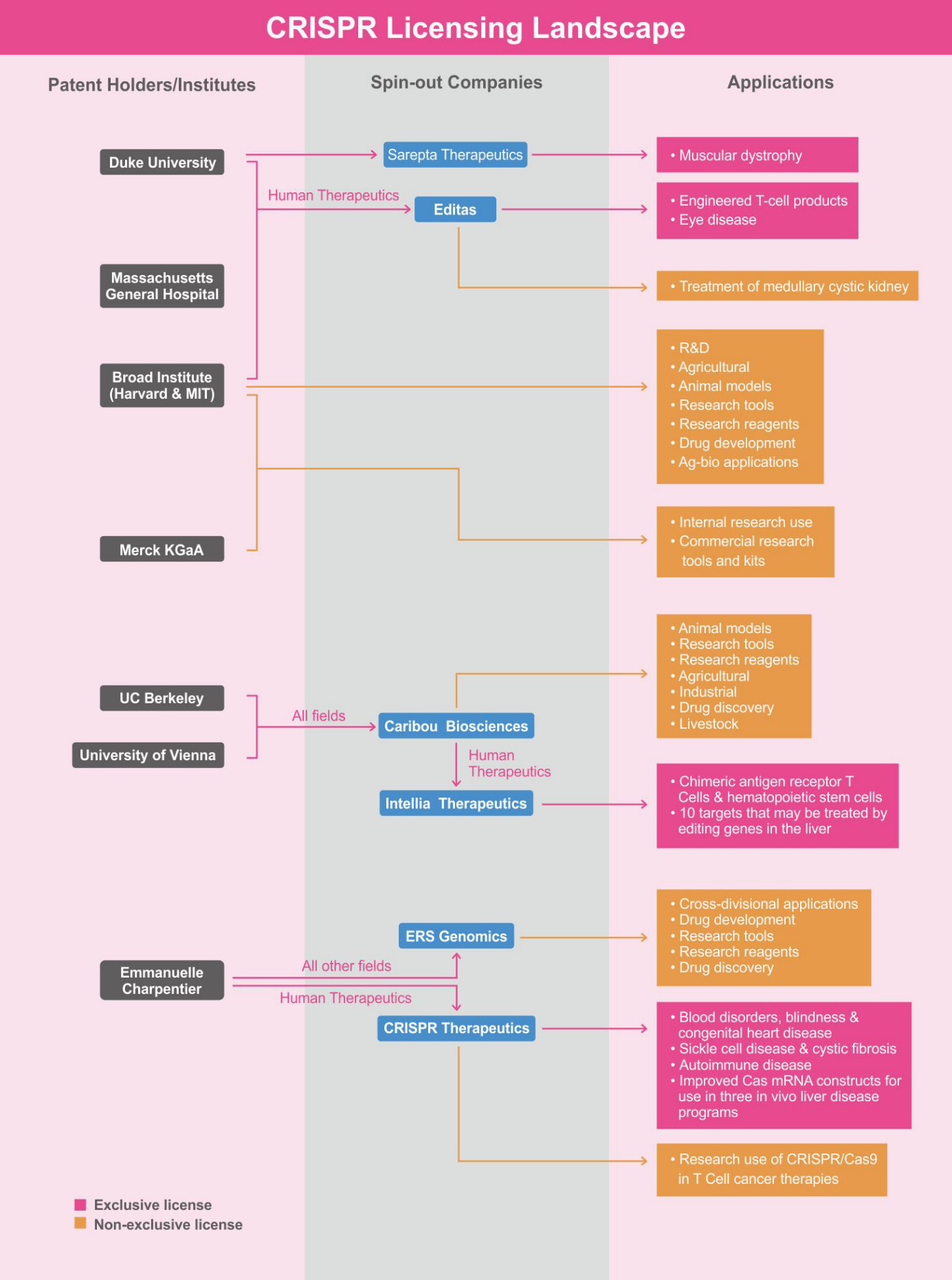 In February 2019, the Life Science business of Merck KGaA, Darmstadt, Germany, which operates in the U.S. and Canada under the name MilliporeSigma, was granted the first U.S. Patent for an improved CRISPR genome-editing method. Its CRISPR patent portfolio covers foundational and alternative genome-editing methods and includes granted patents in Australia, Canada, Europe, Singapore, China, Israel, and South Korea.5 By July 2019, Merck and the Broad Institute announced an agreement for granting non-exclusive licenses to CRISPR-based IP for use in commercial research and product development. The licensing framework is consistent with the Broad Institute’s long-standing practices – MilliporeSigma’s CRISPR IP “will become available royalty-free to non-profit academic institutions, non-profit business communities, and governmental agencies for their internal research”.1 Licensing will follow the ethical considerations of both the Broad and MilliporeSigma, thereby excluding certain applications of CRISPR technology. To work around these restrictions, each entity may continue offering licenses independently of this agreement.

In 2019, the nature of the CRISPR patent landscape continues to become more complicated as global patent offices rule differently on various claims – providing more uncertainty for commercial applications of the technology. CRISPR patent analytics data from IPStudies reveal a total of 3800+ patent families and 110+ licensing agreements as of February 2019, with an average publication of roughly 200 patent families each month. Developments are also occurring more rapidly in the licensing of CRISPR technology, “with more than 40 public announcements in 2018 (an increase of more than 50% over the former past three years), following the granting and/or consolidation of several pioneering patents in Europe and the USA”.2 With the ongoing dispute over the CRISPR-Cas9 core patents - and thousands of pending patent applications based on the same – it remains extremely challenging for companies to obtain effective authorization to commercialize CRISPR-based innovations on the global stage.

As a direct consequence of the surrogate licensing model (across specific application areas) and the unresolved claims to the core IP, there are significant risks to both commercial entities and academics seeking to utilize the technology. These risks may only increase as more patents are granted: individual claims will become narrower and harder to enforce as the global CRISPR IP landscape becomes increasingly complex. The protections afforded by the licenses granted thus far remain unclear as the ongoing legal dispute is underway. Even Broad has declared that “this is a complex patent and licensing landscape that threatens innovation” - calling UCB to join discussions for a coordinated licensing approach.6 In this context, the exploration of new genome editing methods with well-defined IP landscapes will become paramount for those seeking to develop new genomic medicines.

Addressing Limitations of CRISPR-Cas9 with Improvements in Traditional Gene Targeting

In terms of drug development, ​​CRISPR technology is most frequently used in the preparation of animal models which are used to accelerate research into diseases such as cancer and neurodegeneration – but additional gene modification techniques are available to address its limitations. Gene editing technologies used to generate animal models is largely divided into two types: CRISPR-Cas9 and ES cell (ESC) mediated (a.k.a. traditional gene targeting). Given that ESC mediated gene targeting is not covered by any issued patents, the commercial improvement of traditional gene targeting has been unfettered, leading to the innovative TurboKnockout® gene targeting system.

Although CRISPR-Cas9 technology is a rapid and flexible method for inducing mutations in vitro and in vivo, it has notable off-target risks that make it unsuitable for complex genetic modification projects. CRISPR-based models face challenges with generating precise point mutations: the particularly short guide RNA sequences that guide the associated nuclease can cause breaks to occur at unintended sites in the genome. Given their potential for off-target effects, CRISPR-based models often require whole-genome sequencing (WGS) to be performed prior to publication in leading journals. Those applying for grants often face the same concerns from reviewers – who may reject proposals using animal models generated using a CRISPR-based approach. Given that WGS is a high-cost test that often requires outsourcing, the advantages of CRISPR may quickly be outweighed by the increasing demand for WGS to verify accuracy in every model used. Furthermore, the US National Institutes of Health (NIH) announced the Somatic Cell Genome Editing (SCGE) program in January 2018 to support improved assays for evaluating the potential adverse biological effects of genome-editing tools. An editorial featured in Nature Medicine in August 2018 reinforces the need for researchers to prioritize “monitor[ing] possible unintended DNA alteration due to CRISPR in vivo … even as newer CRISPR methods offer a way to edit the genome without making the double-stranded breaks that seem to pose the greatest risk of accidental effects”.4

Traditional gene targeting is accurate and free of off-target effects, enabling its use for generating complicated animal models; however, the main drawback of traditional gene targeting has been an extended turnaround time, with projects averaging 10-14 months. With the freedoms permitted by the simplified IP landscape related to ESC mediated gene targeting, recent innovations provide all the advantages of ESC mediated techniques while shortening turnaround time to be nearly on-par with CRISPR projects. In 2015, Cyagen released a proprietary ESC mediated TurboKnockout® service that utilizes a super competent ES cell line, which generates 100% ESC-derived founder mice, alongside a self-deleting selection cassette, which eliminates the need to breed to Flp deleter mice. These innovations eliminate two generations of breeding, shortening production time by 4-6 months as compared to industry standard.  A comparison of CRISPR-Cas9, traditional, and TurboKnockout® gene targeting methods for generating animal models are provided in the following table:

TurboKnockout® is the gold standard for generating conditional knockout and knockin mouse models, featuring all of the benefits of both CRISPR- and ESC-based methods without any of the drawbacks. Whether you are developing a humanized mouse model or simply need to knockin large genomic fragments or cDNA, efficiency and specificity can be problematic. CRISPR is severely limited by knockin fragment sizes and requires a minimum distance between loxP sites for conditional knockout – these constraints are eliminated with TurboKnockout® gene targeting. Cyagen’s TurboKnockout® service allows for large fragments to be easily knocked into specific endogenous loci with no off-target effects and guaranteed germ-line transmission, providing founders in only 6-8 months with a 100% money-back guarantee.