At the dawn of the century, soon after the completion of the human genome project, the mouse genome was also completely sequenced. NIH embarked on the next endeavor to coordinate the knockout of every mouse gene and then systematically study their phenotype. These efforts have contributed enormously to the understanding of gene functions as well as genetic causes of human diseases.

The completion of the rat and mouse gene sequencing draft was an important milestone after the human genome draft sequence - as it initiated the rapid advancement of these murine models in the research of human genes and genetic illnesses.

Figure 1: The draft of mouse and rat genomes are published in top journals following the draft human genome.

The first two decades of this century have seen tremendous progress in understanding human diseases through manipulation of the mouse genome, including with knockout, conditional knockout, transgenic, knock-in, point mutation, and different levels of humanization. The advent of CRISPR technology has also greatly facilitated the genetic engineering of mouse genome. Now we can link a multitude of genetic mutations on individual genes to thousands of monogenic human diseases, a majority of which are also rare diseases.

There are said to be 7000 known rare diseases, most of which are of monogenic origin, totaling 350 million patients worldwide - over 90% of whom are still without effective treatment. In recent years, gene therapy has been making a comeback as a promising treatment of genetic diseases, after nearly two decades of dormancy from initial setbacks. Notably, the FDA has approved a handful of gene therapies, the highlights of which are the two adeno-associated virus (AAV)-based drugs: Zolgensma in 2019 and Luxturna in 2017, which respectively treat spinal muscular atrophy (SMA) and a rare inherited retinal dystrophy. These approvals have been followed by over a thousand ongoing clinical trials in the U.S. alone. This recent boom on gene therapy is fueled by the combination of AAV serving as a safe and effective vector for gene delivery, CRISPR gene editing technology and its base editing derivatives, and the latest LNP-mRNA technology - which has just been demonstrated by the COVID-19 mRNA vaccine.

The FDA approved gene therapies mentioned above both use AAV to deliver genes coding for the functional proteins that are missing in the patients living with the rare diseases, yielding phenomenal remissions, albeit the long-term effects are yet to be seen. However, other efforts are not always as straightforward. For example, the clinical trials using AAV to introduce micro-dystrophin to DMD patients who are carrying no functional dystrophin proteins - due to one of the 1000+ known disease-causing mutations on the dystrophin gene - have shown only marginal improvements 5 years on. An alternative solution is the newly FDA approved drug Amondys 45 which is an antisense oligonucleotide aimed at inducing exon skipping in the 8% of the DMD patients who have a mutation on the 45th exon of the dystrophin gene that stops the production of the functional protein. Many other exon skipping strategies are also being attempted on other exons where DMD-causing mutations happen relatively frequently. It appears that specific disease-causing mutations require specific corrective methodologies and gene therapy is likely to become an essential part of personalized medicine.

It is almost cliche to say that every single drug development project starts with a mouse model, but it has quickly become recognized as a standard model species for many areas of drug research. This is also true when it comes to gene therapy, except that the requirements for mouse models are likely to be more involved and geared more towards personalized treatments. By definition, a monogenic disease can be caused by either a deleterious mutation or a number of nucleotide repetitions on a single gene. However, a myriad of the above noted alterations on the single gene could result in the same disease, though possibly to varying severity. So, the “one drug fits all” model is not as viable in gene therapy, and the genetically modified mouse models usually used in conventional drug discovery are no longer adequate, especially when genetic alteration is attempted. 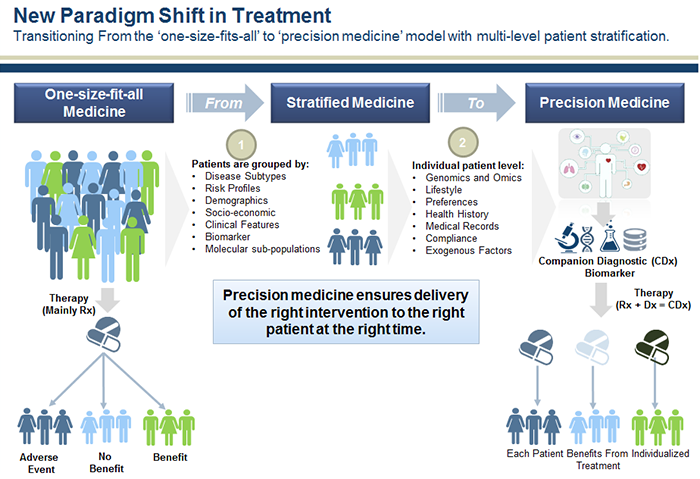 Figure 5: “One drug fits all” is out of date

To date, most of the reported humanized knockin genes are cDNAs, as opposed to genomic DNAs. However, the exclusion of introns, which might help to keep the strategy simple and cost down, can potentially be misleading due to missing or unwanted splicing. For example, when the xenobiotic sensor PXR (Pregnane X receptor) was originally humanized, some introns were excluded - it was later discovered that this caused a mis-splicing event.

When a mouse gene is replaced by a human ortholog through genomic knockin, the model shows greater physiological relevance, which includes maintaining the correct genomic context of a gene of interest, preservation of physiological expression levels and correct spatio-temporal expression patterns, and upkeep of human-specific regulation and human gene splicing. Moreover, the expressed protein is expected to display unique biochemical properties in humans, including potentially unique deleterious properties when mutated.

Although there is still much more unknown than known across both human and mouse biology, the decades of mouse genome humanization - from small scale alteration of base pairs to the substitution of certain sections, domains, exons, or even whole genes - has yielded valuable insights into what could potentially be the most productive humanization strategies in the future. 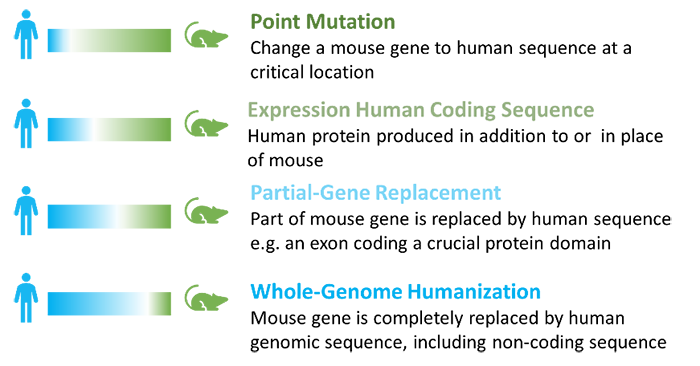 The APOE (Apolipoprotein E) gene encodes a protein involved in lipoprotein binding and metabolism. Humans have three APOE alleles (-E2, -E3, and -E4) among which the APOE4 variant is linked to cardiovascular disease and AD when its Arg112 allele causes another residue (Arg61) to be exposed, altering the protein’s normal binding property. However, while the single mouse APOE allele has APOE4-like Arg112, it lacks the human-specific Arg61 residue. When mouse APOE was humanized solely at residue 61 (Thr61 to Arg61) its lipoprotein binding preference changed to very low-density lipoproteins (VLDLs) (akin to human APOE4), resulting in cognitive deficits and increased susceptibility to cardiovascular disease, consistent with humans.

Although humanization at the minute scale (such as the example above) is able to reveal protein function and biochemical interactions, it is usually inadequate to recapitulate human biology and pathology to aid therapeutic development. The mouse APOE gene discussed above has also been genomically humanized in full in order to gain further insight into the role of APOE in disease, including the effects of the individual alleles. All three human APOE variants (-E2, -E3, and -E4) have been knocked in to the mouse APOE locus, including coding exons and intervening introns, placed under the control of the mouse promoter - which has quickly become one of the most wildly used and thoroughly studied mouse models. 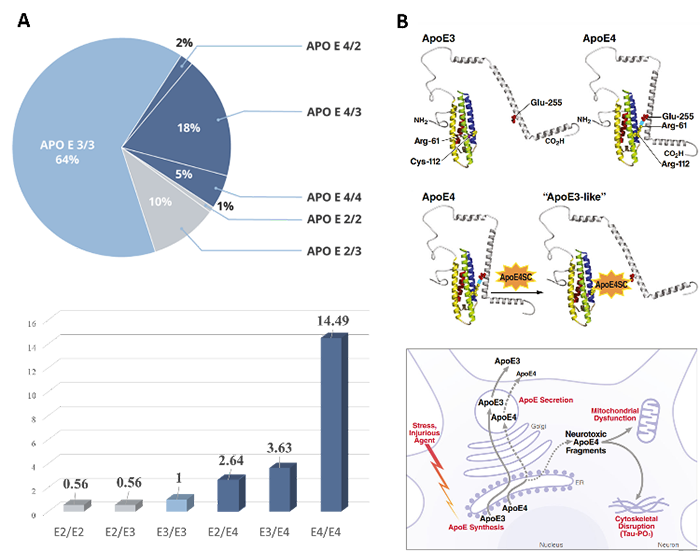 Figure 7: The influence of different subtypes of APOE in Alzheimer’s Disease6

Maintaining the human genome architecture is likely just as critical for normal gene expression in mouse models. In moving towards translational research, the presence of full-length human transcripts and proteins maximizes the potential to test therapeutics relevant for use in humans. An excellent example of this comes from the need to determine the optimal dose of human antisense oligomer (ASO) therapies against the human rather than mouse mRNA sequences. 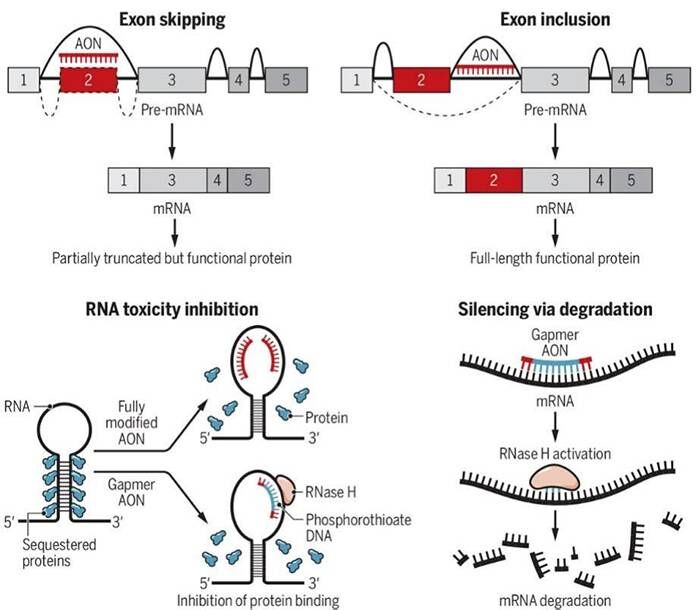 The human relevance of therapeutic experiments in a sufficiently humanized mouse model is also extremely important for the regulatory bodies in approving clinical trials. As an unwritten rule of FDA and other regulatory bodies, the animal models used in the pre-clinical studies need to mimic the human condition as closely as possible. The recent explosion in clinical trial initiations by the FDA - for example, the fast-tracking of an AAV mediated gene therapy trial LX1001 for APOE4 - is partly attributed to studies on highly humanized mouse models.

The decision whether to humanize just a codon, domain, exon, the coding region, or to go full scale (including introns and flanking regulatory regions) depends on the questions and purposes of the study. Most genomically humanized mice in the literature to date have small-scale changes within the coding sequence that result in chimeric human-mouse proteins, facilitating the study of critical aspects of protein biochemistry. However, increasingly, gene therapy studies on genetic diseases ask for full-scale humanized mouse models containing the full human genetic context, especially when the intended intervention targets the genome.