Immune checkpoint proteins (ICP) are a group of signaling molecules possessed by immune cells that can regulate and control the persistence of immune response. The immune checkpoint signaling pathway consists of inhibitory and stimulatory pathways that maintain self-tolerance and assist with the immune response. The efficacy of the immune response is determined by the delicate balance between costimulatory and coinhibitory signals. The signal transduction induced by the interaction of antigenic MHC (Major Histocompatibility Complex)/peptide complexes with T-cell receptor (TCR) is a prerequisite for T cell activation, but it is not sufficient to initiate T cell responses. Further signal transduction of costimulatory molecules is essential for the optimal activation, expansion, and differentiation of the T cells. These molecules are mainly divided into two categories: the immunoglobulin superfamily (IgSF) and the Tumor necrosis factor receptor superfamily (TNFRSF). Tumor necrosis factor receptor superfamily 4 (TNFRSF4) - also known as the OX40 receptor or CD134 - is only expressed upon activation of antigen presenting cells.

The OX40 receptor proteins are only expressed after full activation of CD4, CD8 T cells, and several other lymphoid and non-lymphocytes. OX40 receptors are crucial in maintaining an immune response beyond the first 72 hours - as OX40L binds T cells via OX40 receptors, it improves the survivability of T cells while also increasing cytokine production. 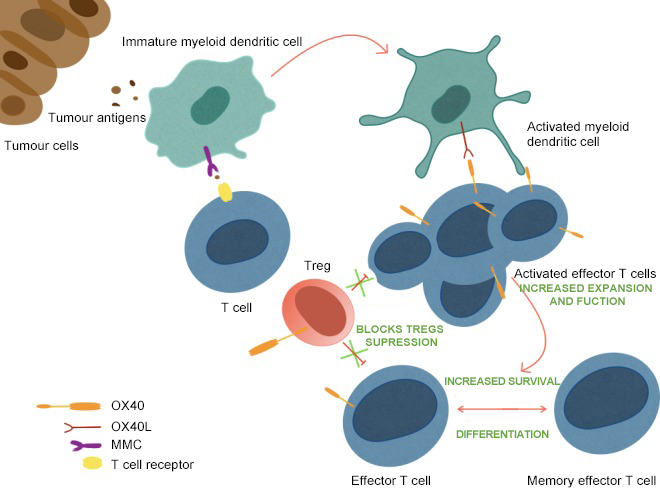 Figure 1: Mechanism of action of CD134/OX40. OX40 counterbalances the inhibition of immune cells (including T lymphocytes CD4+ and CD8+, NK cells and B lymphocytes) while directly stimulating effector T cells.

A limited number of studies have been performed with OX40 knockout (KO) mouse models to elucidate its molecular function in vivo. A 2008 study9 in OX40/TNFRSF4 knockout (KO) mice suggested that this receptor plays a role in CD4+ T cell response, as well as in T cell-dependent B cell proliferation and differentiation. It has been shown that OX40 induces expression of proteins with cell-cycle progression (i.e., survivin) and anti-apoptotic (i.e., Bcl-2, Bcl-xl and Bfl-1) properties. Additionally, the OX40 receptor has been shown to activate NF-κB through its interaction with adaptor proteins TRAF2 and TRAF5.

Cyagen Knockout Catalog Models features over 10,000 KO and cKO mouse models with 100% pure B6 background, delivered as fast as 3 months!

Costimulatory receptors and pathways may be targeted to regulate T cell signaling and enhance the immune response against tumors. Many drugs that stimulate OX40 signaling have been developed based on in vitro results, including: OX40-specific agonist antibody, OX40L-Fc fusion Protein, dendritic cells (DC) transfected with OX40L mRNA, and tumor cells engineered to express surface OX40L. Table 1, below, features several examples of drugs developed to target OX40: 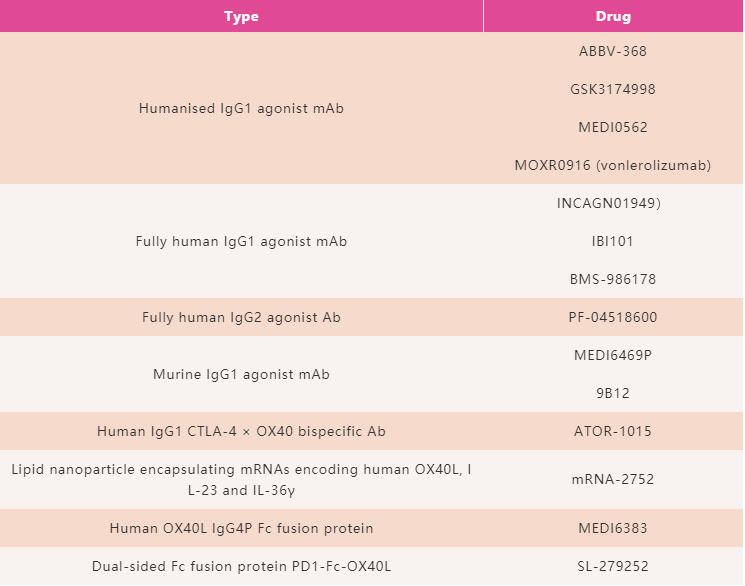 Several preclinical cancer models have shown immune cell regulation and anti-tumor activity against OX40. The combined treatment of anti-OX40 and anti-CTLA-4 leads to a significant increase in the proliferation and activity of CD4+ and CD8+ T cells - which translates into better results compared to monotherapy. Although OX40 targeted therapy has shown impressive results in tumor-bearing mice, preliminary clinical data indicate that its efficacy as a monotherapy in humans is not high. However, OX40 stimulation combined with immunotherapy targeting inhibitory receptors - such as anti-programmed cell death 1 (PD-1)/programmed death-ligand 1 (PD-L1) - is a promising strategy. It is hoped that the combination of different anticancer agents and OX40-targeted therapies can be validated in clinical studies soon and bring effective therapies to more patients.