Induced pluripotent stem cells (iPSCs) are pluripotent stem cells generated from adult cells by reprogramming [1]. The functions of iPSCs are similar to embryonic stem (ES) cells. IPS cells have strong differentiation ability and are consistent with the genetic background of the original cells. Under specific conditions, iPS cells can re-differentiate into specific cell types or tissues. Compared with primary stem cells, iPS cells have the following advantages: no ethical controversy, a wide range of sources, and ability to avoid immune rejection.

The gene sequences of transcription factors are integrated into host cells (such as fibroblasts) through retrovirus or lentivirus systems, and the long-term stable expression of transcription factors can initiate the reprogramming of terminally differentiated somatic cells. This method has a high induction efficiency, but the resulting iPS cells are at risk of tumorigenicity. Thus, many alternative gene delivery strategies that do not permanently integrate into the genome are used in order to avoid the risk of tumorigenesis, such as the use of episomal vectors, nonintegrating viral (e.g., adenovirus) vectors, or by adding transcription factors directly to the culture medium to allow cells to absorb transcription factors. Although these strategies work for the most part, the efficiency of generating iPS cell lines is significantly reduced compared with the approach of retroviral and lentiviral vectors’ direct integration into the gene.

Screening and Identification of IPS Cells

After somatic cell reprogramming, screening and identification are required to obtain the target iPS cells. Using ES cells of the corresponding species as a control, detection at the molecular and cellular levels was performed to determine whether somatic cells were successfully reprogrammed into IPS cells.

The expression levels of pluripotency markers, such as Oct4, Sox2, Nano, can be detected at the molecular level. Although the expression levels of these genes vary between species, they are generally expressed at high levels. These marker genes can also be detected by immunofluorescence staining, and if there is a positive signal, it also indicates pluripotency. At the same time, it can also detect the methylation degree of endogenous stemness marker promoters. In addition, the activity of telomerase needs to be detected to determine the immortalization ability of IPS cells.

At the cell level, it can be judged by observing the morphology of the cells: iPS cells are similar to ES cells in morphology, and they have the characteristics of fast growth rate, clustered growth, high nuclear-cytoplasmic ratio, long-term passage, and positive AP staining. In addition, differentiation ability and karyotype need to be tested. Due to the randomness of foreign gene integration, the generated IPS cells will have a higher proportion of abnormal karyotypes.

CRISPR-mediated gene editing technology can effectively and precisely perform knockout, point mutation, and knock-in of target genes. In recent years, CRISPR technology and iPS cells have shown potential applications in gene research and disease treatment. When CRISPR is applied to iPS cells, a huge potential was unlocked for researchers.

Through gene editing technology, the disease-causing genes from the patient's iPS cells are corrected, and then the gene-edited iPS cells are differentiated into specific cells, tissues, and organs. Finally, it is transplanted back into the patient for treatment, which is an ideal therapy for the combination of iPS cells and gene editing. For example, skin or blood cells are re-edited into iPS cells, and the CISH gene is knocked out using CRISPR/Cas9 technology to obtain CISH−/− iPSCs, which are finally differentiated into CISH−/− iPSC-NK cells  (Figure 1). The results showed that CISH−/− iPSC-NK cells had a stronger inhibitory ability to tumor growth in a leukemia xenograft model, and the persistence of CISH−/− iPSC-NK cells in vivo was also significantly increased. Figure 1. Generation of CISH-KO NK cells from human iPSCs. A–B. To demonstrate normal CIS expression iPSC-NK and PB-NK cells were incubated without cytokines for 8hrs and then simulated with (A) 100 U/ml IL-2 or (B) 10ng/ml IL-15 for the indicated times, then CIS expression was analyzed by immunoblotting (IB). GAPDH was used as a loading control. C. Scheme of CRISPR/Cas9-mediated CISH KO using two guide RNAs (gRNA) located in direct and complementary strand targeting exon 3 of the CISH gene. D. Schematic representation for deriving clonal CISH−/− iPSC-NK cells from human iPSC. CRISPR/Cas9 mediated CISH KO was performed in WT iPSC, followed by identification of CISH−/− iPSC at the clonal level. After clonal expansion, CISH−/− iPSC were differentiated to CD34+ hematopoietic progenitor cells through hematopoiesis and then CISH−/− iPSC-NK cells through NK cell differentiation using the method previously reported. E. Comparison of sequence in CISH KO clone (obtained by Sanger sequencing) with CISH WT sequence (exon3, from 3067 to 3185) by Basic Local Alignment Search Tool (BLAST) showing frameshift mutations (red rectangle) in both alleles. All mutations occurred in gRNA targeted regions. F. WT-iPSC-NK cells and CISH−/− iPSC-NK cells were simulated with 10 ng/ml IL-15 for 8 hours and CIS expression evaluated by IB. Vinculin was used as a loading control. Data at A, B and F were repeated in 3 separate experiments. [3]

Gene-edited iPS cells can be inducibly transformed into various cells, tissues and organs, which can be used to construct various disease models. These disease models can be used for gene function research, disease mechanism exploration, and drug screening. For example, Kung et al. knocked down miR-26b in human iPSCs to explore the role of miR-26b in development and disease (Figure 2). The miR-26b knockout iPS cells exhibited normal karyotype, expressed pluripotency markers and differentiated into cells of the three germ layers. This provides a meaningful experimental model for studying development and elucidates the mechanism of dysregulation downstream of miR-26b in iPSC-derived human organoid disease models.

Figure 2. Knockdown and identification of miR-26b in iPS cells [4].

Both CRISPR and iPS cells have broad prospective application, but combining them perfectly is not an easy task. This is affected by many factors. As we can see from the previous introduction, the reprogramming of iPS cells is a complex and bumpy process, with difficulties such as low induction rate and harsh culture conditions. Applying gene editing to iPS cells will also have similar problems. For example, during the editing process, the conditions of iPS cell culture are much harsher than for ordinary cell lines. A little carelessness will easily make iPS cells differentiate and lose pluripotency. Additionally, after editing, it is difficult to screen single clones, which may lead to off-target effects.

Cyagen has many years of experience in cell gene editing and stem cell culture, and has the ability to achieve gene editing in iPS cells. For example, the Human TNFAIP8L2 gene was knocked out in iPS cells through CRISPR/Cas9-mediated gene editing technology. Through the knockout method of small fragments, two sgRNAs were designed from exon 2 of TNFAIP8L2 to knock out 300 bp of exon 2 (Figure 3). After PCR and sequencing identification, it was confirmed that TNFAIP8L2 knockout homozygous IPS cells were obtained (Figure 4). Then, by immunofluorescence staining, three pluripotency marker genes NANOG, OCT4 and SOX2 were detected, and positive signals could be detected (Figure 5), indicating that the knockout cells were pluripotent. 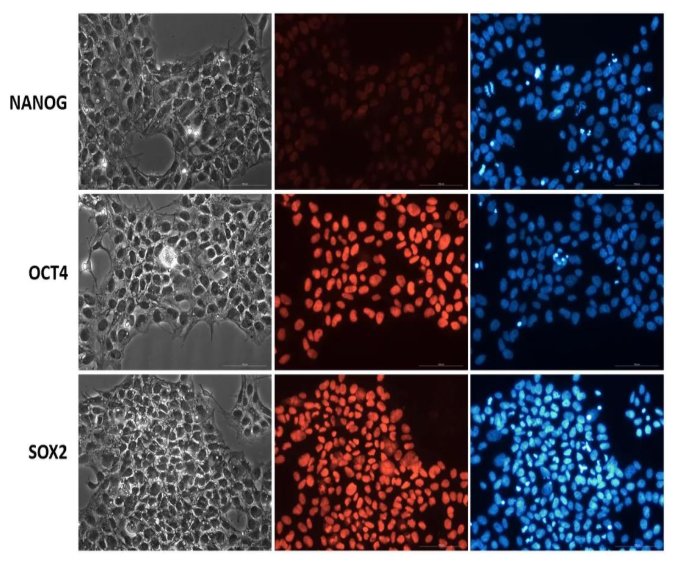