In the previous article, we shared some diseases related to MARCHF2 (a.k.a. MARCH2). Researchers studied the mechanisms of MARCHF2 by generating corresponding allelic variations of Marchf2 mice. As we know, many monumental findings have small beginnings. To this end, we introduce gene research' s next great example of this – Marchf2 knockout mice.

NF-kappaB essential modulator (NEMO) is a key regulatory protein that functions during NF-kappaB- and interferon-mediated signaling in response to extracellular stimuli and pathogen infections. Tight regulation of NEMO is essential for host innate immune responses and for maintenance of homeostasis. Researchers report that the E3 ligase MARCHF2 is a novel negative regulator of NEMO-mediated signaling upon bacterial or viral infection, described as follows. MARCHF2 interacted directly with NEMO during the late phase of infection and catalyzed K-48-linked ubiquitination of Lys326 on NEMO, which resulted in its degradation. Deletion of MARCHF2 resulted in marked resistance to bacterial/viral infection, along with increased innate immune responses both in vitro and in vivo. In addition, MARCHF2(-/-) mice were more susceptible to LPS challenge due to massive production of cytokines. Taken together, these findings provide new insight into the molecular regulation of NEMO and suggest an important role for MARCHF2 in homeostatic control of innate immune responses.[6]

In this study, female mice (C57BL/6J, 4–6 weeks old) were used as embryo donors for superovulation. After mating, resultant fertilized embryos were collected from the oviducts and cultured in KSOM medium. Microinjection was performed using an Olympus IX71 Inverted Microscope with the Narishigi microinjection system. gRNA (50 ng/μl) and Cas9 mRNA (100 ng/μl) were mixed and injected into the cytoplasm of the zygotes with visible pronuclei in M2 medium. The injected embryos were cultured overnight in KSOM medium at 37°C with 5% CO2. Embryos at the two-cell stage were transferred into oviducts of pseudopregnant ICR females. Tail samples from 3-week-old live pups were collected for extraction of genomic DNA and sequenced. Presumptive heterozygous March2+/− were mated. To screen March2 KO mice, T7E1 assays were performed using genomic DNA samples from tail biopsies. Briefly, the genomic region included RNA-guided endonucleases target site was PCR-amplified with nested PCR method, melted, and reannealed to form heteroduplex DNA, which was treated with T7 endonuclease 1 (New England Biolabs) and then analyzed by agarose gel electrophoresis. Once heterogeneous mice were excluded, additional T7E1 assay was conducted by mixing equal amounts of wild-type PCR products and WT and KO mice were separated by agarose gel electrophoresis (Fig 1.G), confirming the March2 gene knockout. 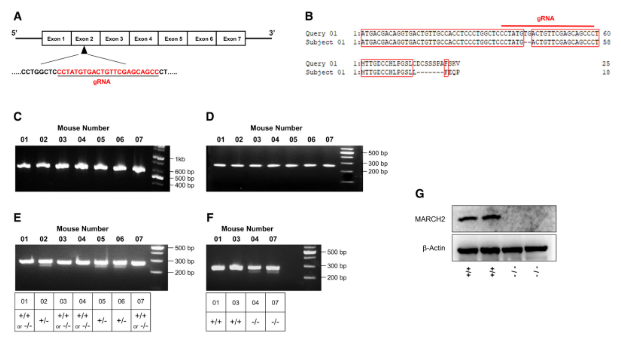 MARCHF2 plays a critical role in host defense in vivo

To evaluate the potential roles of MARCHF2 in innate immune responses, researchers generated MARCHF2−/− mice on a C57BL/6 background using the CRISPR-Cas9 system and verified genetic knockout of the MARCH2 gene (Fig 1A–G). MARCHF2−/− mice did not show any external abnormalities.

Second, to investigate whether MARCHF2 plays a role in response to bacterial infection, researchers challenged MARCHF2+/+ and MARCHF2−/− mice with a lethal dose of Listeria monocytogenes (Lm). As shown in Fig 2D and E, MARCHF2−/− mice were more resistant to bacterial infection than MARCHF2+/+ mice. To examine the effects on pathogen clearance, they examined the bacterial burden in the spleen and liver using colony-forming unit (CFU) titration assays (Fig 2F and G). The results correlated with those of the survival assay; the bacterial load in MARCH2−/− mice was significantly lower than that in MARCHF2+/+ mice. Next, they investigated whether the low bacterial burden in MARCHF2−/− mice was due to higher inflammatory responses in these animals. Serum, spleen, and liver samples from MARCH2−/− mice contained higher levels of IL-6, IL-12, CCL5, and CXCL10 than those from MARCHF2+/+ mice (Fig 2H–J). These results also indicate that MARCHF2 is involved in antibacterial innate immune responses in vivo, with a deficiency of MARCH2 strengthening antimicrobial immunity. 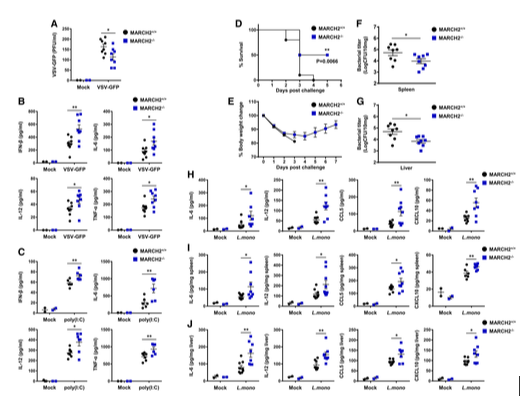 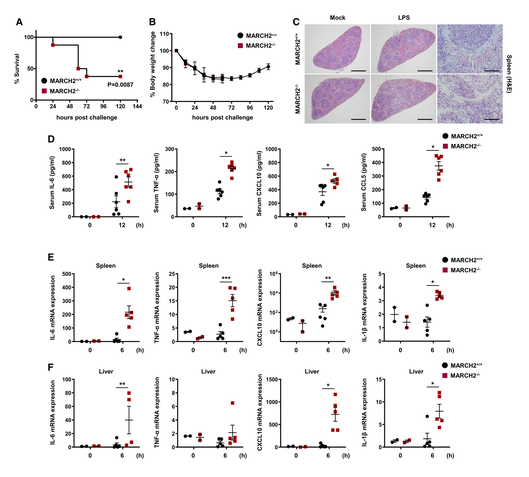 As described, Marchf2 interacts with NF-κB regulatory factor (NEMO) in the later stages of infection and further activates the expression of inflammatory pathway related factors. Genetic knockout of Marchf2 increased the resistance of mice to bacterial and viral infections, enhancing the innate immune response. Since Marchf2 plays an important role in virus infection, is it also a potential target in the development of new drugs for COVID-19 or future viral outbreaks?