In the previous article, we shared some of the rare diseases related to STAT3. Researchers studied the mechanism of STAT3 by generating corresponding allelic variations of Stat3 mice. As we know, many monumental findings have small beginnings. To this end, we introduce gene research' s next great example of this – Mut-Stat3 mice  – which has the potential to alter the behavior of or even eliminate autosomal dominant hyper-IgE syndrome (AD-HIES).

Mutations of STAT3 underlie the autosomal dominant (AD) form of hyperimmunoglobulin E syndrome (HIES). STAT3 has critical roles in immune cells and thus, hematopoietic stem cell transplantation (HSCT) might be a reasonable therapeutic strategy in this disease. However, STAT3 also has critical functions in nonhematopoietic cells and dissecting the protean roles of STAT3 is limited by the lethality associated with germline deletion of Stat3.[1] Thus, predicting the efficacy of HSCT for HIES is difficult.

To begin to dissect the importance of STAT3 in hematopoietic and nonhematopoietic cells as it relates to HIES, Scott M. Steward-Tharp and colleagues generated a mouse model of this disease. They found that these transgenic mice recapitulate multiple aspects of HIES, including elevated serum IgE and failure to generate Th17 cells, and found that these mice were susceptible to bacterial infection that was partially corrected by HSCT using wild-type bone marrow, emphasizing the role played by the epithelium in the pathophysiology of HIES.

The BAC transgene was constructed by modifying a 185-kb mouse BAC containing the mouse Stat3 gene (RP24-236G5). A 1-kb construct carrying 2 arms of homology (∼500 each) was ligated into the pSV1-RecA shuttle vector, which was transformed into DH10B-competent cells expressing the RP24-236G5 BAC. Proper insertion of the deletion and final bacterial selection on chloramphenicol/fusaric acid plates were monitored by polymerase chain reaction (PCR) using primers internal and external to the homologous construct. The deletion consisted of a 1,163 bp DNA fragment starting with the last codon of Stat3 exon 15 and ending at the 5ʹ of exon 16; the construct also included silent mutations in the last 7 remaining codons of exon 15 to allow specific amplification of WT and mutant transcripts by PCR. [1]

Figure 1. Generation of a mouse model that recapitulates key aspects of human AD-HIES. Depiction of mouse Stat3 gene within RP24-236G5 BAC. Exons 15 and 16, which encode part of STAT3 DNA binding domain, are highlighted. Based on mutations observed in HIES patients, the BAC was modified to delete valine 463 from the binding domain (from PVVVI in WT to PVVI in mutant) (A). [1]

Additional findings indicated important roles for STAT3 in preserving host defense based on its functions in hematopoietic cells and in epithelial cells, as well as limiting inflammatory responses.[2] Mouse embryos that have a complete ablation (homozygous knockout) of Stat3 die in utero; in this respect, the discovery of a group of patients with dominant-acting Stat3 mutations was unanticipated. [3]  The finding immediately raised the question as to whether the existence of such patients could be explained by incomplete impairment in STAT3 function or whether there were species-specific differences in the function of STAT3, as had been previously observed in another key cytokine signaling gene, Jak3. [4] To address these points, researchers set out to create a mouse model of HIES. In the present study, the classical multisystem HIES was replicated by expressing a patient-derived mutant allele that affects STAT3 DNA binding activity in a dominant negative fashion. [3] In this context, the described system stands in contrast to models in which Stat3 is fully deleted in the germline. [5]  The disease is probably best characterized as resulting from impaired, but not abrogated STAT3 function. The mut-Stat3 mice displayed many features characteristic of patients with HIES, namely, impaired Th17 differentiation and the dysregulation of IgE in the steady state. 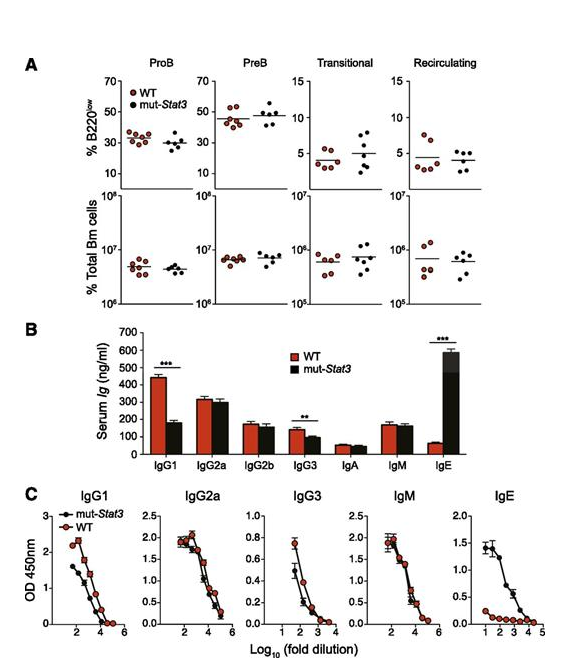 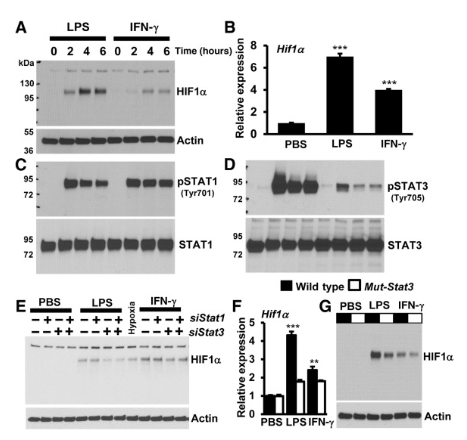 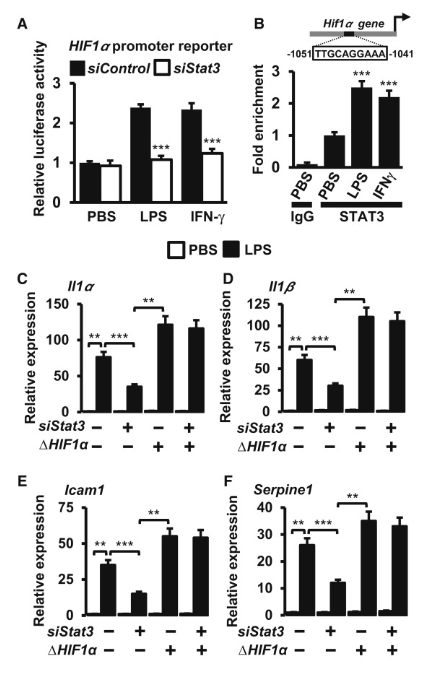 Figure 4. STAT3–hypoxia-inducible factor-1α (HIF1α) axis modulates inflammatory gene expression in macrophages. A: RAW264.7 cells were transfected with an HIF1α promoter-driven luciferase reporter construct in the presence of control or Stat3-specific siRNA. These cells were stimulated with lipopolysaccharide (LPS) or interferon (IFN)-γ for 6 hours, and cell lysates were analyzed for luciferase activity. B: Wild-type mice bone marrow–derived macrophages were stimulated with LPS or IFN-γ for 4 hours, and chromatin immunoprecipitation analysis was performed on Hif1α promoter (−1041 to −1051) utilizing anti-STAT3 antibody. C–F: RAW264.7 cells were cotransfected with a combination of Stat3-specific siRNA or oxygen-stable form ΔHIF1α plasmid and stimulated with 100 ng/mL LPS for 5 hours. C–F: Total RNA from these experiments was evaluated for expression of Il1α (C), Il1β (D), Icam1 (E), and Serpine1 (F) by RT-qPCR. Data were analyzed by analysis of variance, followed by Bonferroni post-testing. Values are reported as means ± SD (A–F). n = 3 (A and B); n = 4 (C–F). ∗∗P < 0.01, ∗∗∗P < 0.001. PBS, phosphate-buffered saline. [6]

The possibilities and applications of the Stat3 mouse model seem limitless. They present an unparalleled gene therapeutic approach to Autosomal dominant hyper-IgE syndrome (AD-HIES)，Large granular lymphocytic (LGL) and more. But much remains to be learned about these incredible functions. As we continue to understand more about how mouse models function and how they can be utilized to deliver life-saving treatments, the impact in biomedical research will only grow.