Mechanisms of Angelman Syndrome and Models for Research

Angelman syndrome (AS) is a rare brain disorder that affects about 1 in 20,000 newborns. Children with AS don't look much different from normal children on the surface—smiling and gentle. However, behind the angelic smile, there are a number of neurodevelopmental problems. The current treatment strategies for Angelman syndrome mainly focus on gene therapy, and the gene delivered by adeno-associated virus (AAV) vector treatment holds promise as a cure for the disease.

Mouse model of Angelman syndrome
Ube3a is an E3 ubiquitin ligase with genome-wide impact on neurodevelopmental disease. A study showed that a Tamoxifen-induced Ube3a gene knockout model constructed in the background of the C57BL/6 mice present significant differences from control mice in the rotarod performance, marble-burying, open field exploration, nesting, and audiogenic seizure threshold tests. However, the reintroduction of the Ube3a gene in early embryos of Ube3a knockout mice can avoid the appearance of the Angelman syndrome phenotype[1].

Another study showed that maternal Ube3a-deficient mice (Ube3am-/p+) had acquired learning deficits in the Morris water maze, which were reversible with reintroduction of  the gene. The results also showed that Ube3am-/p+ mice exhibited a series of phenomena such as dyskinesia, hypoactivity, reduced feeding, reduced marble burying, and lack of fear conditioning in the rotation task experiment [2]. 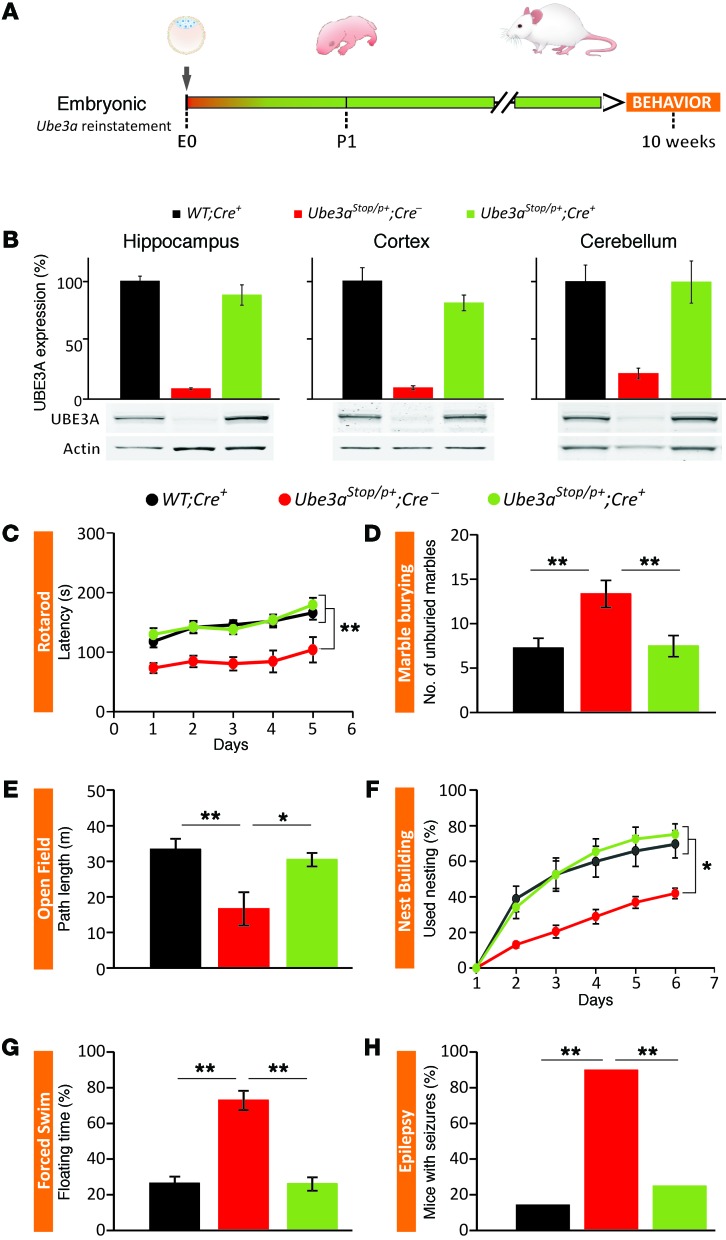 Some scholars have constructed a rat model with a complete knockout (KO) of the Ube3a gene by using CRISPR/Cas9 technology. Compared to a mouse model lacking only one gene region, the Ube3a gene is completely knocked out in this rat model, making the model similar to most cases of AS human gene deficiency. The complete KO rat model better mimicks the causative factors of AS and shows typical AS symptoms, including movement disorders, and impairments with learning and memory[3].

The current treatment strategies for AS mainly focus on a gene therapy approach. Some researchers have attempted to restore the expression of paternally derived Ube3a by targeting the noncoding RNA Ube3a-ATS. These researchers used the CRISPR/Cas9 gene editing system to knock out Ube3a-ATS in mouse nerve cells by injecting an AAV vector into the brain of AS model mice so that the expression of Ube3a derived from the father was restored. Behavioral experiments show that the symptoms of treated model mice have been significantly improved [2].

Another research team tried to deliver the therapeutic Ube3a gene to the brain of AS model mice by using AAV as a vector. The team constructed an AAV vector with a double transcript of the Ube3a gene, which can simultaneously transcribe and express two versions of the Ube3a protein with different lengths. When it is expressed in neurons, it will be close to the normal 3:1 ratio expressing short and long versions of Ube3a protein. The researchers packaged the therapeutic Ube3a gene into the AAV virus and injected it into the brain ventricle of newborn AS model mice. They found that the AS mice injected with the Ube3a gene virus vector began to change brain neurons a few days after the injection. Moreover, neurons in the brain began to become active and reached levels close to that of normal mice.

This treatment restored the motor skill learning, burrowing, and nesting behavior of AS model mice while the untreated AS model mice developed AS-like symptoms. In addition, the treated mice were not as susceptible to experimentally induced seizures as untreated mice. Importantly, no apparent adverse effects were observed with this gene therapy. 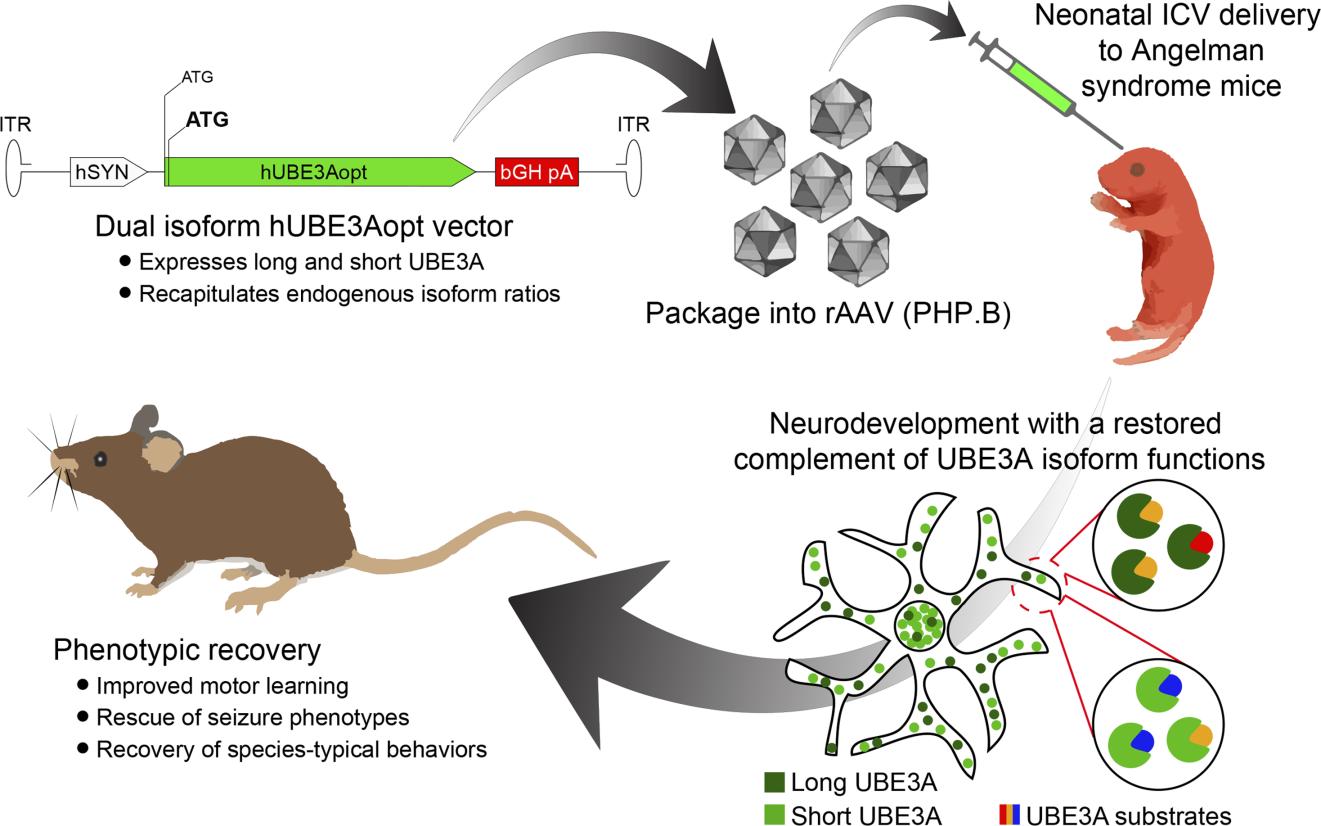 RDDC facilitates research for rare diseases such as Angelman syndrome (AS)

After logging into the RDDC, users can fully access information about the corresponding rare diseases, but also use various AI tools to predict the pathogenicity and splicing site changes. These AI tools aim to help accelerate the research on the diagnosis and treatment of rare diseases and the development of treatment plans. Researchers worldwide are welcome to log into the website (rddc.tsinghua-gd.org) to access the database and use the AI tools!

*Disclaimer: RDDC data and tools are only for scientific research and reference only, and cannot be used as the conclusion of medical diagnosis and evaluation.