Nppa (natriuretic peptide A) is a cardiac hormone that dynamically changes its spatiotemporal expression during heart development. Before birth, Nppa mRNA expression is first observed in the ventricles of the heart, before shifting expression to the atrial appendages. In a healthy post-natal heart, expression of Nppa is restricted to the atria and is re-expressed in adult ventricles in response to pathological stress as a part of a fetal gene activation program.

Due to the unique expression pattern of Nppa, the Nppa cardiac gene has been extensively studied as an important marker for the study of chamber formation and specification of the heart, as well as molecular mechanisms of cardiac hypertrophy and heart failure. Herein, we uncover the limitations of previous Nppa reporter mouse lines and present a new model for the improvement of cardiac development and disease pathology studies.

Limitations of Past Models

Several Nppa reporter mouse lines have been proposed for the study of atrial development and chamber specification, but previous models were unable to precisely recapitulate the unique spatiotemporal expression pattern of endogenous Nppa. Two of the primary Nppa reporter models used in past research are discussed below, along with their limitations for the study of heart development:

These findings suggest that Nppa regulatory sequences used for generation of transgenic mice do not encompass all the necessary regulatory sequences to control the dynamic expression of Nppa during heart development. Moreover, standard transgenic approaches typically provide variable reporter gene copies due to nonspecific integration of a reporter gene into the target genome – leading to non-biological expression levels of a reporter gene.

A new Nppa reporter mouse line has been generated that addresses the shortcomings of the previously proposed models by using a specific knock-in approach: embryonic stem cell (ESC)-mediated homologous recombination. The detailed generation strategy and results is provided in Figure 1. 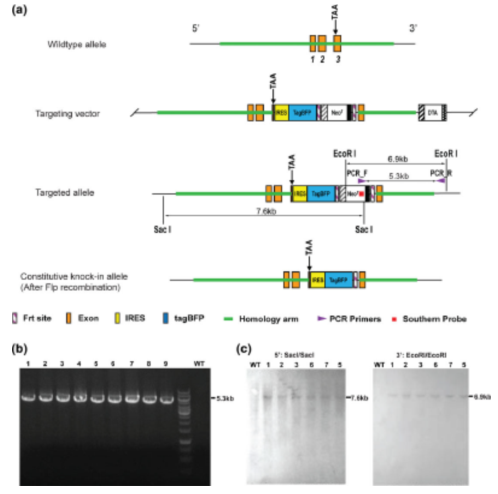 GFIGURE 1: Generation of Nppa-tagBFP reporter knock-in mouse line. (a) Schematic illustration of the gene targeting strategy. IRES-tagBFP-FRT-NeoR-FRT cassette was inserted into 30-UTR of the Nppa gene locus. The NeoR gene cassette is flanked by two FRT sites. By homologous recombination, the mice carrying IRES-tagBFP-FRT-NeoR-FRT cassette (targeted allele) were generated. By cross breeding the chimera mice with FLP transgenic mice, Nppa-tagBFP knock-in mice carrying constitutive knock-in allele were generated by deleting NeoR cassette. (b) PCR screening for the targeted ESCs using the indicated PCR primers in (a). Nine expanded clones demonstrated expected size of PCR band (5.3 kb). A wild type (WT) clone did not show the band. (c) Southern blot analyses to confirm the correctly targeted ESC clones. Using six (1, 2, 3, 5, 6, and 7) of nine PCR positive ESC clones, restrictive digestions with the indicated enzymes and hybridizations with the indicated southern probe in (a) were performed. Targeted ESCs for Nppa-tagBFP knock-in displayed 7.6 kb (with SacI) and 6.9 kb (with EcoRI) bands, whereas WT ESCs did not show any band. The southern blot results confirmed that all six expanded clones (1, 2, 3, 5, 6, and 7) were correctly targeted.

The endogenous Nppa promoter region is maintained by knocking-in a tagBFP reporter cassette into the 3’-UTR of the Nppa gene, thereby eliminating the possibility of improperly-controlled reporter expression often found in transgenic reporter models1. Compared to the previous transgenic models, this newly-presented Nppa-tagBFP reporter knock-in mouse line accurately replicates the dynamic and complex spatiotemporal expression pattern of Nppa during pre- and post-natal heart development. Additionally, Nppa-tagBFP expression was induced by pathological cardiac stress, so the reporter can function as visual indicator for pathological remodeling of the heart. Furthermore, both the heterozygous and homozygous mice carrying the knock-in allele are healthy and fertile. For all of these reasons, the new Nppa-tagBFP reporter knock-in mouse like serves as a valuable tool for studying chamber formation and specification during heart development as well as fetal gene reactivation during heart diseases.

Cyagen’s novel, accelerated ESC based approach - TurboKnockout® can create conditional knockout, reporter knockin, and humanization mice in as fast as 6 months. It is made possible by two innovations - a self-deleting selection cassette and a super competent ES cell line - which together eliminate two generations of breeding. In the case of conditional knockout, founder animals made from ES cells can be bred directly to tissue-specific Cre mice.

As the world’s leading provider of custom mouse and rat models, Cyagen provides expert assistance, efficiency, and economy along with the best guarantees in the industry – no animals, no charge. Contact us today to request a free detailed gene targeting strategy for your next animal model project and discover how Cyagen can propel your research.

"Cyagen made two reporter knock-in mice (i.e. MLC-2v-tdTomato and Nppa-tagBFP) which were used in my recent publications.  Both reporters were precisely expressed where and when they should express.  Cyagen was very responsive and responsible even after I received the mice.  I am sure that I will work with Cyagen again."