Custom Models
Testimonials
"I've been very happy with Cyagen's service so I've been referring a lot of colleagues... thanks for the great service."
'- Washington University in St. Louis
> more
Citations
Identification of Natural Regulatory T Cell Epitopes Reveals Convergence on a Dominant Autoantigen.
IMMUNITY 47:107 (2017) IF=22.845
> more
You may also be interested in

We provide a full catalog of expert model generation services with guaranteed genotype and multiple import options that mitigate quarantine.

» Request a Quote or Information

Humanized knockin mice - mouse models with an endogenous gene replaced by a human gene or genomic sequence - are used in human gene function and disease research. While either nuclease-induced genome editing or traditional gene targeting may be used to develop humanized knockin (KI) mouse models, each method offers its own benefits for model development. The TurboKnockout® gene targeting service brings together the advantages of each method to provide complex gene modeling in C57BL/6 or BALB/c mouse models - including large-fragment knockins (LFKIs) up to 300 kb - on an accelerated timeline.

A humanized mouse is defined as a mouse model in which a portion or the full mouse gene sequence has been replaced by its human counterpart. The human gene knockin (KI) is expressed under the control of the wildtype mouse regulatory sequences. Humanized mouse models have been used in immunology, cancer research, drug discovery, transplantation research, infectious disease research, and other fields.

By introducing point mutation(s) into homology arms or the targeting vector, desired mutation(s) can be incorporated into the target gene. The mutated gene is expressed under the control of the wildtype gene regulatory elements. Similarly, a visually detectable marker gene (such as GFP or lacZ) can be knocked into a gene locus to replace the coding sequence of the target gene for the purpose of monitoring the promoter activity of the gene. Alternatively, a marker or an epitope tag can be knocked into the end (or less frequently, the beginning) of the coding sequence to form a fusion protein, allowing examination of target gene expression and protein localization/trafficking. 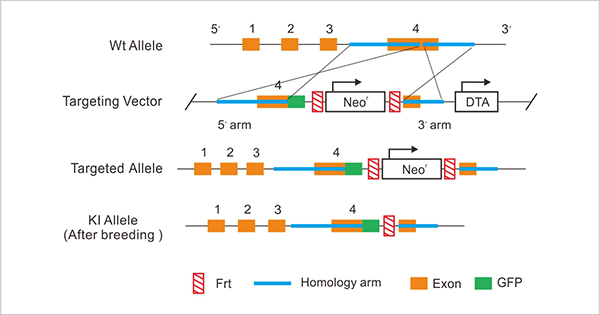 ROSA26 is a safe harbor locus that has been widely used for achieving both global and conditional expression of the introduced gene in knockin (KI) mice. The gene of interest is targeted into the first intron of this locus. The expression of the gene can be driven by the endogenous ROSA26 promoter or by a promoter of choice that is integrated into the locus along with the gene.

* You can choose to receive F0 founder animals and perform their own breeding to F1 mice. To ensure the successful generation of F1 mice and germline transmission, breeding of F0 animals require adherence to Turboknockout® breeding protocol, which will be supplied to you. You can also choose to have Cyagen perform F1 breeding, which adds 1-3 months to the projected turnaround time. You can choose to breed F0 founders to wildtype mice or to other stains such as Cre deleter strains of your choice; additional service fees may apply.

Note: For special knockout/knockin services not listed above, please inquire about availability and pricing. The turnaround time above does not include the time for obtaining host institution’s approval for mouse importation and transit time during shipping.

Compared with CRISPR/Cas9-based techniques, TurboKnockout® is free of patent disputes, provides precise models on a comparable timeline, and is the technology of choice among our clients performing drug development projects.