Cyagen assists in the research of rare diseases and provides various mouse/rat models, including the Cep290 knockout mouse. This article focuses on the gene CEP290 and its related rare diseases, aiming to help interested researchers continue to build on scientific literature and knowledge.

CEP290 (Centrosomal Protein 290) is a Protein Coding gene, encodes a centrosomal protein involved in ciliary assembly and ciliary trafficking. [2]  This gene encodes a protein with 13 putative coiled-coil domains, a region with homology to SMC chromosome segregation ATPases, six KID motifs, three tropomyosin homology domains and an ATP/GTP binding site motif A. The protein is localized to the centrosome and cilia and has sites for N-glycosylation, tyrosine sulfation, phosphorylation, N-myristoylation, and amidation. Mutations in this gene have been associated with Joubert syndrome and nephronophthisis. The presence of antibodies against this protein is associated with several forms of cancer.

Leber congenital amaurosis (LCA) is the most common cause of inherited childhood blindness with roughly 3 out of 100,000 children around the world affected by the disorder. [4]

Symptoms of LCA appear within the first years of life, often resulting in significant vision loss and potential blindness.

The most common form of the disease, LCA10, accounts for approximately 20-30 percent of all LCA patients. LCA10 is caused by mutations in the CEP290 gene; there are currently no treatment options available for LCA10. 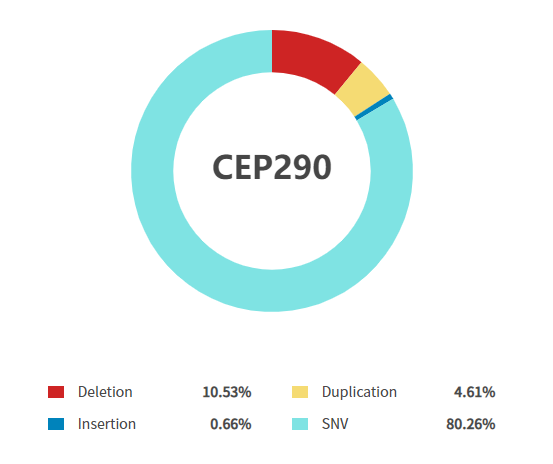 In 2019, Maeder and colleagues have developed EDIT-101, an experimental genome-editing medicine designed to remove the abnormal splice donor site caused by the IVS26 mutation in CEP290 (which most commonly causes LCA10), and thereby restore normal CEP290 expression. In their study, the researchers showed that subretinal delivery of EDIT-101 in a human CEP290 IVS26 knock-in mouse model resulted in fast and sustained CEP290 gene editing. They also demonstrated productive gene editing in a comparable surrogate nonhuman primate vector at levels meeting the target therapeutic threshold. [6]

In any case, gene therapy brings hope for rare genetic diseases, let's wait and see how EDIT-101 performs next.

Joubert syndrome is a neurodevelopmental disorder, characterized by malformation of the mid and hindbrain leading to the pathognomonic molar tooth appearance of the brainstem and cerebellum on axial MRI.

Currently, precision treatments for Joubert syndrome are only available as part of research studies (investigational). Gene therapy has been used to improve visual function for specific types of retinal dystrophy by direct retinal injection of expression vectors in humans. Future trials are likely to involve the CEP290 gene, a major cause of Leber congenital amaurosis and Joubert syndrome. Alternatively, antisense oligonucleotides can augment gene function by blocking aberrant splicing or by causing exons with deleterious variants to be skipped. These treatments are still in early development for Joubert syndrome but have been used for other disorders in humans such as spinal muscular atrophy (SMA). Future medications targeting specific pathways that are disrupted in Joubert syndrome may be beneficial, but this work is also in its infancy.

Over the past year, Cyagen has focused on developing educational resources and initiatives to assist the rare disease research community. To help inform our R&D of precise animal models for rare disease studies, we initiated a Rare Disease Model Collaboration Program in the first quarter of 2021. With this program, we aim to build a community of rare disease researchers with ideas for the next generation of animal models needed to advance their field of study.