A rare disease is defined by the European Union as a condition that affects fewer than 1 in 2,000 people within the general population. Currently, there are over 6,000 known rare diseases and newly discovered conditions are being described through medical literature on a regular basis. However, these rare diseases still affect a significant portion of the population, as roughly 1 in 17 people will be affected by a rare disease. The majority of rare diseases currently have no effective treatment [1].

Cyagen assists in the research of rare diseases and provides various mouse/rat models, including the Stat3 knockout mouse. This article focuses on the gene STAT3 and its related rare diseases, aiming to help interested researchers continue to build on scientific literature and knowledge.

The STAT3 (Signal Transducer And Activator Of Transcription 3) gene is part of the STAT gene family. These STAT family genes provide instructions for making proteins that are part of essential chemical signalling pathways within cells. When STAT proteins are turned on (activated) by certain chemical signals, they move into the cell's nucleus and attach (bind) to particular areas of DNA. The STAT proteins bind to regulatory regions near genes, which allows the proteins to control whether these genes are turned on or off. STAT proteins are called transcription factors on the basis of this action.

Through its regulation of gene activity, the STAT3 protein is involved in many cellular functions. It helps control cell growth and division (proliferation), cell movement (migration), and the self-destruction of cells (apoptosis). The STAT3 protein is active in tissues throughout the body. It plays an important role in the development and function of several body systems and is essential for life. In the immune system, the STAT3 protein transmits signals for the maturation of immune system cells, especially T cells and B cells. These cells help control the body's response to foreign invaders such as bacteria and fungi. In addition, the protein is involved in the regulation of inflammation, which is one way the immune system responds to infection or injury, and it plays a role in cellular processes that promote allergic reactions. In the skeletal system, the STAT3 protein is involved in the formation of specialized cells that build and break down bone tissue. These cells are necessary for the normal development and maintenance of bones[2].

More than 100 germline mutations in the STAT3 gene have been identified in people with autosomal dominant hyper-IgE syndrome (AD-HIES), a disorder of the immune system that leads to recurrent skin and lung infections as well as abnormalities of the bones, teeth, and blood vessels. The condition is characterized by high levels of an immune system protein called immunoglobulin E (IgE), which is involved in allergic reactions. Most of the mutations involved in this condition change single amino acids in the STAT3 protein. 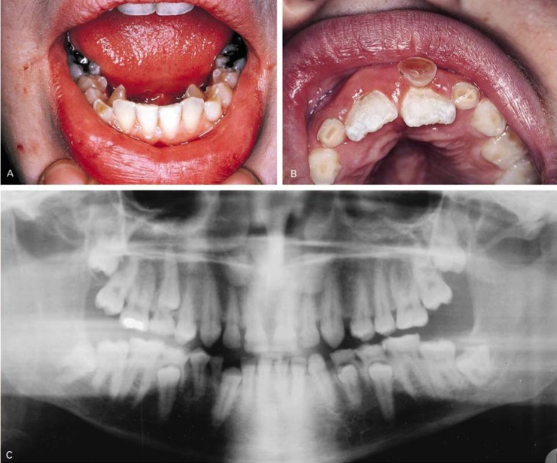 Figure 1. Failure of Dental Exfoliation in Patients with the Hyper-IgE Syndrome. Panel A shows the lower canines of Patient 8 (age, 11 years), and Panel B shows the upper central incisor of Patient 4 (age, 8 years) and a high palate. Persistent deciduous teeth required extraction in both subjects. Panel C shows a panoramic radiograph of Patient 11 (age, 23 years), revealing retention of five primary teeth with unresorbed roots. The eruption of four upper and lower premolars has been blocked by retained primary teeth, and a retained deciduous right lower canine can be seen behind and lateral to its erupted permanent counterpart. In contrast, timely removal of unshed primary teeth in the upper left quadrant of the patient's mouth (upper right) allowed normal eruption of the premolars[3].

Figure 2. Characteristic Facial Appearance of Men and Women of Different Races with the Hyper-IgE Syndrome[3].

Changes in the STAT3 gene that cause AD-HIES alter the structure and function of the STAT3 protein, impairing its ability to control the activity of other genes. Most of these mutations have a dominant-negative effect, which means that the altered protein produced from one copy of the STAT3 gene interferes with the function of the normal protein produced from the other copy of the gene. The lack of STAT3's signalling function disrupts the normal maturation of T cells (specifically a subset known as Th17 cells) and other immune system cells. The resulting immune system abnormalities make people with AD-HIES highly susceptible to infections, particularly bacterial and fungal infections affecting the lungs and skin. A shortage of functioning STAT3 protein prevents cells from reacting to signals that trigger allergic reactions, which explains why people with AD-HIES do not have an increased risk of allergies, despite having high levels of IgE. It is unclear why levels of this protein are elevated in affected individuals.

The role of STAT3 protein in the formation and maintenance of bone tissue may help explain why STAT3 gene mutations lead to the skeletal and dental abnormalities characteristic of this condition, but it is unclear what causes blood vessel abnormalities in AD-HIES.

Large granular lymphocytic (LGL) leukemia is a rare disorder marked by expansion of cytotoxic T lymphocytes, often accompanied by autoimmune disease manifestations. Satu Mustjoki and colleagues have shown that this leukemia subtype frequently harbors somatic activating mutations in STAT3.[4] Vogan, K and colleagues performed exome sequencing on leukemic and non-leukemic cells from a subject with typical T-cell large granular lymphocytic (LGL) leukemia and identified a missense mutation affecting the SH2 domain of STAT3.[5] Targeted sequencing in 76 additional cases identified protein-altering STAT3 mutations in 40% of subjects with LGL leukemia. The altered residues cluster at the dimerization interface of STAT3 and are predicted to result in cytokine-independent signalling activity. Consistent with this, STAT3 mutation–positive leukemic cells showed nuclear localization of STAT3 and upregulation of STAT3 transcriptional targets. Transfected cells expressing mutant STAT3 proteins also had increased expression of a STAT-responsive reporter construct. These findings suggest that a substantial proportion of individuals with LGLleukemia could benefit from treatment with STAT3 inhibitors, which are currently being tested in clinical trials for other hematological disorders.

To Be Continued: Mouse Models of Stat3

Visit the next article below, in which we provide details on the applications of mouse models used for Stat3 gene studies and new research progress.