HNRNPC (Heterogeneous Nuclear Ribonucleoprotein C) is a Protein Coding gene. Diseases associated with HNRNPC include Mixed Connective Tissue Disease (MCTD) and Oculopharyngeal Muscular Dystrophy (OPMD).In this article, we review the hottest oncogene HNRNPC, hoping to give you insights on its role in rare disease development as a therapeutic target in MCTD research.

This gene belongs to the subfamily of ubiquitously expressed heterogeneous nuclear ribonucleoproteins (hnRNPs). The hnRNPs are RNA binding proteins and they complex with heterogeneous nuclear RNA (hnRNA). These proteins are associated with pre-mRNAs in the nucleus and appear to influence pre-mRNA processing and other aspects of mRNA metabolism and transport. While all of the hnRNPs are present in the nucleus, some seem to shuttle between the nucleus and the cytoplasm. The hnRNP proteins have distinct nucleic acid binding properties. The protein encoded by this gene can act as a tetramer and is involved in the assembly of 40S hnRNP particles. Multiple transcript variants encoding at least two different isoforms have been described for this gene.

Function of the HNRNPC Gene

Molecular function : HNRNPC binds pre-mRNA and nucleates the assembly of 40S hnRNP particles. Interacts with poly-U tracts in the 3'-UTR or 5'-UTR of mRNA and modulates the stability and the level of translation of bound mRNA molecules. Single HNRNPC tetramers bind 230-240 nucleotides. Trimers of HNRNPC tetramers bind 700 nucleotides. May play a role in the early steps of spliceosome assembly and pre-mRNA splicing. N6-methyladenosine (m6A) has been shown to alter the local structure in mRNAs and long non-coding RNAs (lncRNAs) via a mechanism named 'm(6)A-switch', facilitating binding of HNRNPC, leading to regulation of mRNA splicing. 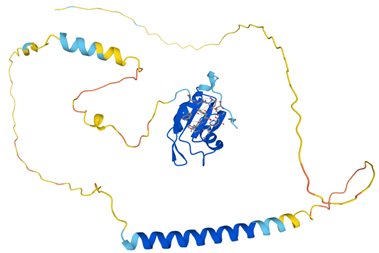 Disorders Related to the HNRNPC Gene

Diseases associated with HNRNPC include Mixed Connective Tissue Disease(MTSD) and Oculopharyngeal Muscular Dystrophy(OPMD). Among its related pathways are mRNA Splicing - Major Pathway and SUMOylation. Gene Ontology (GO) annotations related to this gene include nucleic acid binding and identical protein binding. An important paralog of this gene is HNRNPCL1.

MCTD is a rare autoimmune disorder that is characterized by features commonly seen in three different connective tissue disorders: systemic lupus erythematosus, scleroderma, and polymyositis. Some affected people may also have symptoms of rheumatoid arthritis. Although MCTD can affect people of all ages, it appears to be most common in women under age 30. Signs and symptoms vary but may include Raynaud's phenomenon ; arthritis ; heart, lung and skin abnormalities; kidney disease ; muscle weakness, and dysfunction of the esophagus. The cause of MCTD is currently unknown. Treatment may include medications such as nonsteroidal anti-inflammatory drugs (NSAIDs), corticosteroids and immune-suppressing drugs to help manage symptoms. 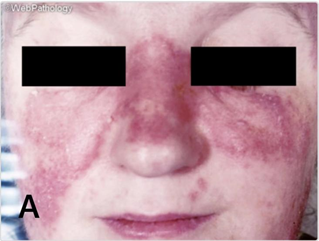 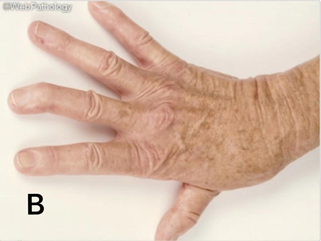 OPMD is a genetic condition characterized by muscle weakness that begins in adulthood, typically after age 40. The term "oculopharyngeal" refers to the eyes (oculo-) and a part of the throat called the pharynx (-pharyngeal). Affected individuals usually first experience weakness of the muscles in both eyelids that causes droopy eyelids (ptosis).

FIG. 3. Photograph of II-5. She is 63 years old, has had gradual progressive ptosis since she was 50, and suffers a facial weakness[1].

Ptosis can worsen over time, causing the eyelid to impair vision, and in some cases, limit eye movement. Along with ptosis, affected individuals develop weakness of the throat muscles that causes difficulty swallowing (dysphagia). Dysphagia begins with dry food, but over time, liquids can also become difficult to swallow. Dysphagia can cause saliva to accumulate and a wet-sounding voice. Many people with oculopharyngeal muscular dystrophy also have weakness and wasting (atrophy) of the tongue. 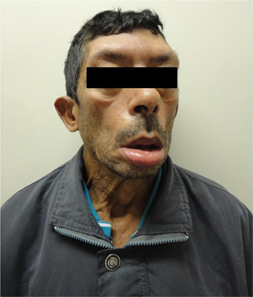 Figure 4 Patient’s front view. At 52 years of age, the patient reported the onset of dysphagia (choking on solid foods, need to clear his throat, and fluid intake after food intake)[2].

These problems with food intake may cause malnutrition, choking, or a bacterial lung infection called aspiration pneumonia.Individuals with oculopharyngeal muscular dystrophy frequently have weakness in the muscles near the center of the body (proximal muscles), particularly muscles in the shoulders, upper legs, and hips (limb-girdle muscles). The weakness slowly gets worse, and people may need the aid of a cane or a walker. Rarely, affected individuals need wheelchair assistance.Rarely, individuals have a severe form of oculopharyngeal muscular dystrophy with muscle weakness that begins before age 45, and have trouble walking independently by age 60. These individuals often also have disturbances in nerve function (neuropathy), a gradual loss of intellectual functioning (cognitive decline), and psychiatric symptoms such as depression or strongly held false beliefs (delusions).

In the next article, we will update you the application of mouse models in HNRNPC gene and new research progress.