In our fourth Gene of the Week article, we continue covering genes related to the development of Alzheimer's disease (AD). Several mutations in APOE (Apolipoprotein E) have been identified to not only increase the risk of developing AD, but other neurological and cardiovascular diseases. As scientists continue to evaluate potential therapies for AD, we hope to provide insights into various genes, related pathways, and research accomplishments in every Gene of the Week article. Herein, we summarize the current research progress on APOE functionality and review its role in Alzheimer's disease (AD).

APOE is polymorphic, with three major alleles among the human population: epsilon 2 (ε2), epsilon 3 (ε3), and epsilon 4 (ε4). These allelic forms differ by 1-2 amino acids at positions 112 and 158, which result in altered APOE structure and function. APOE3 has the highest worldwide allele frequency and is considered the neutral (wild type) APOE genotype. Both APOE2 and APOE4 have unique biological implications and relevance for a range of neurological and cardiovascular diseases. Figure 1. Three isoforms of APOE: APOE2, APOE3 and APOE4. The difference between these three isoforms lies in the changes of two sites at the level of the APOE gene, which translate to the protein level in determining whether these two sites (the 112th amino acid and the 158th amino acid) are cysteine (Cys) or arginine (Arg). APOE2 has both sites on the chromosome encoded as Cys; APOE3 encodes the 112th position as Cys and the 158th position as Arg; APOE4 encodes both sites to be Arg.

APOE is the structural gene for apolipoprotein E (apoE), which is responsible for the transport of chylomicrons. The binding of its specific liver and peripheral cell receptor is essential for the normal catabolism of the lipoprotein component rich in triglycerides. Mutations of APOE can cause familial lipoproteinemia or type III hyperlipoproteinemia (HLP III), while Atherosclerosis and Alzheimer's disease are also closely related to the polymorphism of this gene. Figure 2. The distribution of APOE polymorphisms among populations (Male & Female). APOE3/E3 accounted for the highest proportion – nearly 2/3 of the total population. 25% of the population carries at least one APOE4, 10% carry APOE2/E3, and the remaining 1% carry APOE2/E2. 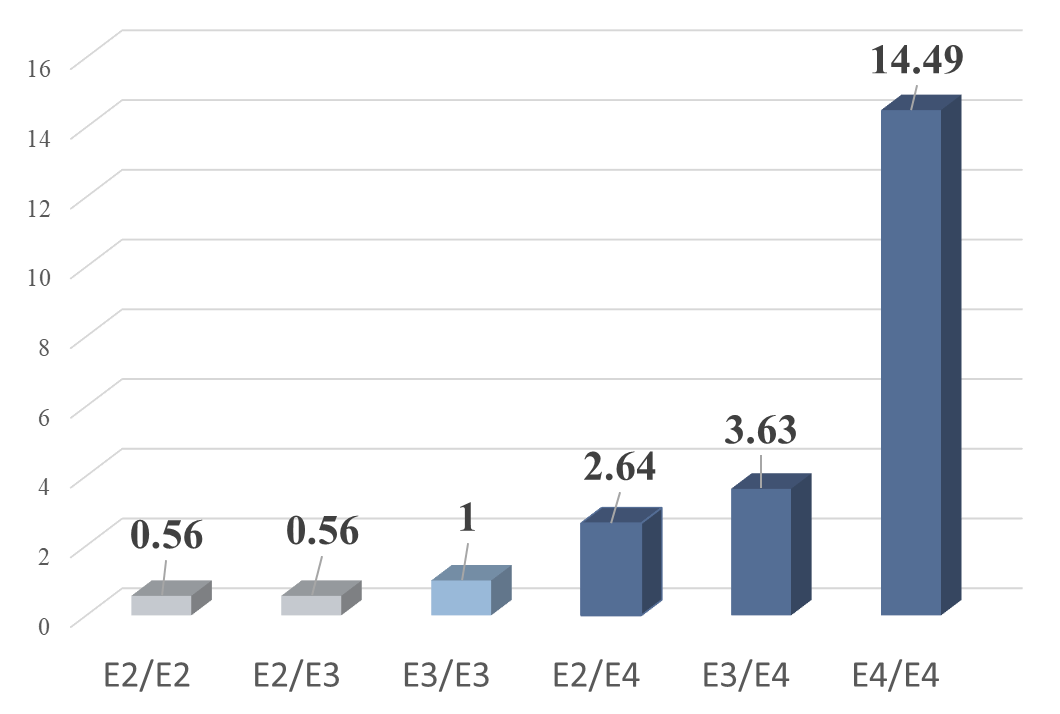 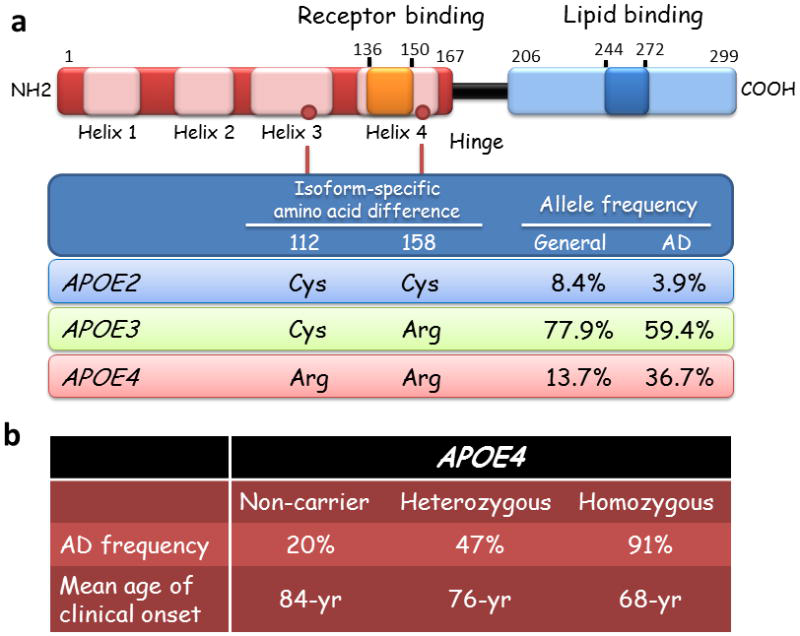 Figure 5. APOE ε4 is a major genetic risk factor for Alzheimer disease. (a) The ApoE2, E3, and E4 isoforms, which are encoded by the ε2, ε3 and ε4 alleles of the APOE gene, respectively, differ from one another at amino acid residues 112 and/or 158 (red circles). ApoE has two structural domains: the N-terminal domain, which contains the receptor-binding region (residues 136–150), and the C-terminal domain, which contains the lipid-binding region (residues 244–272); the two domains are joined by a hinge region. A meta-analysis demonstrated a significant association between the ε4 allele of APOE and AD. (b) APOE ε4 increases the risk of AD and lowers the age of disease onset in a gene-dose-dependent manner.4 Figure 6. Expression of Human and mouse APOE gene mRNA (relative expression values). The liver is the organ with the highest expression level of APOE mRNA across both species. APOE mRNA is also highly expressed in the kidneys, adrenal glands, brain, and spleen. However, the expression of ovaries and placenta in humans and mice are completely different. (The comparison above is within the same species, there is no comparison between mice and humans.) Data source: NCBI.

Three major isoforms of APOE - E2, E3, and E4 – within the human population have been studied for their implication in the development of disease. Compared with the common APOE3 polymorphism, both the APOE2 and APOE4 have unique biological relevance for a range of neurological and cardiovascular diseases. These isoforms differ in amino acids at positions 112 and/or 158, which result in altered APOE structure and function.

Data has shown an increased incidence of Alzheimer's disease (AD) for populations carrying at least one APOE4 allele, with E4/E4 homozygous populations having nearly 14.5 times the AD incidence of the baseline E3/E3 population. While APOE2 may reduce the incidence of AD, this polymorphism may have relevance to other diseases. APOE ε4 increases the risk of AD and lowers the age of disease onset in a gene-dose-dependent manner. Even though the APOE4 variant is the largest genetic risk factor for late-onset sporadic AD, it is not a determinant of the disease.

There is much to be learned about these APOE isoforms, especially for how they influence cognition and the development of Alzheimer's disease (AD). The APOE polymorphisms are implicated in a variety of neurological and cardiovascular diseases, and ongoing research continues to elucidate their specific interaction pathways.