Spinal muscular atrophy (SMA) is a genetic disease that involves the loss of motor neurons in the spinal cord, which affects the central nervous system, peripheral nervous system, and voluntary muscle movement. The primary pathogenic gene of spinal muscular atrophy is the survival of motor neuron 1 (SMN1) gene, mutations of which cause a deficiency of SMN motor neuron protein – ultimately resulting in Chromosome 5 SMA, the most common form of SMA.

In this article, we review the functionality of SMN1 and explore its role in targeted gene therapy for spinal muscular atrophy, presenting brief insights on SMN1 gene research.

Survival motor neuron gene 1 (SMN1) and the encoded SMN1 protein are involved in the pathology of spinal muscular atrophy (SMA), which is the leading genetic cause of mortality in infants. The single copy inactivation (asymptomatic) phenomenon of SMN1 varies in different populations, being as high as ~1/50 in the Asian population, with an estimated incidence of 1/10000 live births overall. The SMN1 protein plays a catalytic role in the assembly of small nuclear ribonucleoproteins (snRNPs), essential components of spliceosome complexes. Spliceosomes remove introns from pre-mRNA, a process known as splicing. Therefore, SMN1 plays both an important role in the splicing of pre-mRNA and is indispensable in maintaining the survival of motor neurons.

Figure 1: SMN1 Structure and Function. The figure shows the linearized structural regions of mature mRNA transcript and protein from human SMN1. Arrows indicate the locations of the start and stop codons. Exon regions are separated into boxes, with the number of amino acids noted in each. Different functional regions of the gene are annotated.1 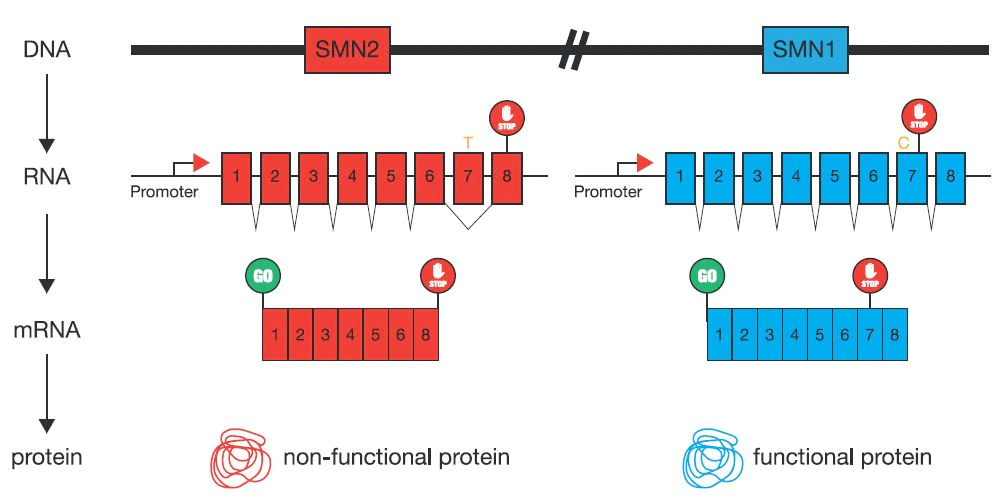 Based on the pathogenesis of SMA described above, there are two different therapeutic approaches that researchers have been focused on. The first approach is directly introducing the normal encoding SMN1 gene through vector, which is the treatment adopted by the FDA-approved drug, zolgensma (strategy shown on the left side of Figure 3). This method has become the third adeno-associated virus (AAV)-mediated gene therapy treatment available on the market. The second strategy is to promote the normal expression of SMN2 that still exists in the patient’s body by inhibiting the incorrect splicing of exon 7 with antisense nucleotides. Gene therapy has brought hope to SMA patients for its potential to eventually cure the disease. 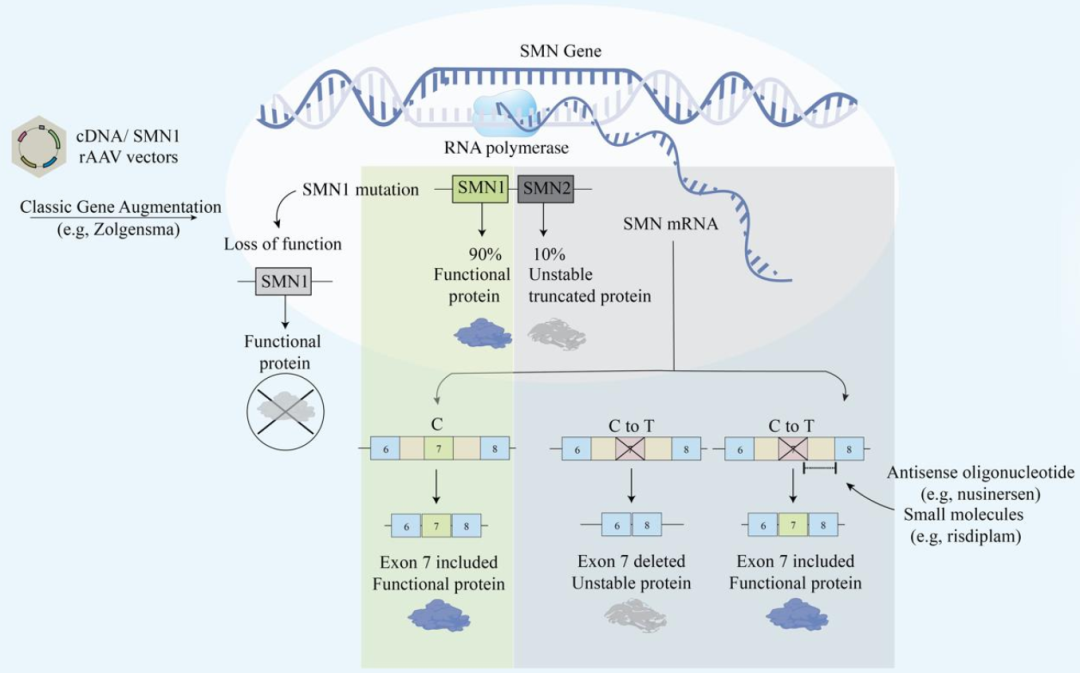 In recent decades, gene therapy has made significant progress in the treatment of genetic diseases. In practice, scientists apply genomic and proteomic methods to identify the disease-causing gene, subsequently verifying the target gene with in vitro and in vivo experiments. With this methodology, scientists have published many high-impact gene therapy research articles and developed treatments for diseases that previously lacked effective therapeutic options.

With more than 15 years’ experience in genetic engineering, Cyagen has delivered hundreds of custom animal models and virus packaging services to researchers for gene therapy applications. By the end of 2020, Cyagen’s products and services have been cited in over 4,750 publications across highly reputed peer-reviewed journals such as Nature, Cell, Science, and more. With our expertise in gene therapy, Cyagen provides guaranteed genetically engineered animal models and virus packaging services for gene therapy research. The use of such models is known to improve clinical transformation of gene therapy.

If you have questions about choosing the right animal models for gene therapy research, contact us for complimentary support, consultations, and project strategy design.