Animal behavioral tests are important tools used in neuroscience research to evaluate behavioral phenotypes and establish rodent models of neuropsychiatric indications. Researchers are able to explore complex phenomena of life through a variety of behavioral assessments, including: the comprehensive evaluation of animal models' learning and memory, psychology, motor coordination, social behavior, and other phenotypic aspects of neurological disorders.

Rats and mice are the most commonly used animal models in neurobehavioral research due to their high degree of genetic homology with humans and wide variety of established disease models. After years of preparation, Cyagen's senior expert team has developed a rat and mouse neurobehavioral assessment platform. Cyagen offers rat and mouse behavioral assessment services using professional recording and analysis systems, including: water maze, novel object recognition test (NORT), Y maze, rotarod, open field test (OFT), forced swimming test (FST), elevated plus maze (EPM), and other types of rodent behavioral assessments. You can choose to use our behavioral platform to accelerate the phenotype evaluation process and conduct experiments on your own, or you can entrust Cyagen to provide one-stop services for your research model project. Our comprehensive services cover the entire process of model generation, from transgenic/gene targeting strategy design, model development, breeding, behavioral testing, phenotype assessments, evaluating surgery/drug treatment, and pathological marker detection; we have cultivated these capabilities to help you complete your research goals in a shorter time. Request a free consultation by contacting us at 800-921-8930, or email animal-service@cyagen.com. 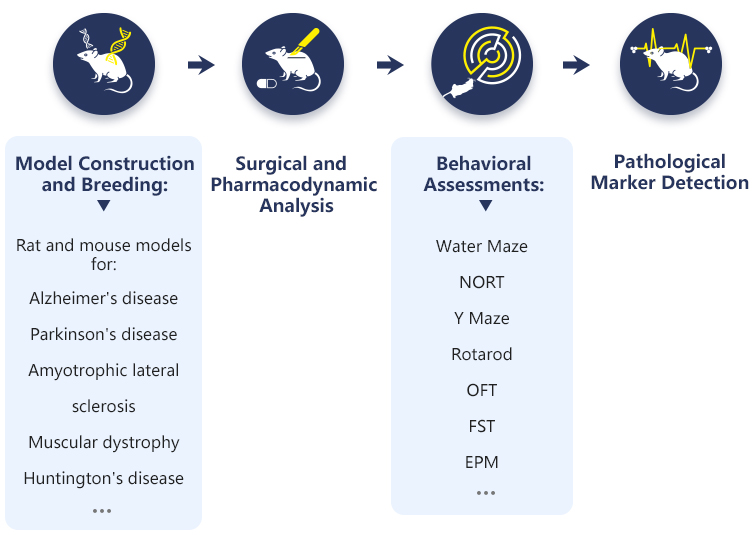 Cyagen’s rodent neurobehavioral platform can provide multiple types of rat and mouse behavioral tests. Combined with our expertise in custom rat and mouse model development and breeding, we can help you complete your research project tasks in a shorter timeline. Our one-stop solutions provide you with comprehensive neuroscience research solutions, from model development, breeding, behavioral testing, phenotype assessments, evaluating surgery/drug treatments, and pathological marker detection. Cyagen can undertake all phases of your rodent model research project with our expert capabilities across model construction, breeding, behavioral analysis, phenotypic evaluations, and more.
Cyagen’s rat and mouse neurobehavioral platform has spaces available for rodent behavioral assessments, behavioral testing equipment, and professional recording and analysis systems, which can provide water maze, NORT, Y maze, rotarod, OFT, FST, EPM and other types of rat and mouse behavioral testing services. You can entrust Cyagen’s biotechnologists to conduct behavioral experiments, or you can choose to get our support for model development and conduct behavioral experiments on your own, talking to our custom animal model experts face to face as part of our high-quality technical support.
Inquire Now
Neurobehavioral Platform Services
for Rat and Mouse Projects
Research Classification
Research Classification
Learning and Memory 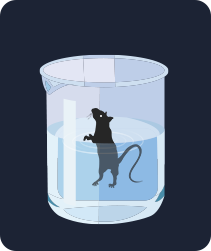 The forced swimming test (FST) provides an unavoidable oppressive environment by placing animals in a confined environment (such as water) in which they struggle desperately to escape, but cannot. After a period of time, the animal shows a typical "immobility state", and a series of parameters in the process of the animal producing a hopeless immobility state are observed and recorded, which can be used to evaluate the effect of depressants and antidepressants.
Applicable Fields
FST plays a crucial role in the research and development of antidepressants and their evaluation in animal models of depression. The FST is fast and simple, it is a highly reliable method which is widely used in the screening and evaluation of antidepressants.
Brief Introduction
The elevated plus maze (EPM) is used to examine anxiety-related behaviors in rodents based on their natural affinity for spontaneous exploration of new environments and aversion for open and elevated areas leading to conflicting behaviors. The EPM has a pair of open arms and a pair of closed arms that are elevated off the ground (equivalent to a person standing on a cliff) which makes the experimental subjects feel fear and anxiety. The EPM is widely used in the development of related new drugs.
Applicable Fields
The EPM is a classic behavioral test for disease research and is widely used in the development of new drugs, as well as in computer-assisted pharmacology, toxicology, preventive medicine, neurobiology, animal psychology, etc. It is an important tool for medical schools and research institutions to develop treatments for anxiety and depression.
Brief Introduction
The tail suspension test (TST) is a classic and rapid method for evaluating the efficacy of antidepressants, stimulants, and sedatives. The principle is to suspend the mouse by the tail in a manner that it may try to escape but is unable to, so as to give up the struggle and enter a unique state of depression and immobility. During the experiment, the immobile time of the mice was recorded to reflect the depressive state, and antidepressant and stimulant drugs could significantly shorten and change their state.
Applicable Fields
The TST is a classic and rapid method for evaluating the efficacy of antidepressants, stimulants, and sedatives.
Brief Introduction
The hot plate test is one of many tests used to assess nociception. The test can be performed at a constant temperature or with an elevated temperature of the heating plate. The hot plate test is a simple experiment used to study the effect and effectiveness of analgesics on pain responses.
Applicable Fields
The hot plate test is a simple method for assessing heat pain response and assessing the effectiveness of analgesics.
Three-Chamber (TC)
Brief Introduction
The three-chamber (TC) social test mainly assesses the social novelty preferences and sociablility of mice through analysis. The principle is based on the characteristics of mice's tendency to explore new objects, and the social behavior of mice can be reflected by the activity level of mice in each area of the TC.
Applicable Fields
The TC social behavior experiment for mice is used as a behavioral evaluation platform for autism. The software calculates the time when the tested mice are close to a wire cage, the number of contacts and other indicators to evaluate the social behavior of the animals.
Service Advantages of Rat and Mouse
Neurobehavioral Platform 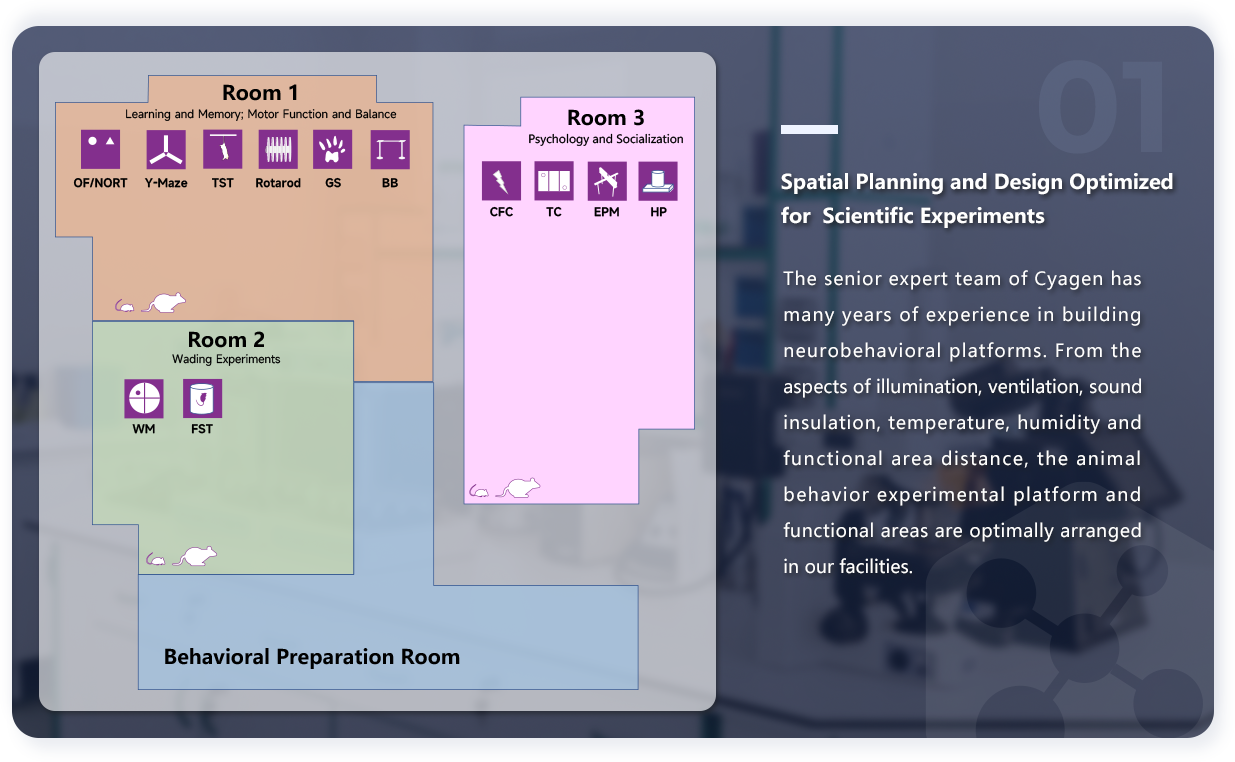 Cyagen’s rat and mouse neurobehavioral platform is equipped with exclusive water maze, Y maze, rotarod, open field, elevated plus maze and other types of experimental instruments and equipment, which can carry out tests of learning and memory, motor function/balance, psychological and social behaviors of rodent models.

Cyagen's rat and mouse neurobehavioral platform is equipped with convenient behavioral observation and recording analysis software. Our software uses powerful animal identification and tracking capabilities in order to comprehensively and accurately reflect the behavioral status of rats and mice, which can help you save valuable research time, even enabling you to analyze multiple data streams simultaneously.

Comprehensive Guidance from a Team of Senior Technical Experts