ROSA26: The ‘Safe Harbor’ Locus in the Mouse Genome

What is the first thing that comes to your mind when we mention ‘safe harbor’? The ‘safe harbor’ we want to talk about today is not the kind for ships, but, rather, the safe locus for targeted integration of exogenous gene in the mouse genome. Let's explore one of the most well-established safe loci in the mouse genome - ROSA26.

The Disadvantages of Random Integration

When using cell lines or model organisms to study gene function, we usually use a strategy called gain of function / loss of function to learn the specific functionality and regulatory mechanisms of target gene(s) in cells or animals. Gain of function is usually achieved by gene knockin (KI) techniques to promote over-expression of gene, while loss of function is usually achieved via gene knockout (KO). In this paper, we mainly discuss the KI, or over-expression model. Gene knockin (KI) refers to the technology of inserting exogenous functional genes or fragments into the genome by transgenic or homologous recombination technique, enabling their ability to function in the cell.

Due to the random integration of transferred genes in mice prepared by traditional transgenic technology, this leads to problems such as an uncertain copy number across integration sites, making it is necessary to screen the offspring for mice with stable protein expression. In addition, the phenotype of the first-generation-mice is easily to lost during passage due to reasons such as the dilution of copy number and the silencing of surrounding genes caused by the integration site – posing a significant inconvenience to the subsequent establishment of lines and repeated experiments.

Is there a site that allows for the stable, high-expression of a transferred gene and avoids affecting the expression of other genes nearby? To obtain mice with stable gene expression without screening, it is necessary to provide a reliable ‘safe harbor’ for the exogenous gene. Within these ‘safe harbors’, the exogenous gene(s) are stably and efficiently expressed, and cause no side effects on regular functionality of associated cells and tissues.

The Discovery of ROSA26

Researchers have tested numerous different gene insertion sites in the mouse genome and found a few special sites wherein it is very safe and stable to insert any DNA – the ROSA26 ‘safe harbor’ locus is included among these special sites. The identification of ROSA26 is probably one of the most exciting discoveries in the history of genetic engineering, and is regarded as one of the most important breakthroughs in the whole history of genetics.

ROSA26 was first discovered by Friedrich and Soriano when they studied gene mutations in mouse embryonic stem cells (ESCs). The ROSA26 locus is known in the scientific community by the official name: gene trap ROSA 26 [Gt(ROSA)26Sor]. ROSA26 is a non-coding gene composed of three exons on mouse chromosome-6, a region where it is easy to insert genes. There are no known functional proteins encoded by the ROSA26 gene. Additionally, the ROSA26 locus makes it easy to perform homologous recombination (HR), maintains expression levels of the protein from gene constructs inserted into this region, and does not affect the expression or function of other endogenous genes. Given its wide expression across all cell types and developmental stages, the ROSA26 region is often used as a safe site for gene targeting in mouse models.

In general, there are three different types of ROSA26 locus knockin (KI): 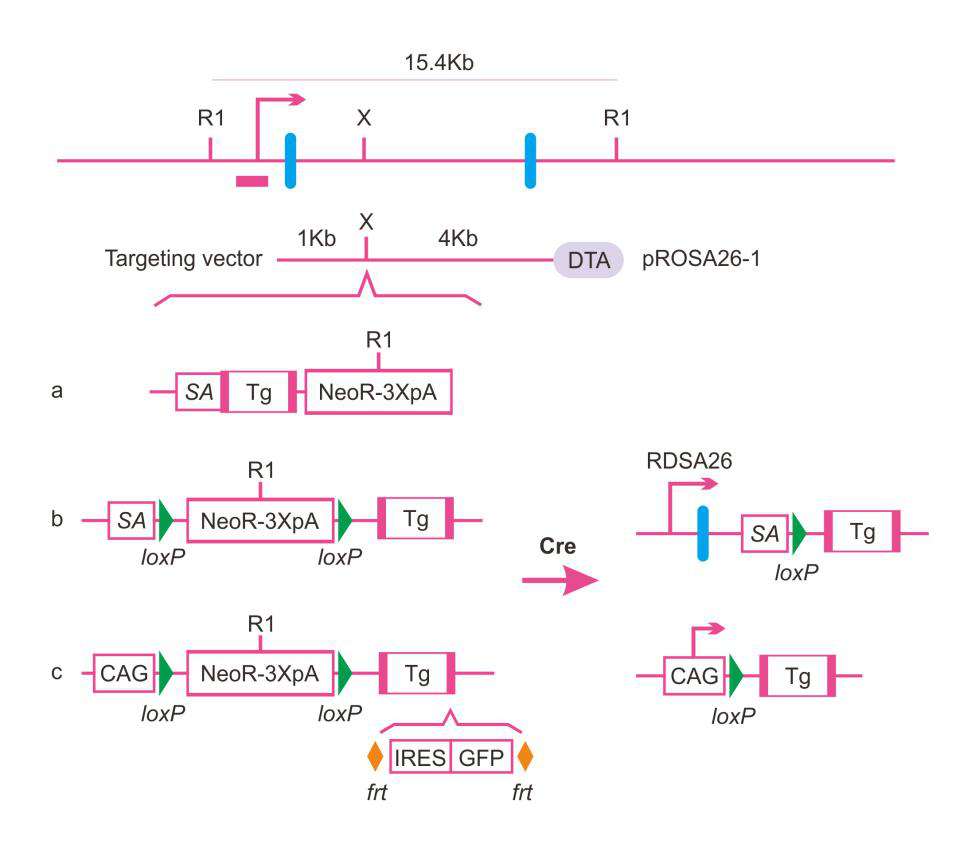 The Applications of ROSA26

The ROSA26 locus is often referred to as a "safe harbor" locus, and has been extensively used as a transgene insertion site due to the lack of insertion site side effects and the stable ubiquitous expression of genes inserted here. Targeting the ROSA26 site provides high-accuracy insertion and stable single-copy gene expression, making it an ideal integration site. When combined with Cre-lox system, both temporal and cell-specific control of gene expression can be realized. More importantly, as a targeted gene knockin strategy, the overall number of mice needed is less than BAC transgenic and PiggyBac transgenic, which greatly improves the work efficiency and reduces the production cost. At present, the models constructed with ROSA26 have been widely used in researching gene function, mechanisms of organism development, and new drugs.

At present, Cyagen has established thousands of gene knockin mouse models by targeting the ROSA26 locus. In addition to mice, Cyagen also provides custom ROSA26 targeted gene modification services in both rats and embryonic stem cells (ESCs). These models are widely used in studies of gene function, disease diagnosis and treatment, stem cells, RNAi, and many other fields. Targeted modification of ROSA26 in mice, rats and embryonic stem cells (ESCs) solves many of the problems caused by conventional transgenic modification, providing an effective strategy for the stable expression of exogenous genes and consistent phenotype – significantly improving the potential for research applications of transgenic animal models.

Contact Us for a free consultation and strategy design for your model generation project.