CRISPR-Cas9 is the most popular gene-editing technology in life science research. Despite its advantage of the simplicity of operation, many researchers still have misunderstandings about this gene-editing technology. For example, when using the CRISPR-Cas9 strategy in the construction of gene knockout (KO) cell lines, researchers might be troubled about choosing the specific model generation method from plasmid-based, viral delivery, and ribonucleoprotein (RNP) transfection.

With the high cutting efficiency and knockout success rate demonstrated early on, CRISPR-Cas9 quickly attracted the attention of researchers worldwide. However,  researchers also encountered difficulties in conducting related experiments, as they found that the success rate of gene knockout was not as high as expected, and there was still the problem of low transfection efficiency for cells. Thus, some research groups have attempted a gene knockout via lentivirus transfection to improve the transfection efficiency - integrating the Cas9 protein gene into the genome and improve the cell knockout efficiency by increasing the action time of Cas9 protein and sgRNA.

There are two key problems in lentivirus transfection:

1. Transfection of Cas9 by the lentivirus method will introduce new genes while knocking out the target genes. The foreign genes transfected by lentivirus are randomly integrated, which has the risk of affecting the expression of other genes.

2. There is an off-target effect in the CRISPR-Cas9 editing process. The lentivirus transfection method will continue to express Cas9 protein, and the long-standing Cas9 protein will have a cumulative effect on this off-target effect, which will eventually affect the precision and rigor of the experiment. 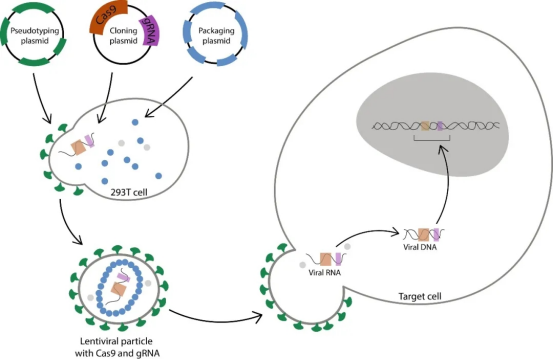 In order to reduce the off-target effect from long-standing Cas9, the plasmid-based strategy may be adopted to reduce the survival time of Cas9 protein and sgRNA complex in cells. Thus, we can construct knockout (KO) cells by the plasmid-based method, in which Cas9 and sgRNA expression vectors (on a plasmid) are transiently transfected into target cells to express Cas9 protein and gRNA in them. Due to the extremely low probability of plasmid integration into the genome along with the gradual disappearance of plasmid vectors in cell passage, the occurrence of off-target effect is reduced. Ultimately, homozygous knockout cells are screened through PCR verification and sequencing. However, the plasmid method does come with the problem of low transfection efficiency.

Unlike the plasmid method, the ribonucleoprotein (RNP) method directly transfects Cas9 protein and sgRNA complex into cells by electrical stimulation-based transfection, also known as electroporation. Because Cas9 protein is uncharged and sgRNA is charged, Cas9 and sgRNA can be transfected into cells more efficiently only when Cas9 binds to sgRNA. At the same time, the survival time of the Cas9-sgRNA complex in cells will not be very long because Cas9 and sgRNA will be degraded, so the probability of off-target effect is very low, but the corresponding cutting efficiency may also be reduced.

As the publications show, the plasmid-based and RNP methods are the current mainstream gene knockout transfection strategies. For many research groups, the plasmid method may be easier to implement; while for biotechnology enterprises, the RNP method has higher experimental efficiency. However, each of the methods has unique pros and cons depending upon the experimental plan. The best transfection method should be decided based on the systematic analysis of the target genes and cells to achieve the desired gene knockout (KO).

How can Cyagen Help You with Gene Knockout Cell Lines?

We can perform a variety of knockout (KO) strategies to generate a custom cell line model, including frameshift mutation, large fragment knockout, and multiple genes knockout. We will adopt the best knockout strategy to greatly improve the success rate of target gene knockout and the expression efficiency according to each project's unique requirements.