Custom Models
Testimonials
"I've been very happy with Cyagen's service so I've been referring a lot of colleagues... thanks for the great service."
'- Washington University in St. Louis
> more
Citations
Identification of Natural Regulatory T Cell Epitopes Reveals Convergence on a Dominant Autoantigen.
IMMUNITY 47:107 (2017) IF=22.845
> more
You may also interested in

>> Request a Quote or Information
Our Experts will contact you providing a quote,
information and estimated timeframe to
your project needs.

Cyagen provides various in vitro cell function testing services, including transwell invasion, cell migration, cell cycle, cell proliferation, cell apoptosis, and other cell detection assays that can be realized by the flow cytometry platform. We assure the standardization, accuracy, and reliability across the entire process, from strategy design through sample preparation and data analysis.

The MTT assay is a colorimetric assay for assessing cell survival and growth. The detection principle is that the succinate dehydrogenase in the mitochondria of active cells can reduce the exogenous MTT into the water-insoluble purple formazan crystals (Formazan) and deposit it in the cells, while dead cells have no such function. Generally, the formazan crystals are dissolved in dimethyl sulfoxide (DMSO) and its light absorption value can be measured at wavelengths of 540 or 720 nm by an ELISA (enzyme-linked immunosorbent assay) reader. The value can indirectly reflect the number of living cells. Within a certain range of cell numbers, the amount of MTT crystal formed is proportional to the number of cells. Hence, this method has been widely used in detection of biologically active factors, large-scale anti-tumor drug screening, cytotoxicity and tumor radiosensitivity testing.

The Cell Counting Kit-8 (CCK-8) kit enables assays using WST-8 (chemical name: 2-(2-Methoxy-4-nitrophenyl)-3-(4-nitrophenyl)-5-(2,4-disulfophenyl)-2H-tetrazolium sodium salt). CCK-8 is widely used in rapid and highly sensitive detection kits for cell proliferation and cytotoxicity. The detection principle is based on how the dehydrogenase in the mitochondria can reduce the WST-8 into the water-insoluble yellow formazan products in the presence of electron-coupling reagents. Generally, the color density is proportional to cell proliferation, and inversely proportional to cell cytotoxicity. The OD value measured by microplate spectrophotometer at 450 nm wavelength can indirectly reflect the number of living cells. Hence, this method has been widely used in the activity detection of high-throughput drug screening, cell proliferation and cytotoxicity, tumor radiosensitivity and for some biologically active factors.

The cell cycle is the active process of a cell from the end of previous division to the end of the next division, which is composed of G0/G1 phase, S phase, G2, and M phases.

The propidium iodide (PI) method is a more common method of cell cycle period detection. PI is an intercalating nucleic acid fluorescent dye, which can bind to the nucleic acids of DNA by intercalating between base pairs. The amount of binding is proportional to the content of DNA. Using flow cytometry analysis, the status of DNA distribution for each phase of the cell cycle can be obtained, and the proportion of cells at each phase can be calculated. After PI staining, assuming that the fluorescence intensity of cells in G0/G1 phase is 1, then the theoretical value of fluorescence intensity of cells in G2/M phase - containing double genomic DNA - is 2 and the fluorescence intensity of cells in S phase that undergoing DNA replication is between 1-2. From this, we can get the distribution status of cells at various stages with exact percentages (G0/G1%, S%, G2/M%), and understand the proliferation ability. In tumor pathology research, the ratio of cells in S phase is usually used as an indicator to access tumor proliferation status.

The in vitro wound/scratch assay is a convenient and economical method for studying cell migration/tumor invasion. The experimental principal is to allow cells to grow to a single layer of fusion, then artificially create a blank area (also called a "wound") on these cells. The cells on the edge of the space will gradually enter the blank area to close the wound.

Compared to other methods, the in vitro wound/scratch assay simulates the process of in vivo cell migration to a degree, and is the simplest among in vitro testing methods for studying cell migration. 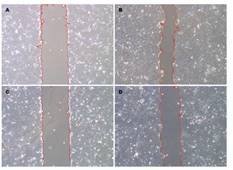 Transwell invasion is a commonly used testing method for cell migration. Cell migration is also called cell crawling, cell movement, or cell motility. It refers to the movement of cells after receiving a migration signal or sensing the gradient of certain substances. Cell migration is one of the basic functions of normal cells, the physiological process of normal growth and development of the body, and a form of movement common in living cells.

Cyagen can perform clone formation rate experiments based on your needs. 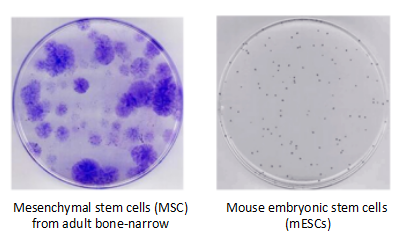 The cell growth curve is a common method to assess cell growth (absolute cell number) and is an important indicator of cell viability. In general, as they are passaged, cells adhere to the wall after a short suspension which is followed with an incubation period, an exponential growth phase that features many divisions. In order to accurately describe the dynamic change of the cell number during the whole process, a typical growth curve is composed of four distinct phases: the lag phase (latent period of slow growth), the exponential or log phase (period with a large slope), the stationary phase (a period the plateaued growth), and the death phase (a period with cell degeneration and decline). 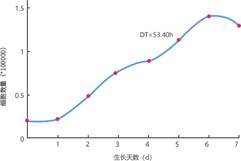 Cell apoptosis, a kind of programmed cell death actively performed by cells, is one of the basic characteristics of cells. Apoptosis maintains the stability of the internal environment and plays an important role during embryonic development and tissue repair. In normal cells, the distribution of phosphatidylserine (PS) is distributed along the inner leaflet of the cell membrane bilayer. In the early stages of apoptosis, the phosphatidylserine (PS) in the cell membrane turns from the inside of the lipid membrane to the outer leaflet – where it acts as an ‘eat me’ signal for phagocytes.