Population aging is one of the most important social health issues in the world today and will only increase in the future. With rising life expectancy and continually low fertility rate in developed economies, it is estimated that the number of people aged 65 years or over will be 2.1 billion by 2050 - reaching as many as 3.1 billion by 2100.

This article aims to introduce the classic experimental methods used to study common neurodegenerative diseases as well as the respective animal disease models which are advancing research. 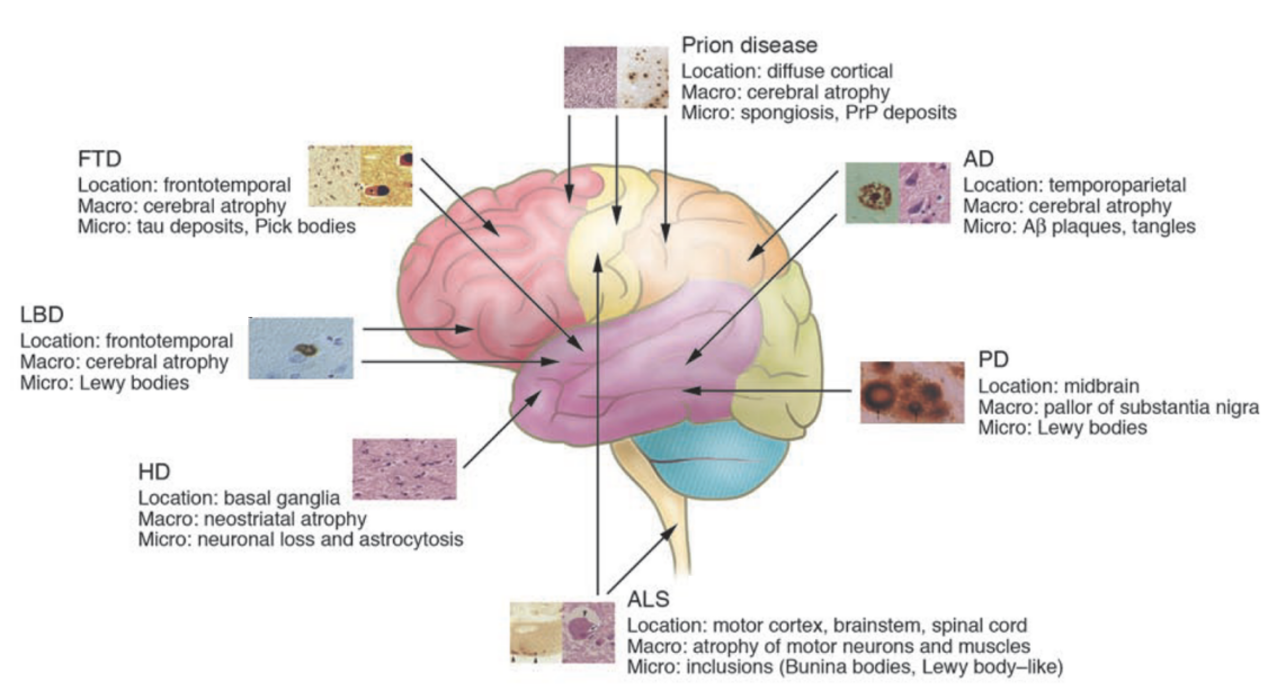 As shown in Fig. 3 below, the incidence rate of Alzheimer’s Disease (AD) is about 1,200 cases per 100,000 people – making AD the most common neurodegenerative disease. For seniors over 65 years of age, the occurrence of AD will exceed 10%. Parkinson’s Disease (PD) has the second highest incidence, about 0.3% within the entire age group, which is followed by Frontotemporal Dementia (FTD), Huntington’s Disease (HD), and amyotrophic lateral sclerosis (ALS) - which cannot be ignored despite seemingly small proportions.

There is no obvious gender difference in the incidence of HD and FTD, although other neurodegenerative diseases may be sex-linked. PD and ALS are more common in males, with an incidence rate almost twice that of female patients. On the contrary, the incidence of AD in female patients is about 1.4 times that of males. From the genetic perspective, HD is inherited in an autosomal dominant manner, while most other common neurodegenerative diseases - such as AD and PD - occur sporadically. 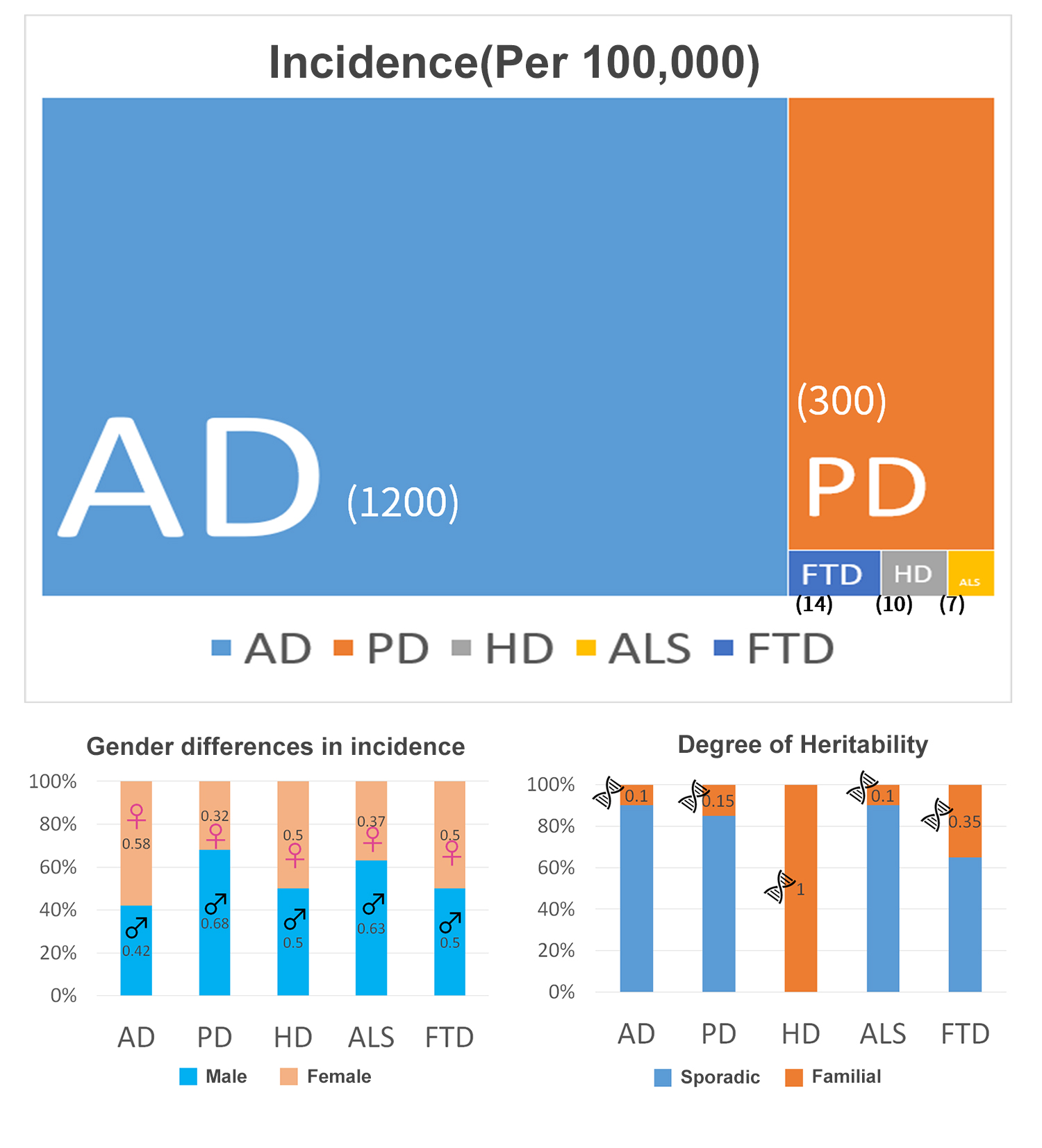 Animal models are excellent research tools for studying pathogenesis and discovering therapies for all types of neurodegenerative diseases.

Alzheimer’s Disease (AD): Most AD models are made via gene editing of Aβ precursors, splicing enzyme (PS1/2) and tau. Some models are acutely generated by injection of the above two toxic proteins into brain. Despite the relation of APOE with AD, APOE alone cannot be used as a model of AD – it requires hybridization with traditional AD models for research. Similar to this, there are additional immune-related genetically modified animal models which cannot be independently used as AD animal models, such as TREM2. Although BACE1 is also involved in the formation of Aβ, there are no reports of related mutations in humans that cause AD.

Parkinson’s Disease (PD): As the main component of Lewy bodies in neurons, α-Synuclein is the primary gene target for developing models of PD. However, unlike the dominant role of APP and its splicing enzyme genes in AD research, genes such as PINK1, Parkin, LRRK2 and DJ-1 also account for a large proportion of familial PD research. These genes play a role in inhibiting the aggregation of α-Synuclein and promoting its degradation. In general, the phenotype of gene edited models of PD is not as obvious as the phenotype of AD models. Therefore, drugs such as MPTP, Roteona, and 6-OHDA are often used to establish PD models.

Huntington’s Disease (HD): Among neurodegenerative diseases, HD is the simplest for modeling. Since this disease is caused by excessive CAG repeats in the Htt protein, the gene modification of all HD models is made to Htt. The models of HD targeting Htt only differ in terms of the gene editing method and number of CAG repeats.

Amyotrophic Lateral Sclerosis (ALS) : ALS involves numerous different genes – these pathogenic genes are located across both autosomes and sex chromosomes, some are dominant pathogenic genes while others are recessive - making the models of ALS very diverse. The earliest identified pathogenic gene of ALS was SOD1. Over the last decade, more studies have been conducted on TDP-43C, which forms protein aggregates, and C9ORF72, which is most commonly found in sporadic ALS.

Frontotemporal Dementia (FTD)：FTD shares similarities with other neurodegenerative disorders: it has the same aggregation of tau as in AD and is also related to TDP-43, the characteristic protein of ALS. However, FTD is most closely related to ALS. There are many protein mutations that are both the cause of ALS and also induce FTD. Interestingly, despite the similarities between the pathogenic genes in these two diseases, ALS mainly impairs motor ability, while FTD mainly impairs cognitive function.

Due to ethical considerations, it is difficult to conduct research on neurodegenerative diseases using human tissue samples. Therefore, animal disease models - including macaques, marmosets, rats, mice, zebrafish, drosophila, and nematodes - have been developed to study neurodegenerative diseases. Although primates share the most genetic and physical similarities with humans and are theoretically the most ideal models for medical research, their use is limited due to high costs, long experimental cycle, and difficulty of gene editing. Alternatively, zebrafish and drosophila are more suitable for high-throughput research, due to their fast reproduction and relatively low experimental costs. However, many phenotypic studies related to cognitive function cannot be carried out because the nervous systems of these organisms are too simple. In general, rodents are the most suitable animal model for neurodegenerative diseases research as they share over 90% genes with humans, and their experimental cycle is much shorter than that of primates. It is important to consider that many human cognitive processes can be replicated in rodent models and large amounts of research data are available for reference.

With the rapid development of various nuclease-based genome editing technologies between 2009 and 2013 – including the significant CRISPR/Cas9 technology – and their continuous improvement thereafter, the efficiency of gene editing has been greatly improved as the difficulty and cost have been significantly reduced. CRISPR/Cas9 gene editing has come to play an important role in the study of neurodegenerative diseases. In the history of gene editing, transgenic technology was the first method developed and has subsequently become the gene manipulation technique with the most disease models. However, traditional pronuclear injection (PNI) transgenics presents some disadvantages, such as: integration of multiple transgene copies, multiple insertion sites, and tandem integration causing overexpression or silencing of genes. To improve control of gene expression without affecting the expression of other genes due to random insertion, the PNI transgenic approach is gradually giving ways to other gene modification methods.

Contrary to the transgenic overexpression method that increases gene expression, researchers sometimes need to reduce or eliminate gene expression, which led to the development of gene knockout technology. Used to silence gene expression, the gene knockout method involves completely removing functionality of the gene product by either direct knockout of the entire gene or exon, or introducing a frameshift mutation that translates to a completely different protein (due to the reading frame). It has been reported that up to 30% of the genes in mice will result in developmental lethality if completely knocked out. In such a case, studies would be limited to the gene’s role in embryonic development. To circumvent the problem of developmental lethality, Cre-loxP technology was developed for tissue-specific and/or temporal control of gene deletion. This method can determine the precise expression time and site of Cre splicing enzyme based on the promoter connected with Cre - so long as the loxP sites are properly situated on both sides of the target gene to be knocked out.

The Cre-LoxP method can be used to perform a gene knockin with similar improvements. The fragment - containing the LoxP terminator sequence and exogenous gene - is inserted into the mouse genome. The exogenous target gene can only be expressed with crossbreeding with Cre mice, after the terminator sequence is knocked out.

To facilitate future applications in human medicine, chimeric mice have been produced based on the above-mentioned gene editing methods. These chimeric mice can have cells from other mouse strains, or contain both human and mouse cells. However, there are ethical concerns when human cells are used in this manner.

Humanized mouse models, in which human genes are introduced into mice, are the most popular modeling method for present-day researchers. The knockin method can be customized based on research needs, with options to replace the original genes, include/exclude introns, and much more.

Compared with psychiatric disorders - such as autism, schizophrenia and others - for which symptoms appear during adolescence through adulthood, neurodegenerative diseases have a later onset, and most symptoms appear after the age of 50. Among the most well-known neurodegenerative diseases, Huntington's disease (HD) and multiple sclerosis (MS) have an earlier onset, which influences the corresponding experimental window. However, the current gene editing may significantly advance the onset time of the mouse disease model, making the model less correlated to the onset of human disease. Therefore, the experimental findings in mice should be treated with caution and cannot be completely copied to human experiments. Nevertheless, mice share a lot in common with humans, and mouse models remain indispensable tools for human neurodegenerative disease research efforts. 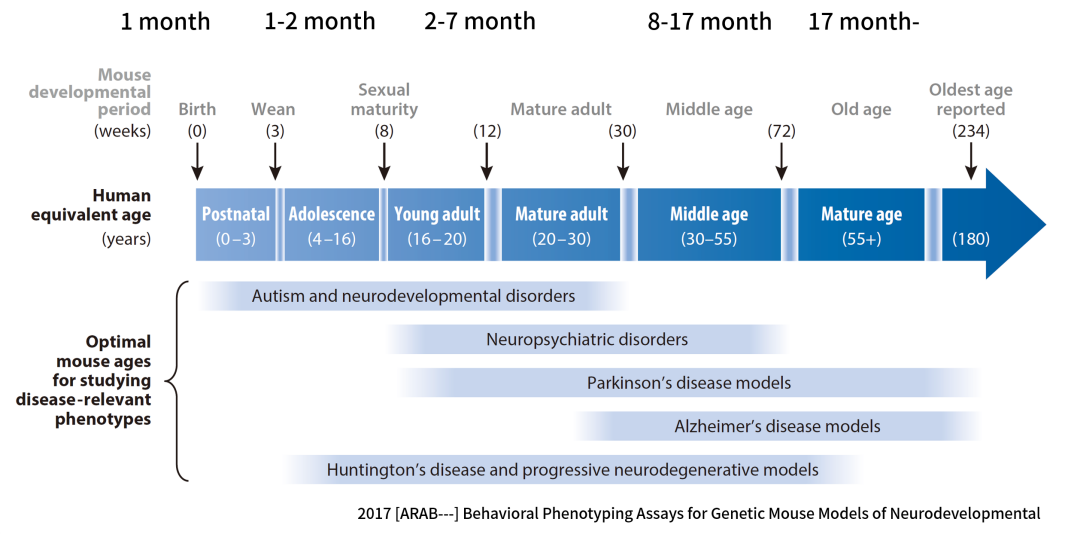 Considering the time of onset for neurodegenerative diseases, mouse models should be raised to the proper age for a particular disorder prior to conducting the corresponding experiment. For example, most experiments concerning PD are carried out on mice aged between 10 - 60 weeks, while experimental time windows for AD are mostly after 20 weeks. Genetic modification may somewhat affect the fertility and phenotype of the resultant transgenic and genetically edited mice, which may pose new requirements for the breeding and rearing of mice.

According to statistics from the numerous research papers published in the three major journals of neurobiology (Neuron, Nature Neuroscience, Journal of Neuroscience) over the previous five years, the choice of research models has revealed significant trends. In terms of model selection, rats, mice, and neural stem cells account for more than 50%, while other cell lines and non-human primates are used in a minority of cases. Among these, mice account for the highest proportion among the genetically modified models, and rats play an important role in studies of neurodegenerative diseases because which demonstrate more complex cognitive behaviors and are easier to handle. Additionally, it should be noted that in the above-mentioned publications which use mouse or rat models, methods such as immunofluorescence histochemistry, ethology, and viral transfection/tracing are of utmost importance in animal model studies. 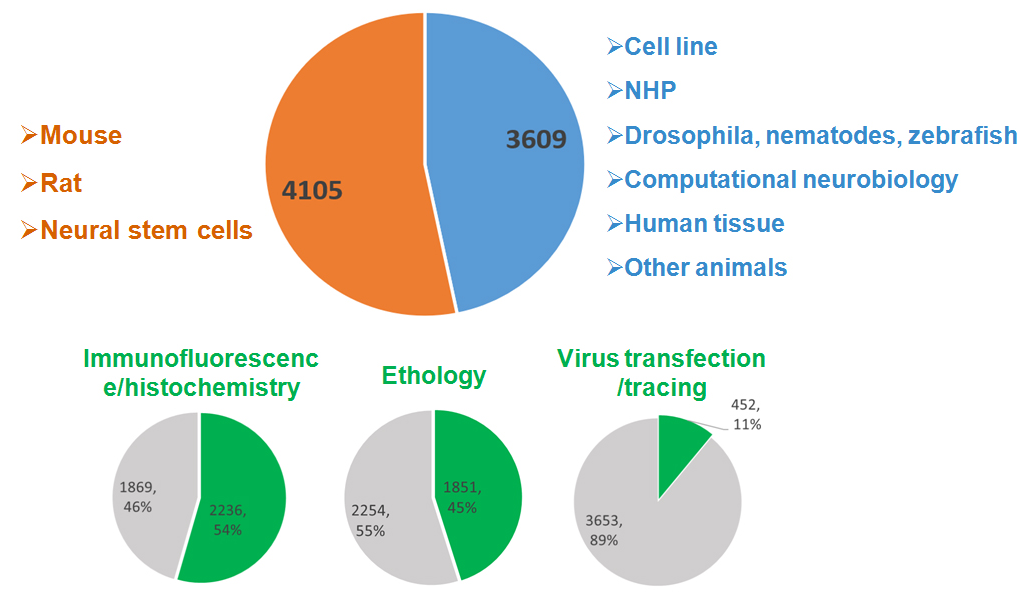 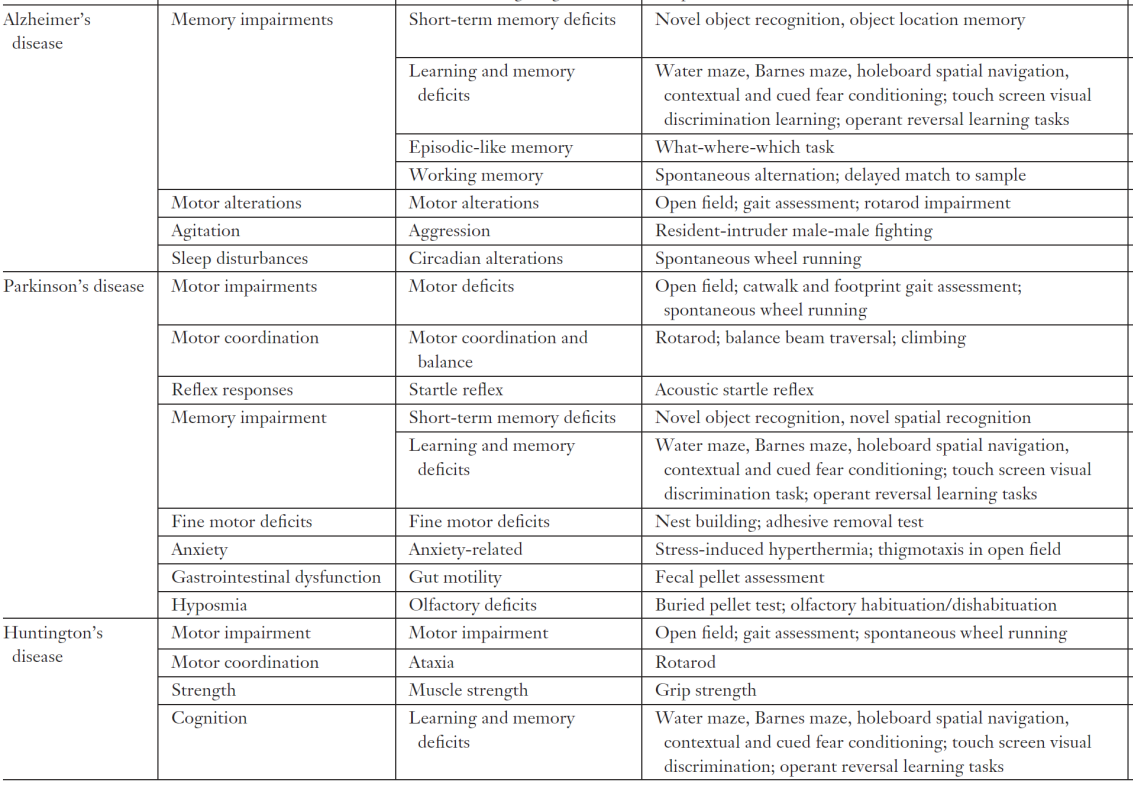 If the target site or target protein has been identified, the general experimental workflow for neurodegenerative disease research is as follows:

With more than 15 years’ experience in genetic engineering, Cyagen offers a complete range of products and services to support the advancement of neurological and neurodegenerative disease research. Cyagen is committed to enabling the development of therapeutics for neurodegenerative diseases by providing one-stop research solutions – from custom rodent model generation and breeding, through therapeutic viral packaging and injection, and phenotype analysis to study disease mechanisms, target validation, drug screening and more. 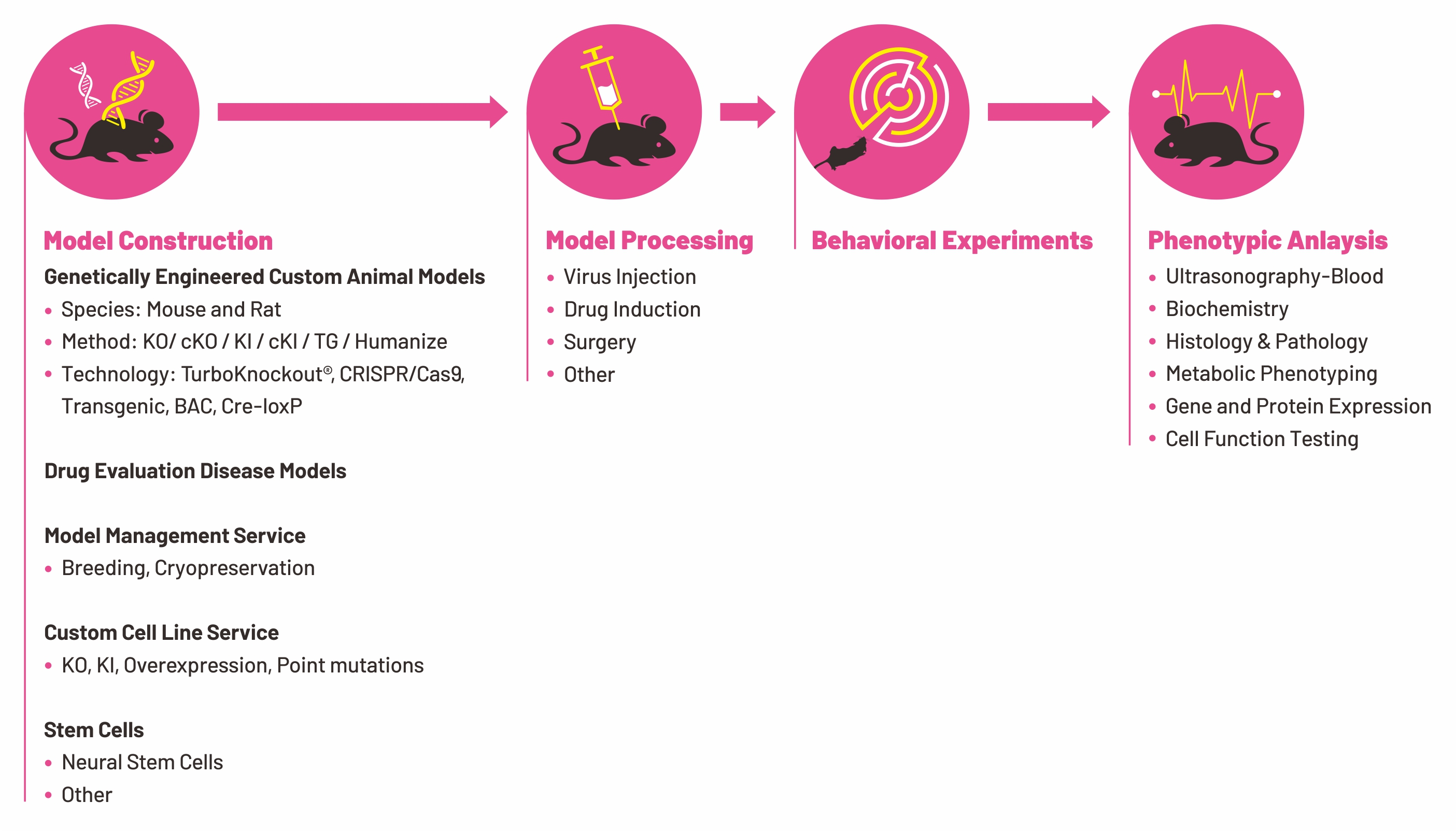 1. Both in vivo (animal) and in vitro (cell) experimental models available

Cyagen offers complete outsourcing for all your animal model needs. We can create any custom mouse or rat model with guaranteed genotype validation, even offering phenotypic characterization and other downstream services required to establish an animal disease model.

Contact us with your project details to request your complimentary model generation project consultation, strategy, and quote.