A Gene Related to Excitement- GRIA3

Humans are estimated to have upwards of 20,000 protein-coding genes, each of which plays a unique functional role in our biology. Considering the various mutations that may be present across genetic loci as well as the interplay of these factors, it may quickly become an overwhelming topic to review. To support researchers looking for regular information on genetic targets of interest, we have developed our Weekly Gene series to introduce the development trend and future direction of research across human genes. Cyagen’s Weekly Gene series provides insights into popularly researched genes, their basic information, research overview, and application background of the gene in detail.  This week’s subject is the Glutamate Receptor, Ionotrophic, AMPA 3 (GRIA3) gene, which is closely related to the feeling of excitement.

Glutamate receptors are the predominant excitatory neurotransmitter receptors in the mammalian brain and are activated in a variety of normal neurophysiologic processes. These receptors are heteromeric protein complexes composed of multiple subunits, arranged to form ligand-gated ion channels. The classification of glutamate receptors is based on their activation by different pharmacologic agonists. The subunit encoded by this gene belongs to a family of AMPA-sensitive glutamate receptors, and is subject to RNA editing. Alternative splicing at this locus results in different isoforms, which may vary in their signal transduction properties. 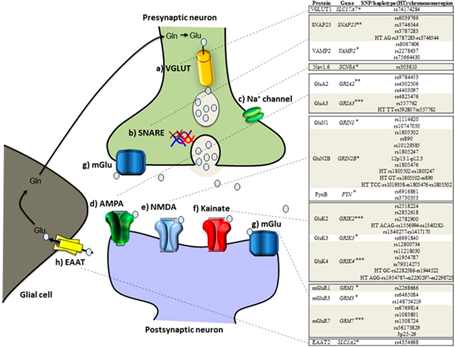 Figure 1. Glutamatergic pathway (on the left) and gene variants, haplotypes, and chromosome regions positively associated with mood disorders (on the right) [1]

Two well-established tests for male aggression in rodents, home cage resident-intruder test and dyadic male-male interaction in neutral arena, were used to evaluate aggression-related social behavior in Gria3 -/Y mice. The resident-intruder test was carried out in the individual home cage of the test mouse for its interactions with a younger, unfamiliar intruder male for 10 min. Active aggression (attacks) and passive aggression (tail rattles) and nonaggressive social interactions (sniffing and following) were recorded. Compared to WT, Gria3 -/Y mice are more likely to show aggressive behavior (76.9%, 10 out of 13 for Gria3 -/Y; 14%, 2 out of 14 for WT; chi square, p < 0.001) (Fig.2a). These mice showed a significant increase in total number of attacks (t(25)=2.61; p=0.015), duration exhibiting aggressive behavior (t(25)=2.73; p=0.011), and a shorter latency to initial first attack (t(25)=3.19; p=0.0038) (Fig. 2b-2d). (b) means and SEM of duration showing aggression in Gria3 -/Y and WT mice.

(d) means and SEM of the latency to first attack in Gria3 -/Y and WT mice. A two-way ANOVA (genotype × day) revealed that, across the last 10 sessions of operant ethanol self-administration, WT and GluR-C knock-out mice displayed a similar number of reinforced lever presses. Thus, a significant effect of the day factor was observed (F(9, 234) = 2.78; p < 0.01), whereas the group factor or its interaction with the days did not reach statistical significance (Fig. 4A). Similar results were found during extinction. Thus, a two-way ANOVA (genotype × day) only yielded a significant effect for the day factor (F(14, 364) = 2.88; p < 0.01), revealing that both groups significantly decreased the number of lever presses (extinction) across these sessions. After the establishment of a stable extinction baseline, the ability of the noncontingent reintroduction of the CS+ (light) to reinstate lever pressing behavior in both WT and GluR-C KO was assessed. This effect was evaluated as a percentual increase over the number of lever presses observed in the last extinction session of each group. A Student’s t test for independent samples comparing both genotypes revealed the increase in the number of lever presses on the previously designated active lever to be significantly higher in WT than in GluR-C knock-out mice (t(25) = 2.06; p < 0.05) (Fig. 4B)[6].

A, Mean ± SEM of ethanol (10% v/v)-reinforced lever presses per session during the last 10 self-administration sessions.

B, Mean ± SEM of lever presses in the previously ethanol-reinforced lever for each genotype elicited by a CS+ (light) after 15 extinction sessions (for details, see Materials and Methods). Open and filled symbols depict data for WT and GluR-C knock-out mice, respectively (*p < 0.05 between genotypes).

The research on Gria3 gene mainly focuses on some behavioral experiments, such as withdrawal response and aggressive behavior. However, some experiments show that Gria3 is associated with pain related pathways, while variants of the gene are known to be linked to the intellectual development disorders. Researchers with relevant research experience could publish high-quality articles by aiming to elucidate the differences among the various GRIA3 isoforms from alternative splicing and how its specific mutations influence development.

6. Sanchis-Segura, C. Involvement of the AMPA receptor GluR-C subunit in alcohol-seeking behavior and relapse.[J]. Journal of Neuroscience the Official Journal of the Society for Neuroscience, 2006, 26(4):1231-8.