Humans are estimated to have upwards of 20,000 protein-coding genes, each of which plays a unique functional role in our biology. Considering the various mutations that may be present across genetic loci as well as the interplay of these factors, it may quickly become an overwhelming topic to review. To support researchers looking for regular information on genetic targets of interest, we have developed our Weekly Gene series to introduce the development trend and future direction of research across human genes. Cyagen’s Weekly Gene series provides insights into popularly researched genes, their basic information, research overview, and application background of the gene in detail. This week we are covering the familial cold-induced autoinflammatory syndrome caused by mutations in the NLRP3 gene.

The NLRP3 gene encodes NLR Family Pyrin Domain Containing 3 - a pyrin-like protein which contains a pyrin domain, a nucleotide binding site (NBS) domain, and a leucine-rich repeat sequence (LRR) motif. This protein interacts with the apoptosis-related dot-like protein PYCARD/ASC. PYCARD/ASC contains a caspase recruitment domain and is a member of the NLRP3 inflammasome complex. The complex acts as an upstream activator of NF-κB signal and plays a role in the regulation of inflammation, immune response and apoptosis. Significantly, the NLRP3 gene encodes the sensor component to the NLRP3 inflammasome complex. 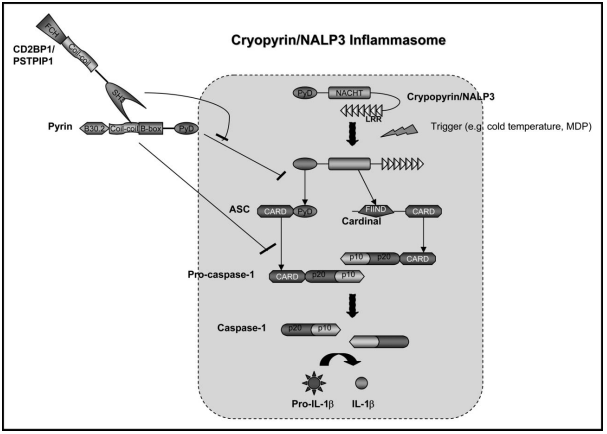 IL-1β, also known as endogenous pyrogen, is a highly inflammatory cytokine whose production is strictly controlled by at least three different steps. The first step involves the production of pro-IL-1β protein (p35); the pro-IL-1β precursor is then cleaved to produce active IL-1β protein (p17), and finally IL-1β is released into the extracellular environment. The intermediate step, the processing of pro-IL-1β, involves the activation of the caspase-1 activation complex, the best feature of which is the inflammasome. The NLRP3 inflammasome processes inactive pro-caspase-1 into active Caspase-1, which cleaves pro-IL-1β into mature IL-1β, leading to inflammation and premature cell death.

Familial cold autoinflammatory syndrome (FCAS) is a rare genetic inflammatory disease characterized by intermittent episodes of rash, fever, arthralgia, and other signs of systemic inflammation caused by exposure to cold. The onset of FCAS occurs in infancy and early childhood and persists throughout the life of the patient. FCAS is usually inherited under autosomal dominant inheritance conditions and is caused by heterozygous mutations in the CIAS1/NLRP3 gene encoding the cold protein (NALP3) protein. It is hypothesized that mutations in this gene will increase the activity of protein complexes containing cold proteins. This protein complex is called inflammasome, which can regulate inflammation in the body. Increased inflammasome activity leads to increased release of a protein called IL-1ß, which can lead to inflammatory symptoms such as fever and joint pain.

The mutations of alanine 352 to valine (A352V) and leucine 353 to proline (L353P) are closely related to patients with classic MWS and FCAS, respectively, but are not very relevant in patients with overlap syndrome. Two point mutation mouse models were generated by ES targeting technology: Nlrp3 A350V and Nlrp3 L351P. Due to the presence of Neo in the intron, the normal expression of the gene was blocked. By mating mice expressing Cre recombinase under different promoters, Neo was mediated to delete and express the mutant gene in different parts. 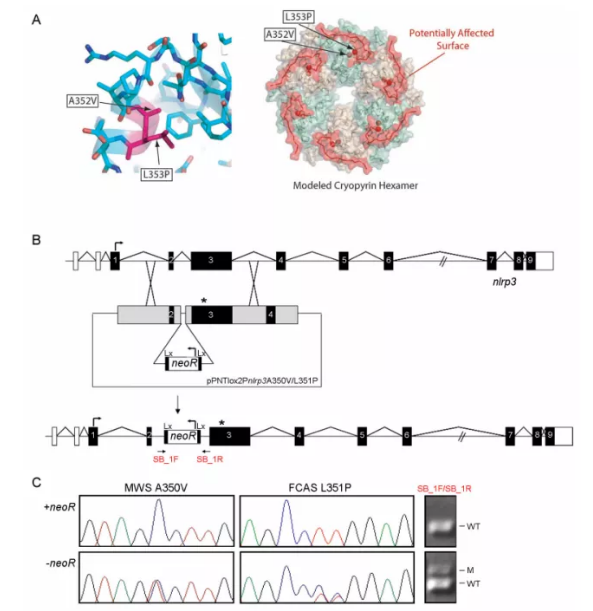 Nlrp3 A350V/+ / CreZ (deleting Neo and expressing mutant genes during embryonic period) pups show an inflammatory phenotype on or before 1-2 days after birth, with skin abscesses and scaly erythema on the 4th day (Figure 3A). In addition, these mice showed significant growth delay, lack of pigmentation and hair growth on day 4. Nlrp3 A350V/+ / CreL (the bone marrow cell line deletes Neo and expresses the mutant gene) pups show similar phenotypes but have different mortality kinetics, so 70% of these mice survive to 7-9 days, and then die at an increased rate. 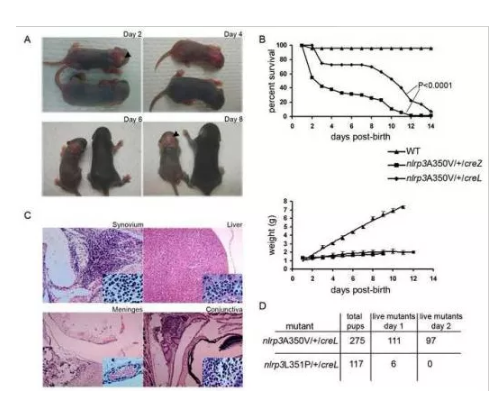 Although different from the urticaria-like lesions observed in MWS patients, the skin erythema, abscesses, and scales observed in pups expressing A350V indicate potential inflammation. The total white blood cell count of the mutant mice only slightly increased, but the neutrophils and thrombocytosis were obvious. Similar hematology and skin examination results are consistently described in CAPS patients. Inflamed skin sections from Nlrp3 A350V/+ / CreL pups were subjected to IL-1β and IL-6 immunohistochemistry. The increased expression of two cytokines (mainly IL-1β in the dermis and IL-6 in the epidermis) is consistent with skin biopsies from CAPS patients and suggests the role of these cytokines in skin pathology. There is no significant difference in TNFα, which is consistent with the previously described CAPS patients. 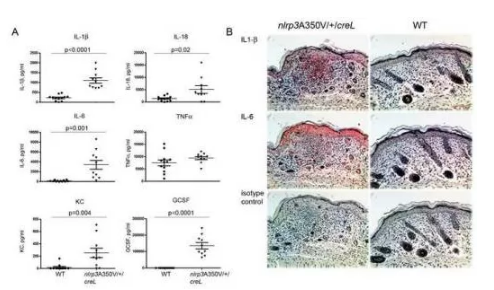 The Nlrp3 (Cias1) knockout mouse model was generated by ES targeting technology, and the purpose of knockout was achieved by inserting EGFP at the starting position of ATG:

In most cases, CAPS is caused by mutations in the NLRP3 gene. The altered gene product cryopyrin activates the inflammasome, leading to the overproduction of IL-1β. IL-1β causes the inflammatory manifestations of CAPS. IL-1 inhibitors are a safe and effective treatment option. With the advent of IL-1 inhibitors, it provides a safe and effective treatment option for this devastating disease.

Non-steroidal anti-inflammatory drugs are often used to relieve joint pain. High-dose corticosteroids have been shown to be effective to some extent, but they may cause short-term and long-term side effects.

Regeneron Pharmaceuticals' Arcalyst (Rilonacept) is an IL-1 blocker that was approved by the FDA in 2008 for the treatment of CAPS in adults and children 12 years and older, including FCAS and MWS.

Novartis' Ilaris (Canakinumab), a monoclonal antibody against IL-1β. It was approved by the FDA in 2009 for the treatment of children and adults with CAPS, including FCAS and MWS.

Kineret (Anakinra) from Biovitrum Pharmaceuticals is an IL-1 receptor antagonist, which has been widely used in FCAS patients with excellent clinical effects. However, it is currently not approved by the FDA for the treatment of FCAS or any CAPS disease.

Future research will need to address how activating mutations in cryopyrin circumvent the normal regulation of inflammasomes to produce inflammatory diseases, such as familial influenza autoinflammatory syndrome, Muckle-Wells syndrome, and chronic infantile neurologic cutaneous and articular syndrome (CINCA). An intriguing possibility is that low-level bacterial infections coupled with dysregulated hot and cold protein responses can trigger symptoms associated with these diseases.